Latest
by Cian Nelson
2018 saw yet another action-packed year of Camogie action with some familiar faces lifting the all-important pieces of silverware along the way.
January saw an early start to the intercounty season as the Littlewoods Ireland Camogie Leagues began with 11 counties getting Division 1 underway in mid-January. January also saw the Semi-Finals of the AIB All-Ireland Senior and Intermediate Club Championships take place with crucial places in March's Finals at stake.
In February, after a snow delay, the Ashbourne Finals took place with UL lifting the Ashbourne Cup, St. Mary's claiming the Fr. Meachair title and NUIG winning the Purcell Cup. The 2017 Camogie Association Volunteer & Media Awards also took place to honour the contibution of a wide range of volunteers and the media who contribute so greatly to the game.
February also saw the Association agreed a draft Memorandum of Understanding with the GAA that will seek to establish stronger links between the two organisations over the next three years.
In March, Slaughtneil of Derry claimed the AIB All-Ireland Senior Club Championship title for the second year running following victory over Sarsfields of Galway in the Final in St. Tiernach’s Park. The big freeze had previously seen two attempts to have the fixtures played in Croke Park ultimately succumb to the poor weather. On the same day Kildare’s Johnstownbridge won their very first All-Ireland Intermediate Club Championship title as they saw off Athenry of Galway. This completed a remarkable three-in-a-row for the Kildare side as they added to their back-to-back Junior All-Ireland that saw them promoted to the Intermediate ranks which they then claimed at the first time of asking.
March also saw the Semi-Finals of the Littlewoods Ireland Camogie Leagues take place as Cork and Kilkenny andvanced to the Final with wins over Limerick and Galway respectively. The O'Neills All-Ireland Schools Finals also took place as Loreto of Kilkenny claimed the Senior A All-Ireland title. 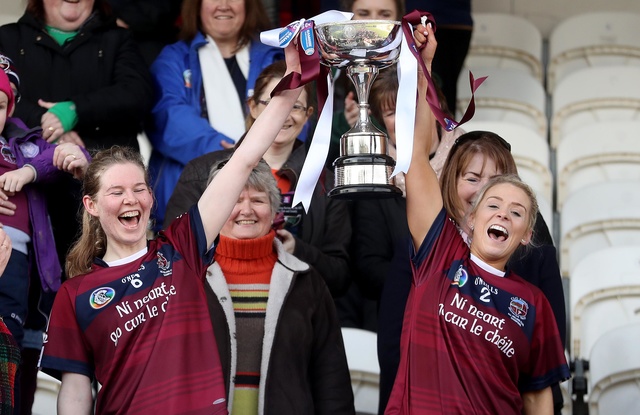 April saw Kilkenny claim the Littlewoods Ireland Camogie Leagues Division 1 crown for the third year in-a-row with a one-point victory over Cork in the Final in Nowlan Park, whilst Cork won the Division 2 title and Kerry took home the Division 3 honours.
The Association's Annual Congress also took place in April in Mount Juliet, Co. Kilkenny where many motions relating to the playing rules as well as the official guide were considered. Kathleen Woods of Armagh was inaugurated as the president of the Association, taking over from Catherine Neary who completed her term with Annual Congress in her home county.
The annual Camán to Croker development event took palce as the hallowed turf of Croke Park played host to over 1,150 girls from all over Ireland for an unforgettable experience!
April also saw Cork claim their very first All-Ireland Minor A Championship title as Antirm collected the Minor B title.
May began as the standout performers in the Littlewoods Ireland Camogie Leagues were honoured for their performances in 2018 at the Player of the League Awards. Kilkenny's Katie Power collected the Division 1 award, Sheila McGrath of Westmeath won the Division 2 Award and Roscommon's Niamh Farrell claimed the Division 3 honours. May also saw Connacht retain their Senior Interprovincial title with a Final victory over Leinster.
Ahead of the All-Ireland Championships, sponsors Liberty Insurance announced a major new deal to continue their sponsorship of the Championships for a further three years in a landmark deal for the Association. 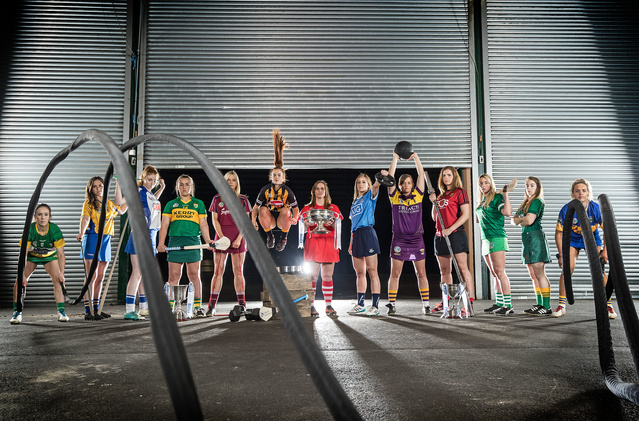 June saw the Liberty Insurance All-Ireland Championships get underway to set the theme for another fantastic summer as Cork set out ot defend their Senior crown.
The John West Féile na nGael also took place in June where Galway played host to a wonderful weekend of Camogie action for thousands of children from throughout Ireland and abroad.
As the heat of July came around the All-Ireland Championships began to heat up too, and it was the familiar duo of Cork and Kilkenny who topped their respective groups in the Senior Championship to progress directly to the Semi-Finals. It was Dublin, Galway, Tipperary and for the very first time Waterford who qualified for the Quarter-Finals from pulsating groups.
The O'Duffy Cup also took in the sun throughoput the summer as it visited a host of locations throughout all four provinces as part of the #GoTogether campaign.
August got underway with a bang as the All-Ireland Senior Championship Quarter-Finals took place in Páirc Uí Chaoimh. Galway and Tipperary would ultimately prevail with impressive wins over Dublin and Waterford respectively. Next in wait lay Cork and Kilkenny in the Semi-Finals in Semple Stadium.
The Cats edged Galway in a tight encounter where a Katie Power goal rounded off a great team move that ultimately proved decisive in securing victory. Cork then proved too strong for a valiant Tipp side who stuck with them until the second-half before the Rebels' experience saw them pull away to book their familiar passage to Croke Park.
In the Intermediate Championship Semi-Finals Cork saw off Galway to join their Senior counterparts before Down caused one of the shocks of the summer as they beat a high-flying Tipp side in a dramatic encounter.
The Premier Junior Semi-Finals then completed September's Finals line-up as Dublin beat Offaly to book a shot at avenging their 2017 Final defeat, before Kerry made history to make it to Croke Park for the first time as they defeated Roscommon.
There were still All-Ireland medals to be won in August as the All-Ireland Under 16 titles were decided. Galway claimed the Under 16A honours, Antrim the Under 16B crown and Carlow the Under 16C title.
August also saw Galway's Susan Earner retain her All-Ireland Poc Fada crown as she topped the field in the Annaverna Mountains. Galway also claimed the Under 16 title as Maeve Muldoon saw off her rivals to make it a great day for the westerners.
September saw a thrilling Liberty Insurance All-Ireland Championship culminate with Cork retaining the O’Duffy Cup to claim it for a record 28th time by winning the Senior Final against their great rivals Kilkenny by just a single point for the second year running. A late Orla Cotter point was all that could separate the two sides in the latest epic installment of their Final meetings in recent years.
Dublin got the day off with a bang by claiming their first Premier Junior title since 2006 with an impressive win over Kerry on what was a great day’s action in front of a bumper crowd of over 21,000 in Croke Park.
Cork then prevailed against Down in the Intermediate Final, their first Intermediate title since 2006 to set the Rebel County up for a famous Senior & Intermediate All-Ireland double.
November started with the Camogie All-Stars Awards sponsored by Liberty Insurance. where Senior All-Ireland champions Cork lead the way with seven winners, followed by Kilkenny with five and Galway, Tipperary and Waterford with one each. Kilkenny's Anne Dalton scopped the Senior Player's Player of the Year Award whilst Paudie Murray collected his third Manager of the Year Award.
Meath's Kilmessan claimed back-to-back AIB All-Ireland Junior Club Championship titles as they defeated Four Roads of Roscommon whilst Ratoath made it a Meath double by claiming the inaugural Junior B title.
To round the year off Camogie and Hurling secured the landmark achievement of being inscribed on the UNESCO Representative List of the Intangible Cultural Heritage of Humanity. This prestigious international recognition illustrates the integral role which Hurling and Camogie play in Irish life and the great history associated with our games.
Eyes now turn to 2019 to see who will be writing their own piece of history. It all begins again in January as the Littlewoods Ireland Camogie Leagues get underway on Sunday January 20th!
We can't wait!