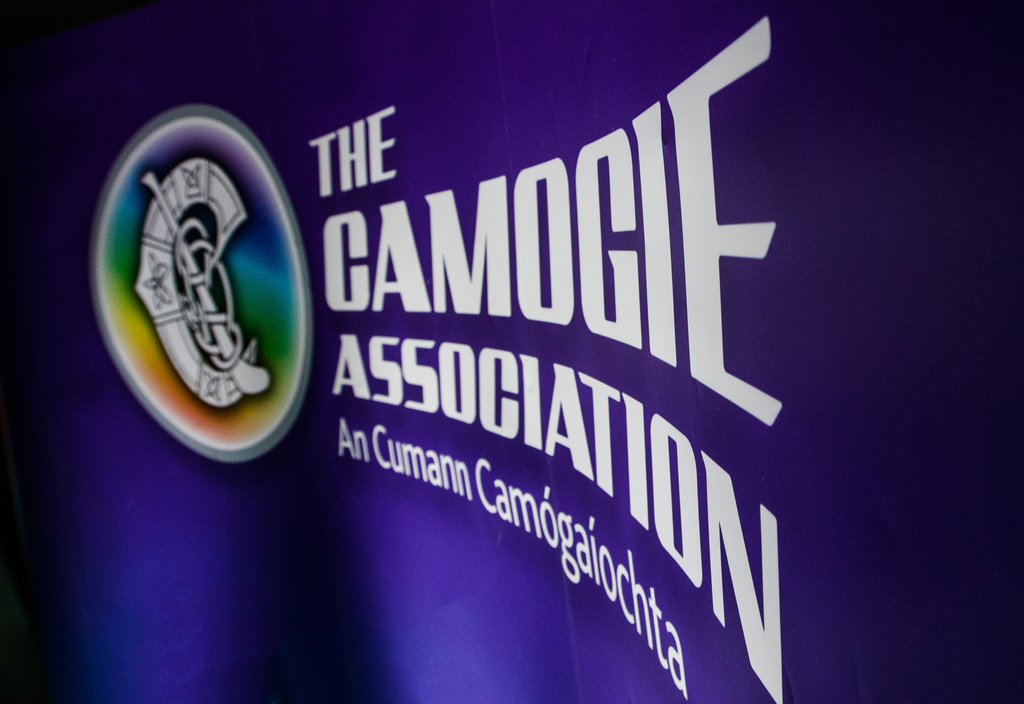 The Association was founded in 1904 and since then we have witnessed some historic moments within our sport. Below are some of the significant moments since our inception.

In 1932, twenty-eight years following the foundation of the Camogie Association, the first All-Ireland championship was played. The Tailteann Games of 1928 and 1932 whetted the appetite of players for competition of a higher standard than that provided at club level.

Ten counties entered for the inaugural All-Ireland championship which was organised on an open draw basis. Mayo man, Seán O’Duffy, donated a silver cup, known as the O’Duffy Cup, for the championship.

Fashion and Style of Play

Players lined-out wearing gymfrocks that covered the knee, long black stockings, canvas boots, long-sleeved blouses and a belt or sash around the waist. The shape of the hurley lent itself to good ground strokes and the play was predominantly on the ground. A glance at the early scores shows that players concentrated on scoring goals. The majority of points registered came from placed balls.

Dublin’s superior attack was the deciding factor when they met Galway in the 1932 All-Ireland final at the Sportsfield, Galway. On the score of 3-2 to 0-2, Dublin claimed the first All-Ireland title. The first thirteen titles were shared between Dublin (7) and Cork (6). Significantly, these were the two centres where the game flourished at school and university level. Dublin and Cork produced contests of a remarkably-high standard. The stars of that era were among the best that the game has known.

The Camogie Association was torn by disagreements in the Forties. Neither Dublin nor Cork participated for a number of years. This left the way clear for new champions. Antrim stepped up to the challenge and achieved a three in-a-row with polished players in Marjorie Griffin, Celia Quinn, Peg Dooey, Kathleen Rainey, Nancy Milligan and Marie O’Gorman.

While Dublin remained outside the Association, the C.I.E. club affiliated direct to Central Council and was allowed to represent the county in 1947 and 1948. On their second attempt, C.I.E. carried off the All-Ireland title, a remarkable feat for a single club. Two of the most famous exponents of the game, Kathleen Mills and Kathleen Cody, played in the colours of C.I.E. Kathleen Mills stepped on to inter-county stage as a fifteen-year-old in 1942. When she called it a day in 1961, she had collected fifteen All-Ireland senior medals.

Dublin’s return to the playing fields in 1949 marked the start of a glorious run. Eighteen All-Ireland senior titles were captured in nineteen years. Exceptional talent was available to the Dublin selectors. It was superbly utilised by their Cork-born coach, Nell McCarthy. Teamwork, skill and confidence were the hallmarks of those great Dublin sides. In addition to Kathleen Mills and Kathleen Cody, Dublin had shinning stars in Sophie Brack, Una O’Connor, Eileen Duffy, Annette Corrigan, Judy Doyle, Kathleen Ryder, Eithne Leech, Betty Hughes and Ally Hussey.

Against all the odds, Antrim put a fine side together in 1979. Unable to prepare as they would have liked owing to the political situation, the Antrim girls brought the O’Duffy Cup to Ulster for the sixth time. Carol Blayney, Jo McClements, Ann McAllister, Rita Moran, Mary McMullan and Siobhán McAtamney were the exciting newcomers who showed skill and courage in clinching victory.

Several counties sought to take advantage when Kilkenny lowered Dublin’s colours in the 1968 Leinster championship. It was an unknown Wexford side that availed of the opportunity and won the All-Ireland championship at their first attempt.

A young and highly-talented Kilkenny outfit burst on the scene in 1974. In twenty-one seasons, Kilkenny amassed twelve titles and shot into third place on the Roll of Honour. A team that included Liz Neary, Ann Carroll, Angela Downey, Bridie Martin, Mary Fennelly and the O’Neill sisters, Teresa and Helena, made the initial breakthrough. Ann Downey, Jo Dunne and Mary Canavan joined the side for the 1976 and 1977 victories. The winning 1981 side embraced Margaret Farrell, Biddy O’Sullivan and Anna Whelan.

Cork were back in the winners enclosure in 1978 with a well-prepared side. Clare Cronin, Mary O’Leary, Cathy Landers, Angela Higgins, Mary Geaney and Nancy O’Driscoll were equipped with flair and style to win impressively. Cork victories in 1980, 1982 and1983 introduced Sandie Fitzgibbon, Martha Kearney, Eileen Dineen, Ger McCarthy and Val Fitzpatrick.

A barren period of eighteen years came to an end for Dublin. 1984 was the only bright note on the long road in search of former glory. Yvonne Redmond, Marion Conroy, Edel Murphy, Bernie Toner, Una Crowley, Mary Mernagh and Germaine Noonan lifted the spirits of Dublin fans with title number twenty-six.

A new Cork team was in place when Sandie Fitzgibbon mounted the steps of the Hogan Stand to receive the O’Duffy Cup in 1992. Kathleen Costine, Breda Kenny, Therese O’Callaghan, Colette O’Mahony, Linda Mellerick, Liz Towler, Paula Goggins, Irene O’Keeffe, Denise Cronin and Fiona O’Driscoll carried on the great tradition of Cork sides. Lynn Dunlea made a big impression when the joined the winning team of 1993. Eithne Duggan stepped in as full-back in 1995 and Vivienne Harris showed when she on as a substitute that she was there to stay. Cork’s success in 1997 featured exciting young players, Mary O’Connor, Sinéad O’Callaghan and Cora Keohane.

A succession of excellent minor and junior Galway teams held promise of a senior breakthrough. In 1996, Imelda Hobbins carried the O’Duffy Cup across the Shannon for the first time to signal Galway’s arrival. Sharon Glynn, Denise Gilligan, Pamela Nevin, Martina Harkin, Olive Costello and Louise Curry had made the grade. 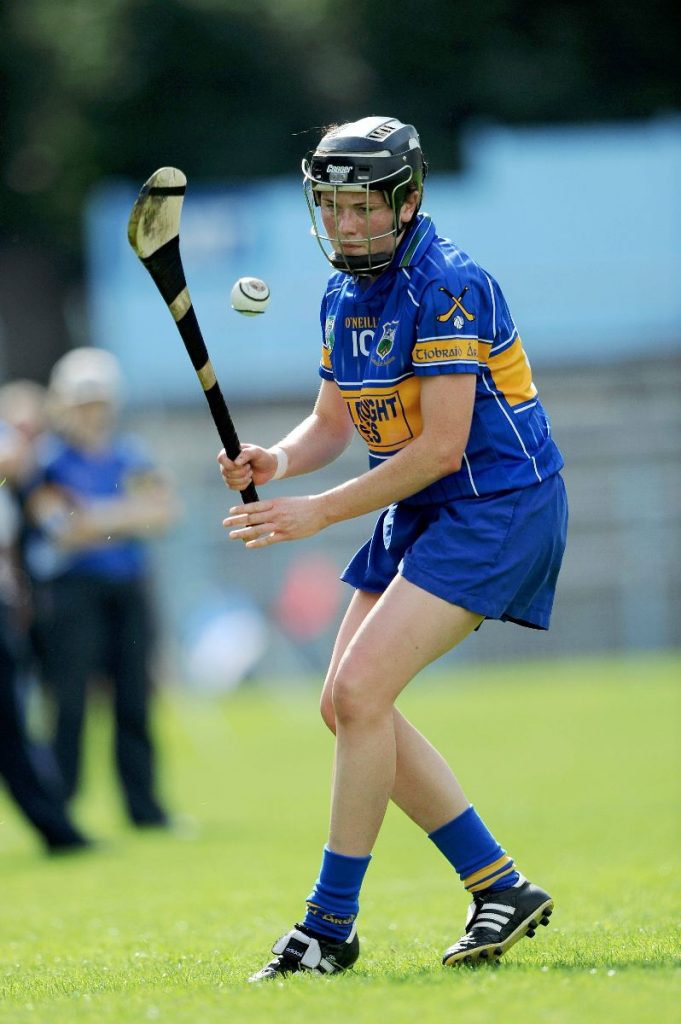 A Tipperary player focuses on striking the sliotar

Possessing direct links with the victorious Wexford sides of the past, a new generation of players burst on the scene and captured three titles in five years, 2007-2011. Built around the Colaiste Bríde teams that won All-Ireland Colleges crowns, the new Wexford side was a serious outfit. The Leacy sisters, Mary and Una, Mags D’Arcy, Kate Kelly, Catherine O’Loughlin, Ursula Jacob and Katrina Parrock brought excitement to the game.

The game itself developed considerably over the years. Early exponents concentrated on ground-play. With the result, the majority of scores were goals. Points usually resulted from free-taking. The Dublin teams of the Fifties and Sixties brought teamwork to a very high level and proved unbeatable by sides which neglected this vital aspect of the game. Cork, Kilkenny, Tipperary and Wexford added new skills and innovations and facilitated the evolvement of the game. Higher levels of fitness were required as players wished to run with the ball at every opportunity. The introduction of the fifteen-a-side game brought camogie closer to hurling.

Today’s camogie stars are accomplished athletes, who demonstrate amazing levels of skill, fitness, ball control and technique. They represent their county with passion and pride and aim at the highest standards.

Rather surprisingly, they are the only four teams to make the senior decider in that decade with Cork and Kilkenny leading the way with six appearances each, while Galway made the decider five times and Wexford three times.

In the Intermediate Championship it was a very different story, where there were ten different winners of the competition in the same amount of finals.

Unlike the Senior Championship, there were a host of counties take part in Intermediate showdowns in the decade with 13 different counties qualifying for their respective finals, with six Leinster counties (Offaly, Wexford, Kilkenny, Kildare, Meath and Westmeath), three Ulster counties (Antrim, Derry and Down), three Munster counties (Limerick, Waterford and Cork) and one Connacht county (Galway) in the deciders.