500+ Girls to Participate in All Ireland U17 National Competition

500+ Girls to Participate in All Ireland U17 National Competition

Latest
500+ Girls to Participate in All Ireland U17 Competition
Over 500 Under 17’s from 10 teams and 9 counties will take part in the Annual National Under 17 Competition this Saturday August 19th. The competition will be split into a cup and shield section. The cup section will be held in Limerick IT and the shield section in Nurney, Kildare. Thanks to both grounds for the use of their facilities and we look forward to a great day of camogie.
In other Camogie Development News:
·       U16 Progress to Success Competition at Final Stage
·       Golden Ticket Trip
·       Leinster Minor 7 a Side
·       Roscommon Camogie Camp
·       O’Moore’s Camogie Camp
·       Round Towers Kildare Receive Start-up Grant
·       Kilcullen is Kildare’s newest Camogie Club
·       Coill Dubh Cul Camp
U16 Progress to Success Competition at Final Stage
The Camogie Association’s ‘U16 Progress to Success’ National Competition is down to the final stage.
Last Saturday the ‘Progress to Success’ Semi-Finals saw Mayo winning out to Donegal in Sligo and Wicklow getting the better of Monaghan in Dublin after Monaghan had a great quarter final win previously against Louth. This is a fantastic competition for all teams and highlights the tremendous work undertaken at grassroots level.
‘Progress to Success’ is an important programme for Under 16 Inter County players to transition from the Camogie Under 14 Development Squad system so congratulations to Wicklow, Donegal, Louth, Mayo, and Monaghan who all took part in this year’s competition.  A big thank you to the players, their talented and passionate management teams as well as the exceptional mentors for their commitment to this programme. Best of luck to Mayo and Wicklow in the Final. 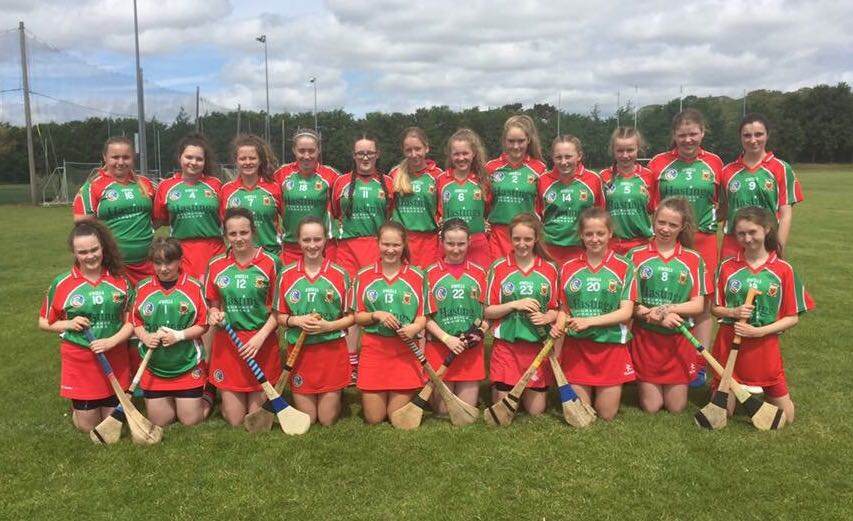 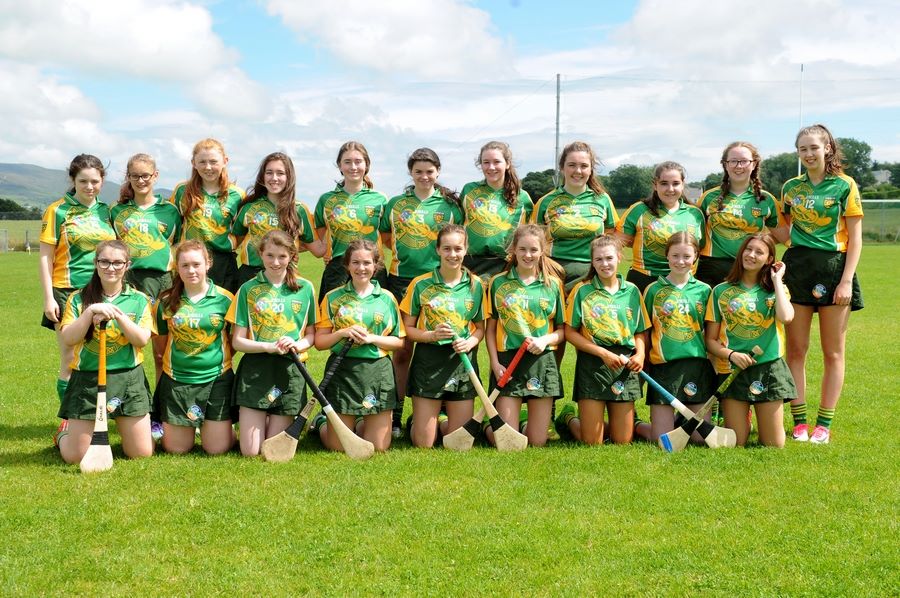 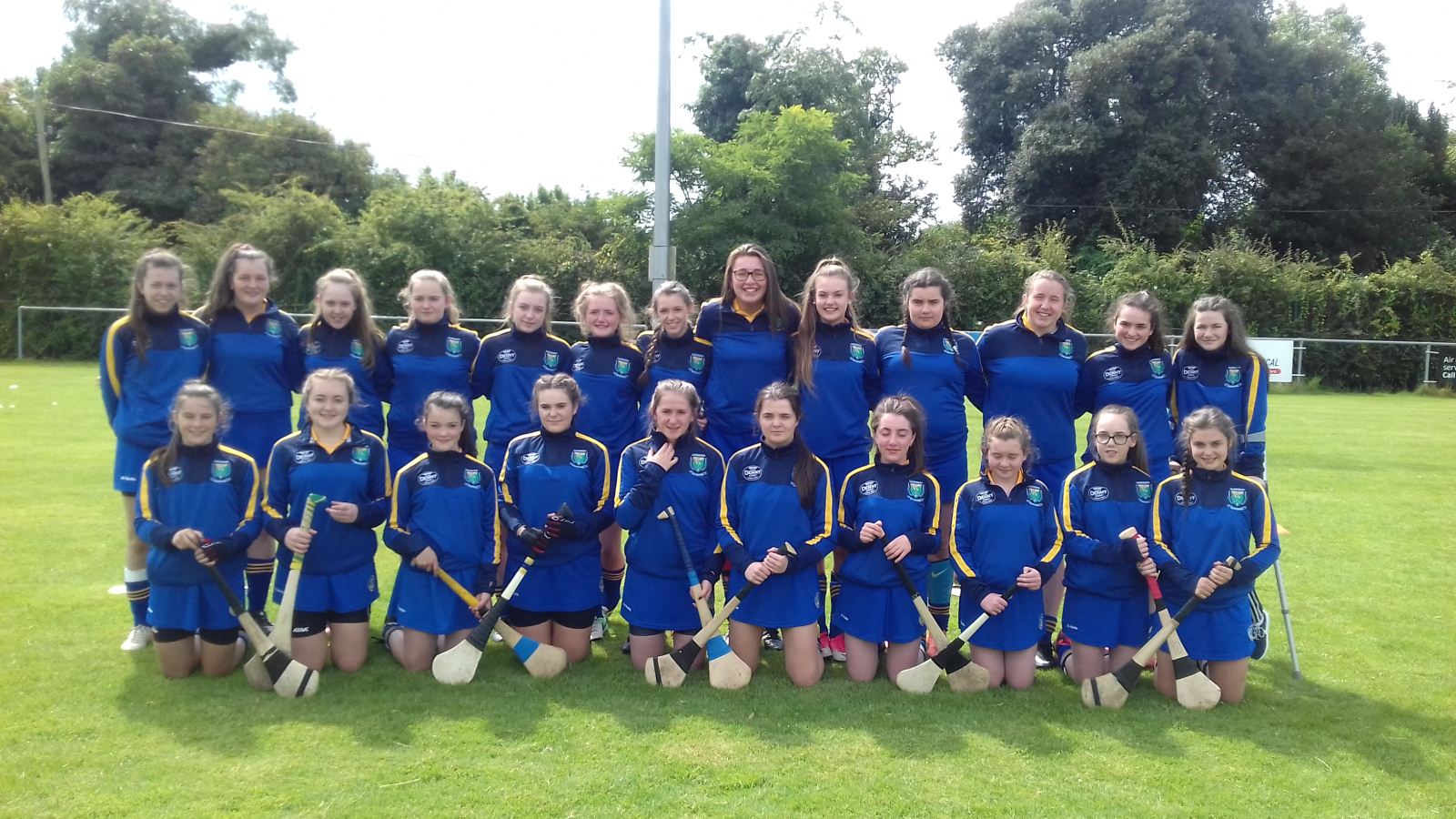 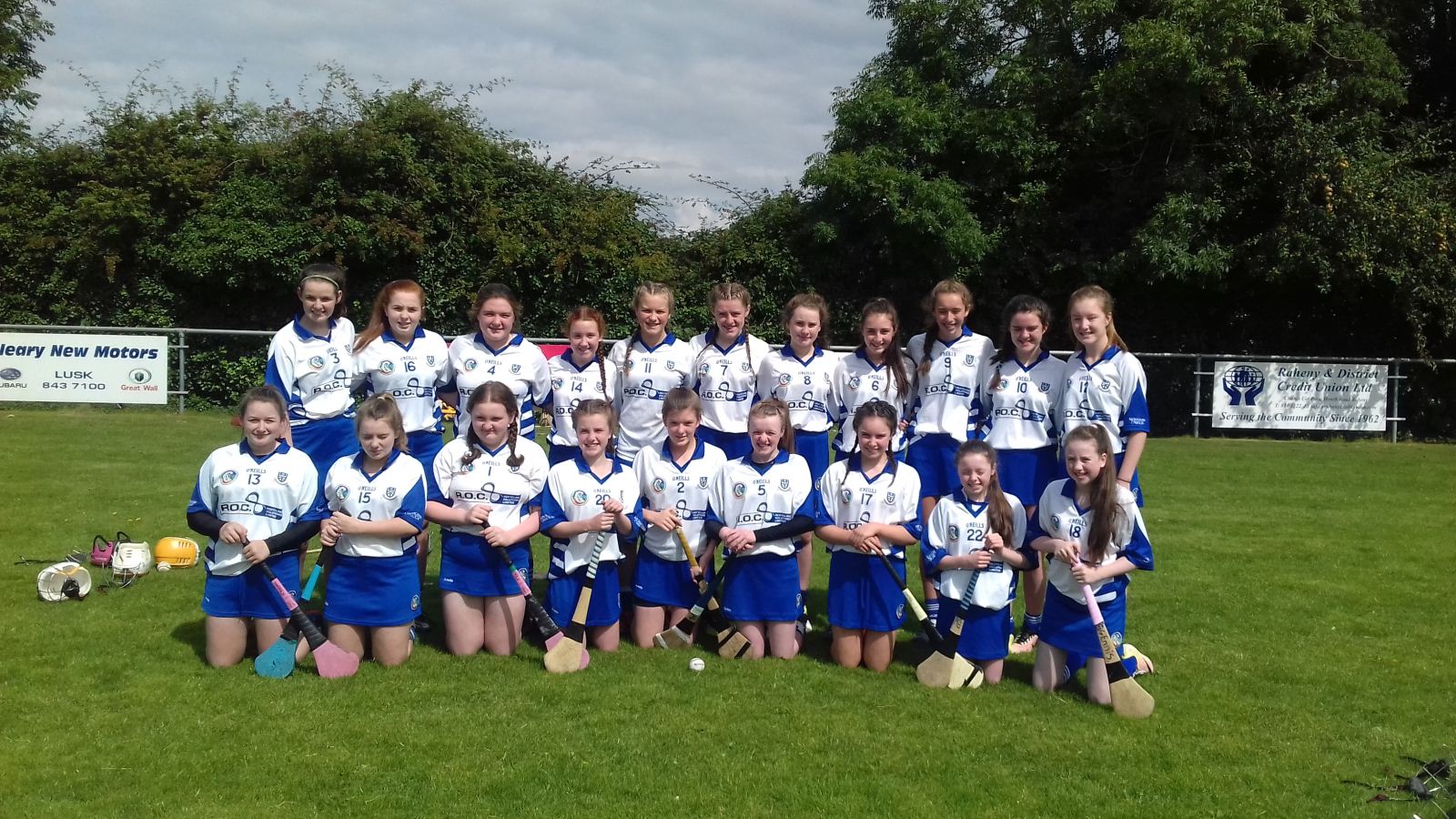 Monaghan U16
Semi-Final Results:
Mayo 8.14 vs Donegal 0.00
Wicklow 5.6 vs Monaghan 1.6
Final: August 27th – Wicklow V Mayo
Golden Ticket Trip
Well done to the 17 teams that took part in the Super 10’s Blitzes as part of the Golden Ticket Trip last weekend ahead of the Liberty Insurance Premier Junior Semi Finals last weekend.
9 teams participated in a blitz held in Cavan Gaels and 8 participated in a blitz held in Mungret St.Pauls in Limerick.
All teams will now enter the draw for €1000 to be held in Croke Park on All Ireland Final day on September 10th. The winning team will also do a lap of honour of the pitch on the day.
Further Super 10 blitzes will take place this weekend ahead of the Senior and Intermediate Semi-finals. 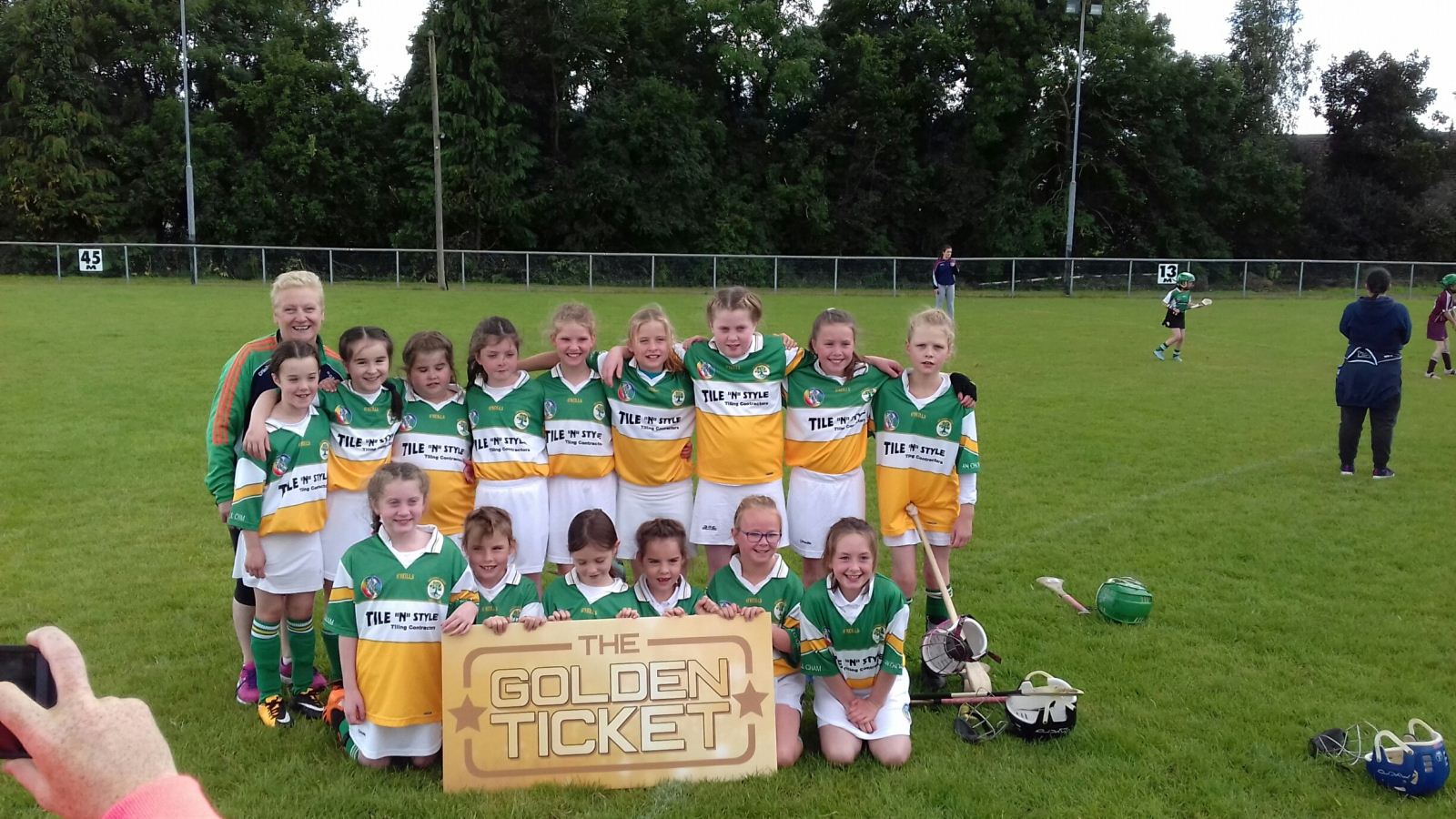 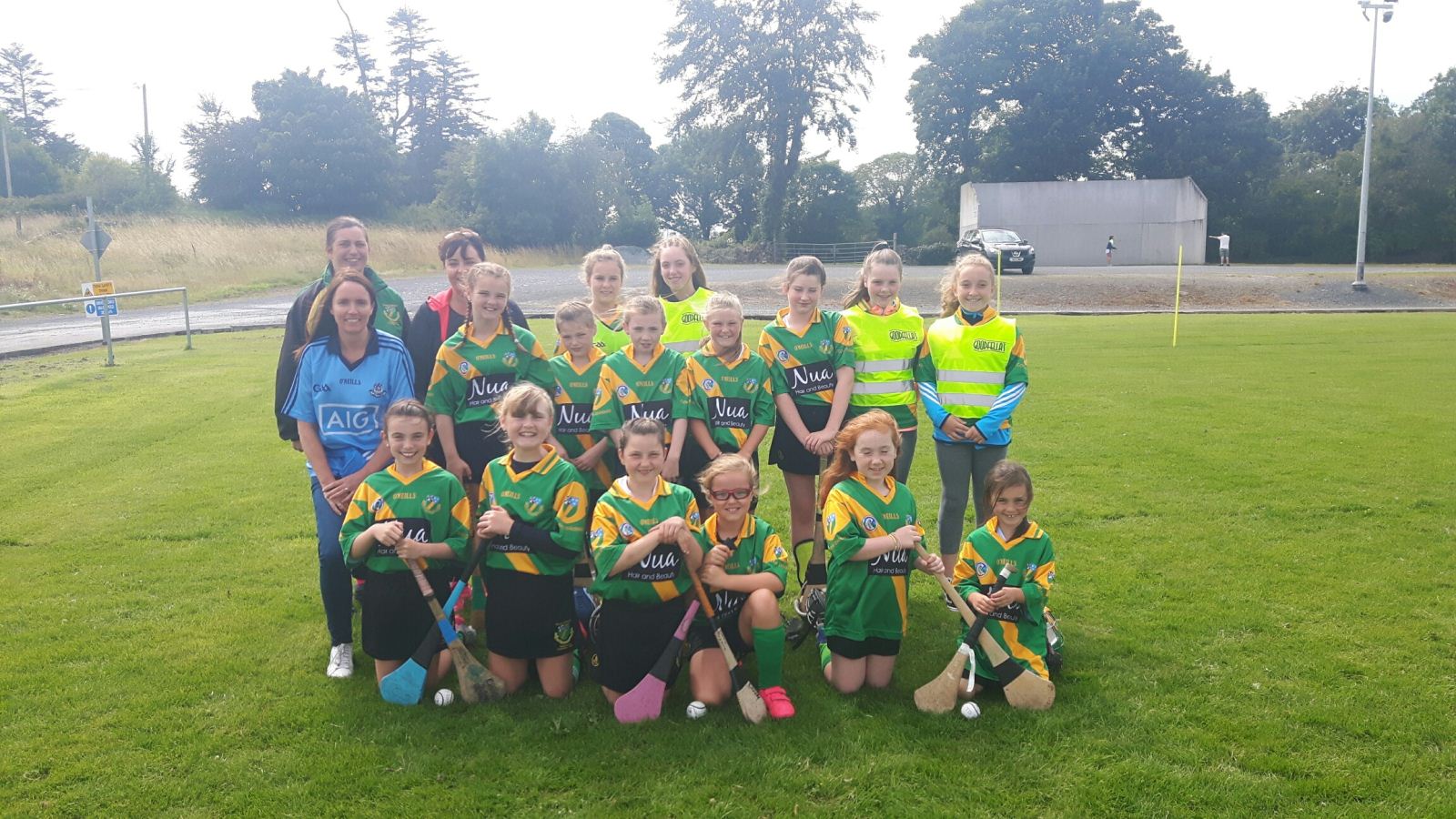 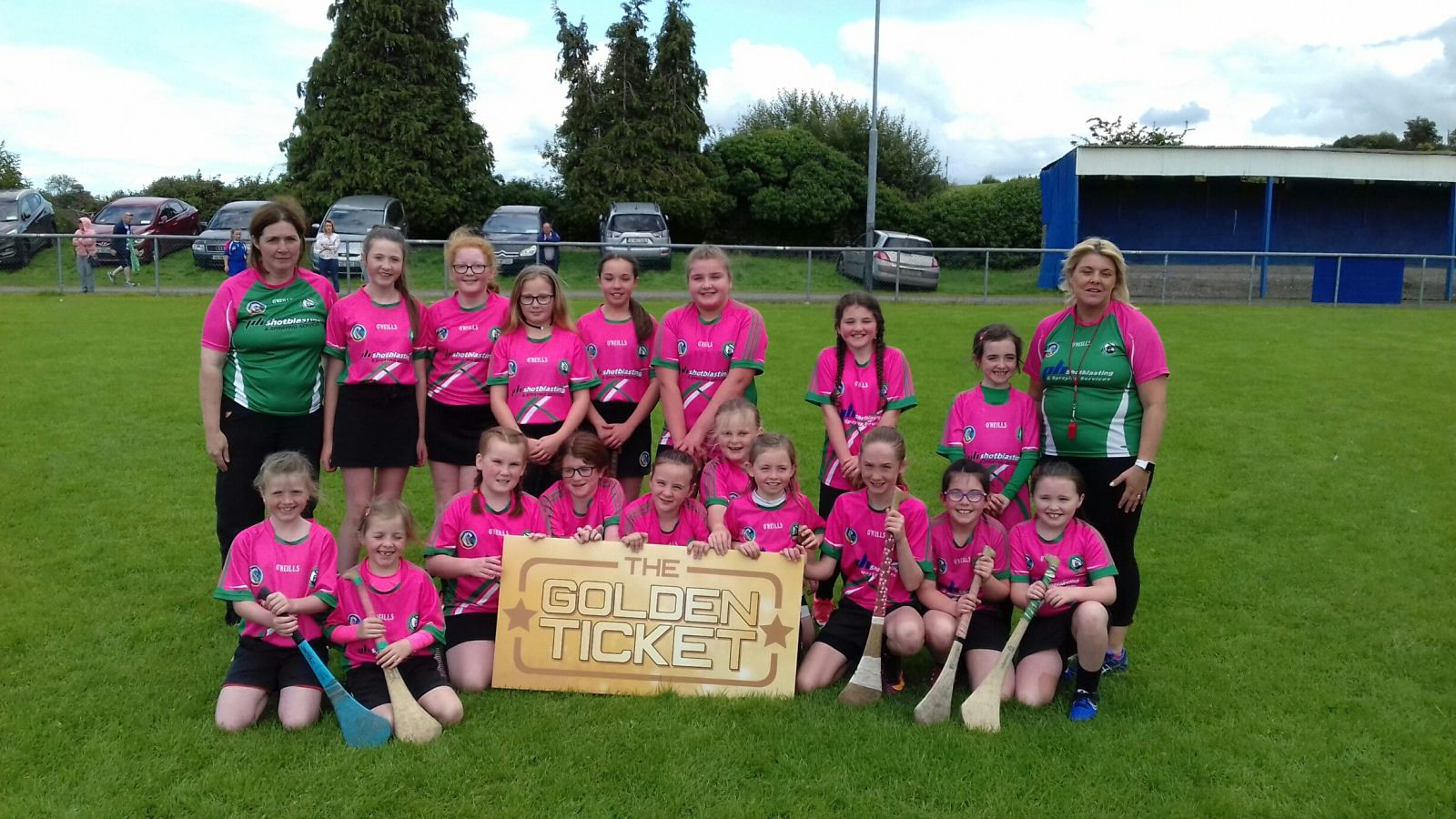 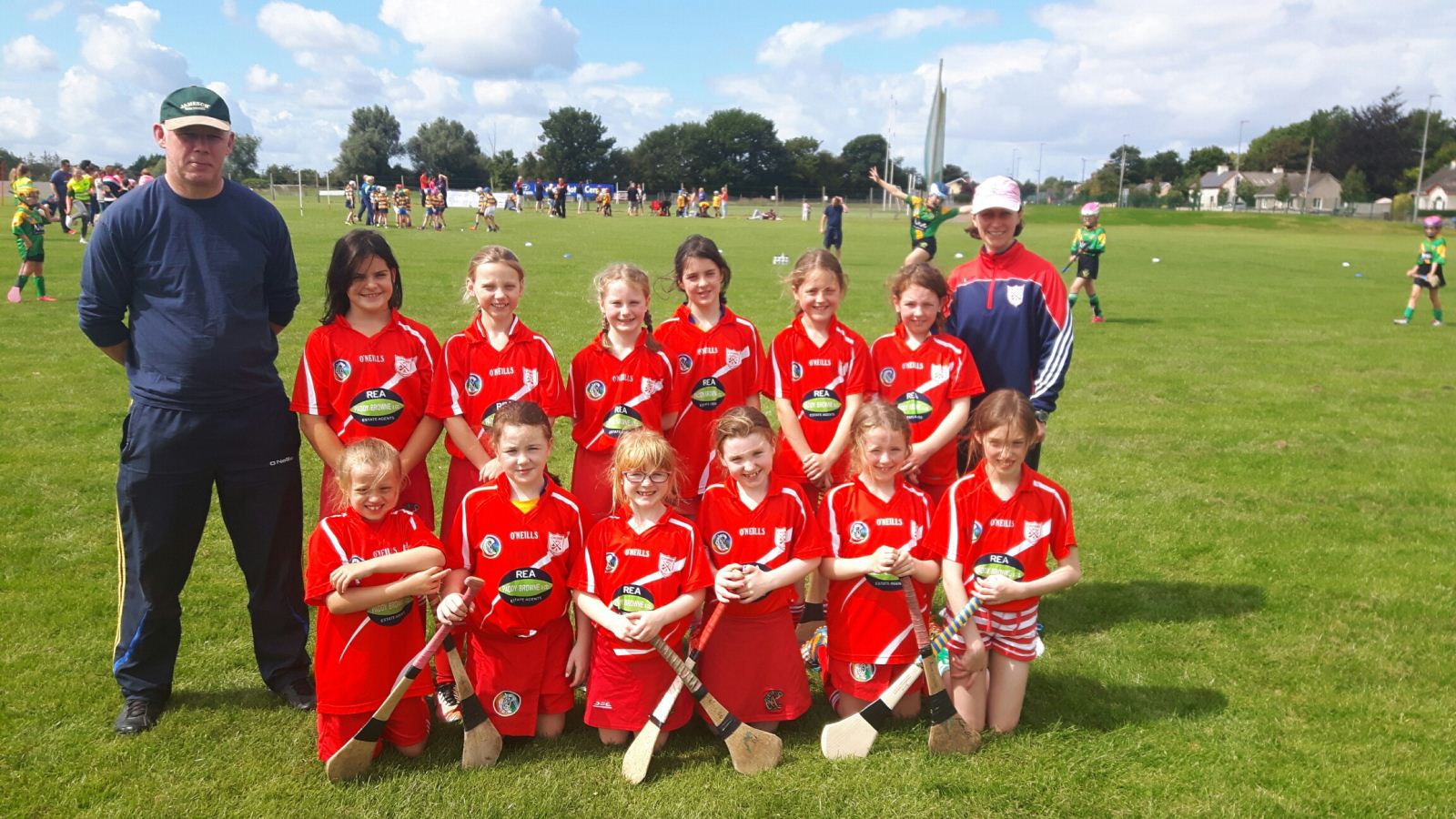 Crusheen Clare
See Golden Ticket Trip album of photos:
https://www.facebook.com/pg/OfficialCamogieAssociation/photos/?tab=album&album_id=10155039204086492
Leinster Minor 7-a-side
On Saturday August 12th 9 minor club teams from across Leinster took part in a 7-a-side competition in Rathleague, Portlaoise. With the sun shining, 90 girls enjoyed an action-packed day of camogie. With many of these clubs now preparing for their Minor club championship to kick off, it was a great opportunity for them to get the girls playing together.
Division 2 hosted 5 clubs representing Mattock Rangers (Louth), Knockananna (Wicklow), Rathgarogue Cushinstown (Wexford), Windgap (Kilkenny) and O’Moores (Laois). With each playing at least four games, girls got plenty of game time. The final saw Knockananna and Windgap battle it out, with the Kilkenny side holding strong in the finish.
Division 1 included Naas, Glynn Barntown, Rathnure and Portlaoise play off in the group, which ended in a very competitive final between near neighbours Glynn/Barntown and Rathnure.  Rathnure came out on top on this occasion on a score of 6-11 to 4-3. Best of Luck to all in your minor championship.  Well done to Sabrina Larkin (Camogie participation & growth officer for Leinster) and Angela Gahan (Leinster Development Officer) who have organised and ran this along with the U16 provincial 7-a-side held in July. 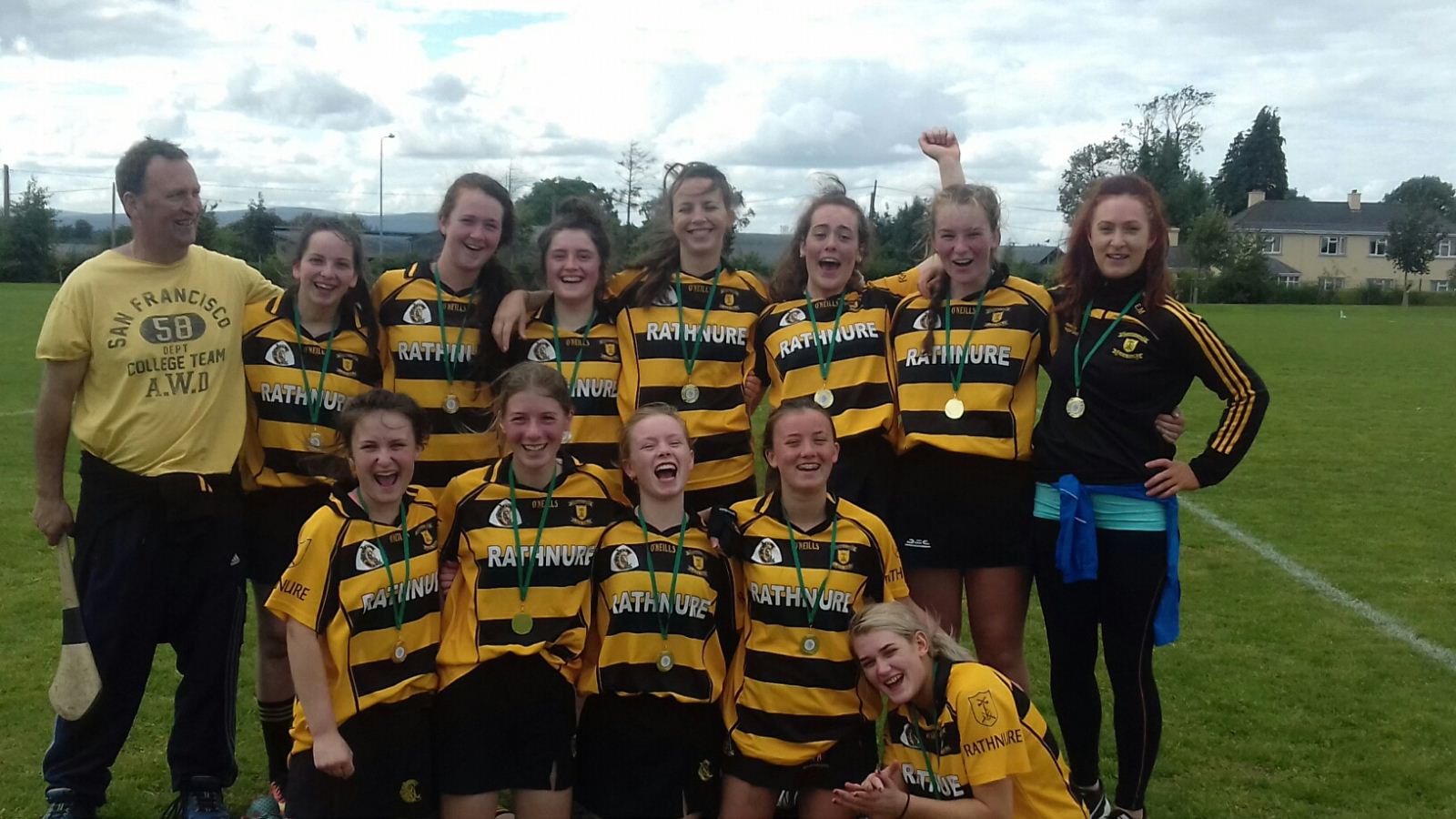 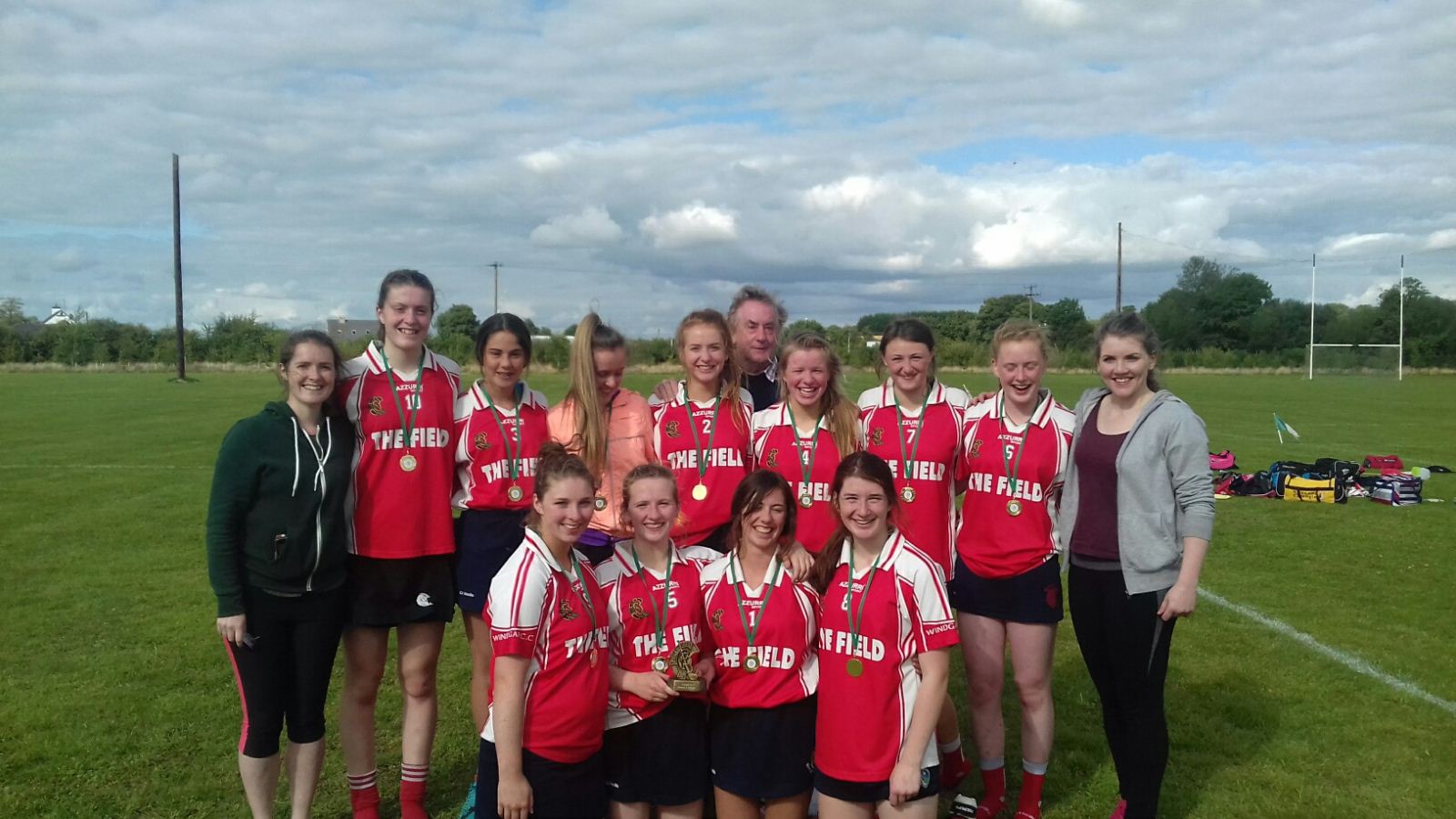 Windgap Kilkenny Division 2 Winners
Roscommon Camogie Camp
Roscommon camogie held a hugely successful camp on August 14th, 15th and 16th. The stand alone Camogie camp was the biggest one to date in Roscommon and it attracted a crowd of over 110 girls from all over the county. It was held in Lisnamult (home of Roscommon Gaels). The camp was organised by Roscommon camogie development officer Marie O Brien and assisted by John Mullins (Camogie Participation & Growth Officer for Connacht).
9 qualified coaches and 9 TY students with coaching experience all helping out to ensure that each girl received expert coaching in many aspects of the game. It was hugely enjoyable for everyone and well done to all involved. 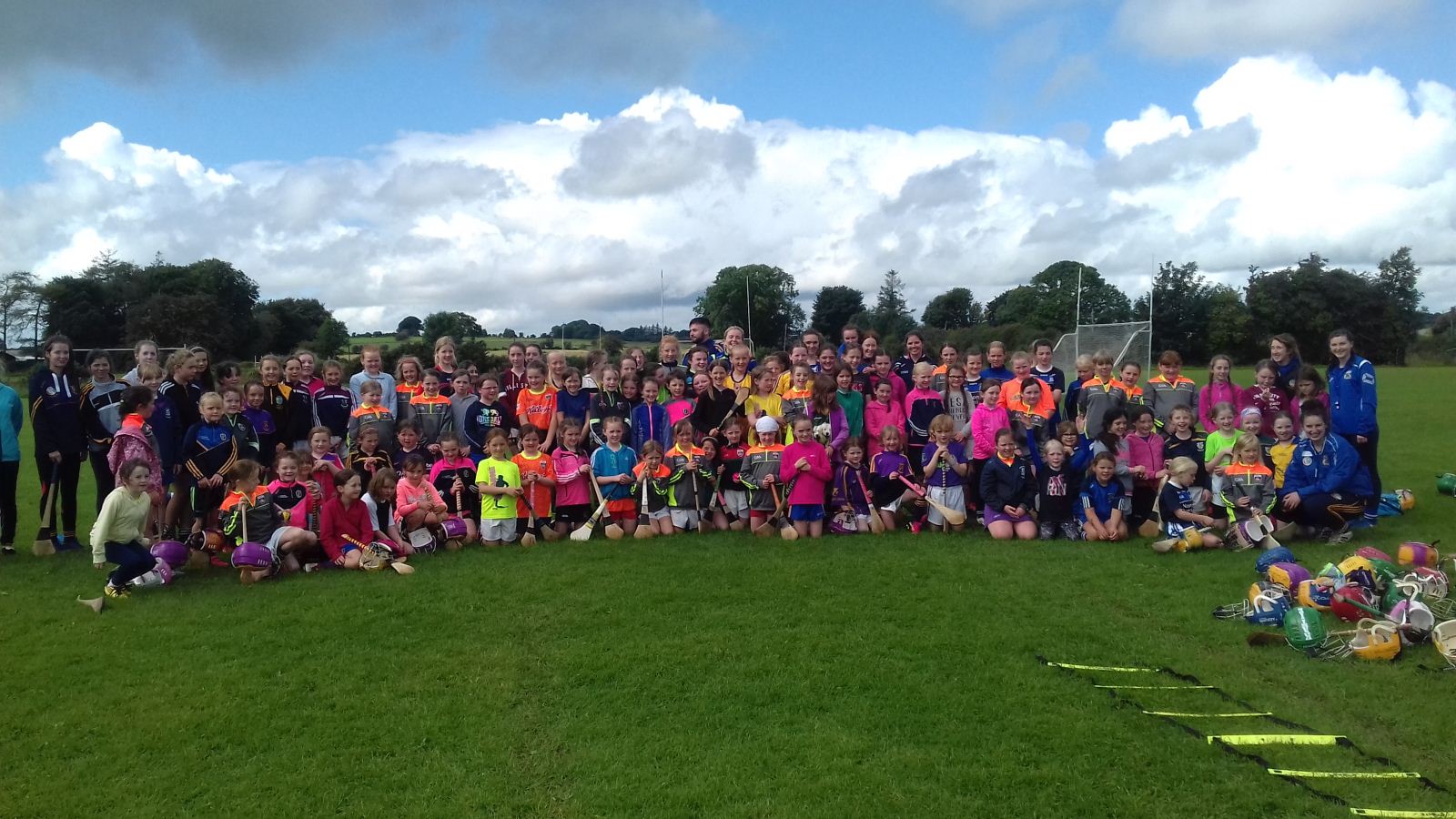 Roscommon Camogie Camp 2017
O’Moore’s Camogie Camp
O’Moores Camogie Club, traditionally dominated with football in North County Laois hosted their very own camogie summer camp last week in the Rock GAA Club. The 3 day camp was an over whelming success with over 60 girls in attendance.
The O’Moores Camogie Senior team themselves have proven that success across both codes is possible with over 20 dual players on their senior panel who secured their first ever senior county title last year, and so they looked to promote camogie also in our younger age groups.
The camp proved a huge success with club membership increasing and reaching its highest level ever as a direct result of the camp.
The 3 days were capped off with a presentation of goody bags, including a limited edition club sliothar, by their very own dual star, Alison McEvoy. There was also a presentation of club t-shirts made to four ‘camp champs’.  Well done to all at O’Moore’s Camogie. 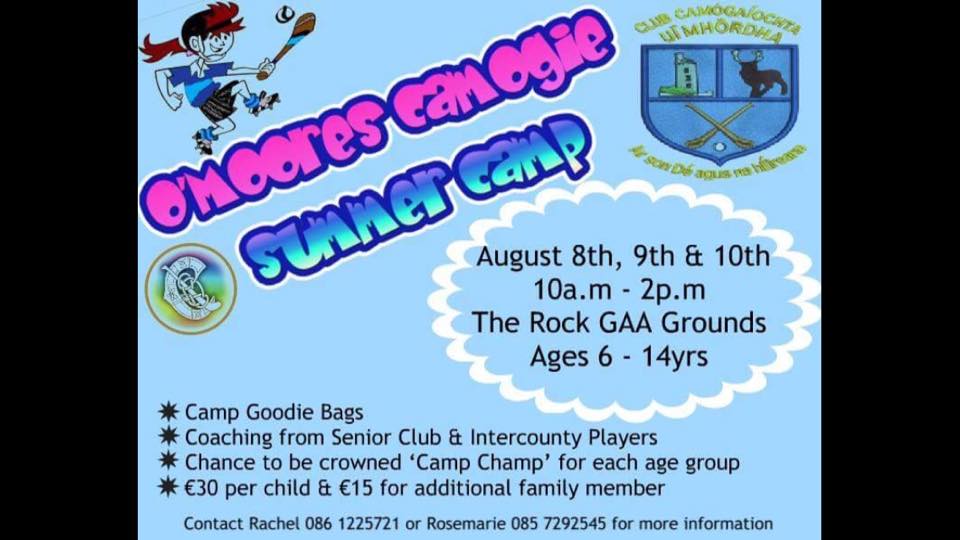 Round Towers, Kildare Receive Start-up Grant
Round Towers club, Kildare Town, commenced camogie in 2016 and it has developed consistently towards becoming a very promising young club. Under the leadership of Paul Condon and Vicki Duffy (among others) and with the full support of Round Towers GAA club led by Chairman, Frank McMahon, the club is working hard at growing from a young base and has participated in Kildare Camogie Go Games blitzes this year; cobwebs were also blown off when Round Towers participated in the Camogie Hurl with Me programme! The Camogie Association recently added some financial support by way of the new club start-up grant to Round Towers to further aid them in their good work. 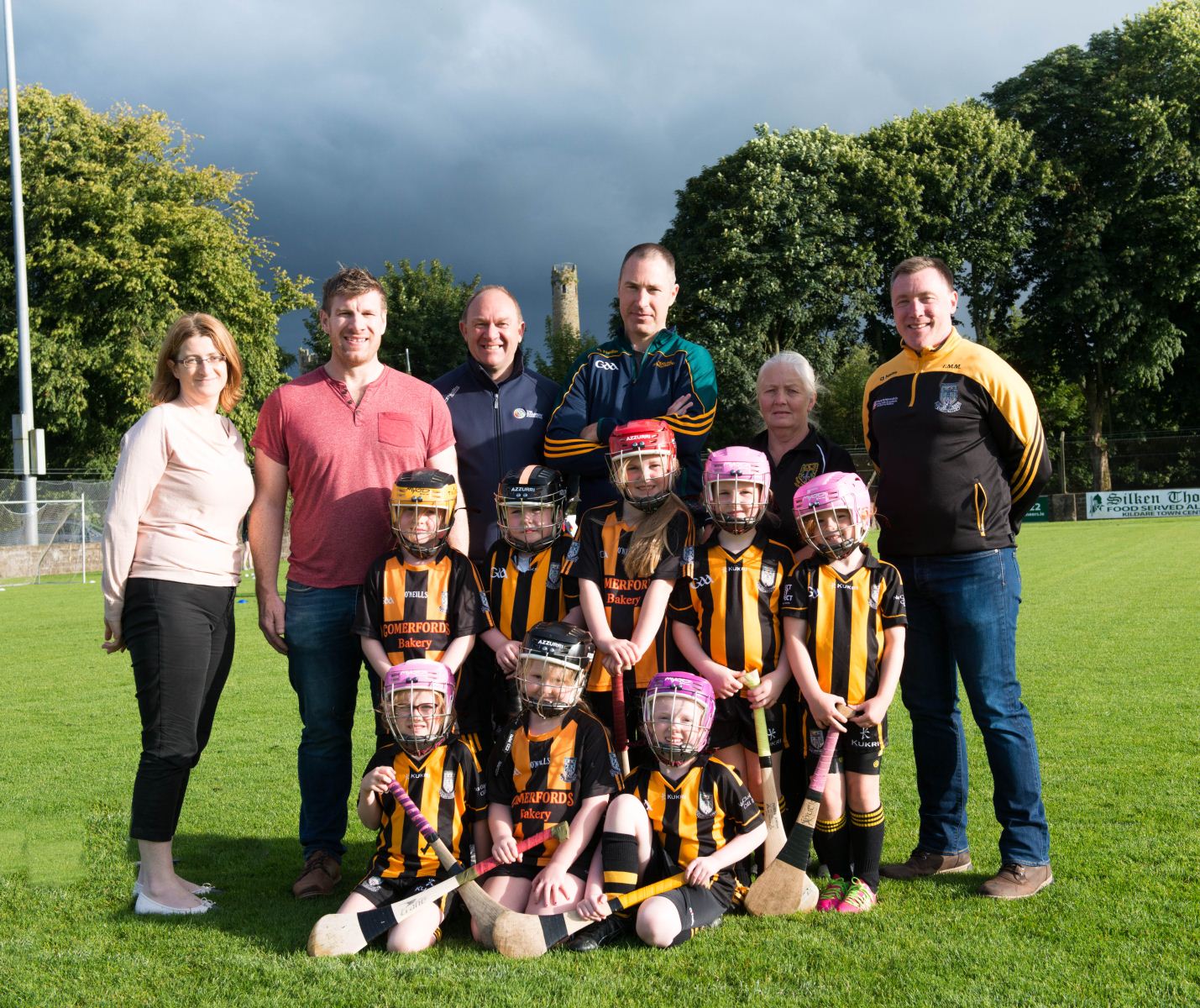 Leinster Ard-Comhairle delegate, Hilda Breslin, with Round Towers Frank McMahon, Chirman, Jerome Twomey, underage mentor, Brendan Kenny, Kildare & Meath Participation & Growth Officer, Paul Condon, Lead mentor, and Bríd Downey, Treasurer.
Kilcullen are Kildare’s Newest Camogie Club
Kildare’s newest camogie club, Kilcullen, are driving on with developing camogie, with training sessions for the u9s and u11s, both of whom will take part in the Autumn County Go Games games and blitzes. Lead mentor Ann Byrne Kennedy and her enthusiastic mentors recently welcomed county vice-captain, Derbhile Byrne, to see a Kilcullen training session. Derbhile spoke to the girls and encouraged them to enjoy and work at the great game of camogie (incidentally, Ann had coached Derbhile at her club, St. Laurence’s when she was at a young age). 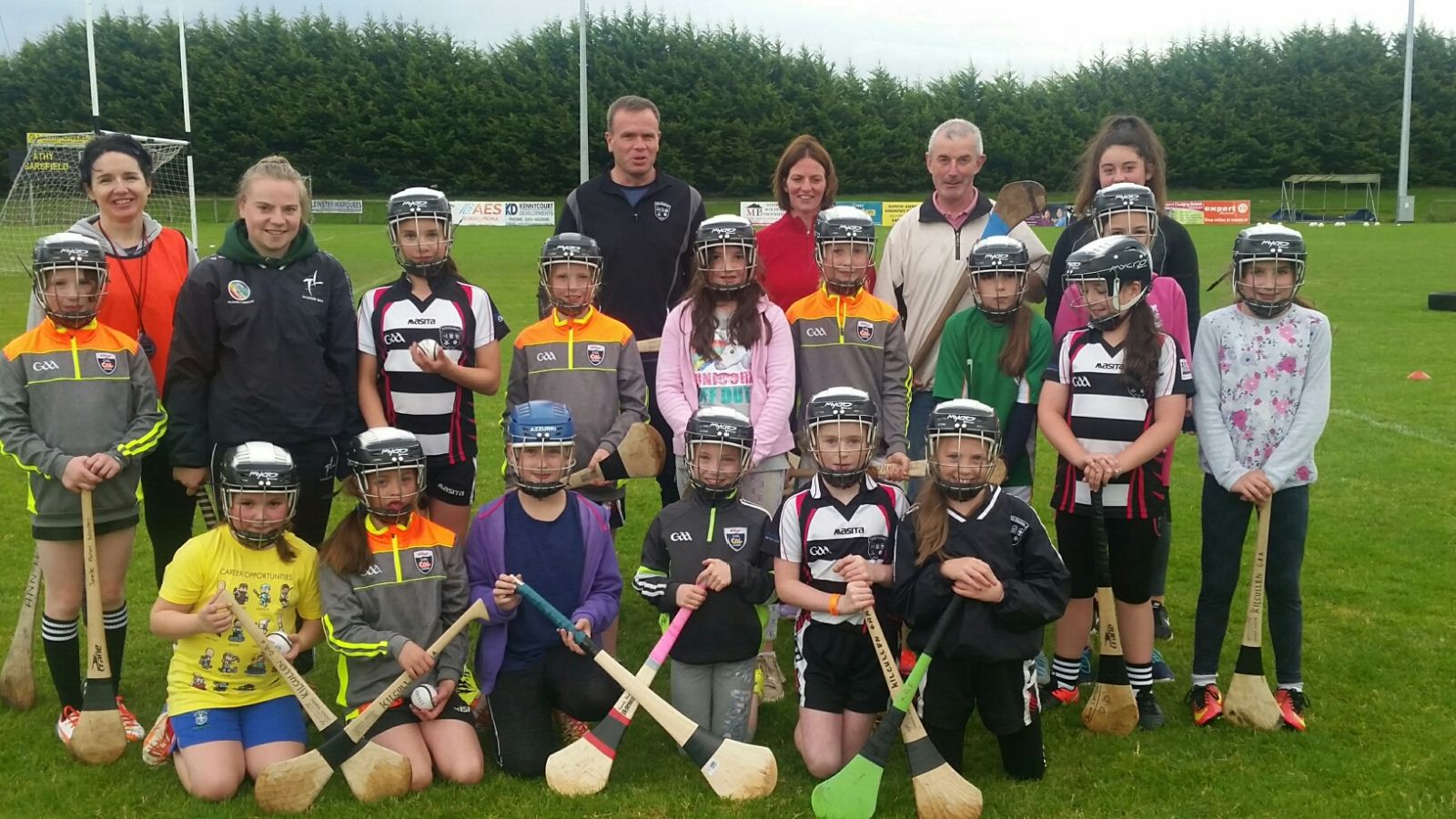 U9 and u11 training at Kilcullen GAA
Coill Dubh Cul Camp
Coill Dubh, who are also a young camogie club, ran an excellent Cul Camp recently with hugely increasing numbers of girls and boys participating. Under the co-ordination of Kildare GAA legend Johnny Doyle and supported by Paul Divilly, the club’s large participation rates are testament to the good work being put in at Coill Dubh. 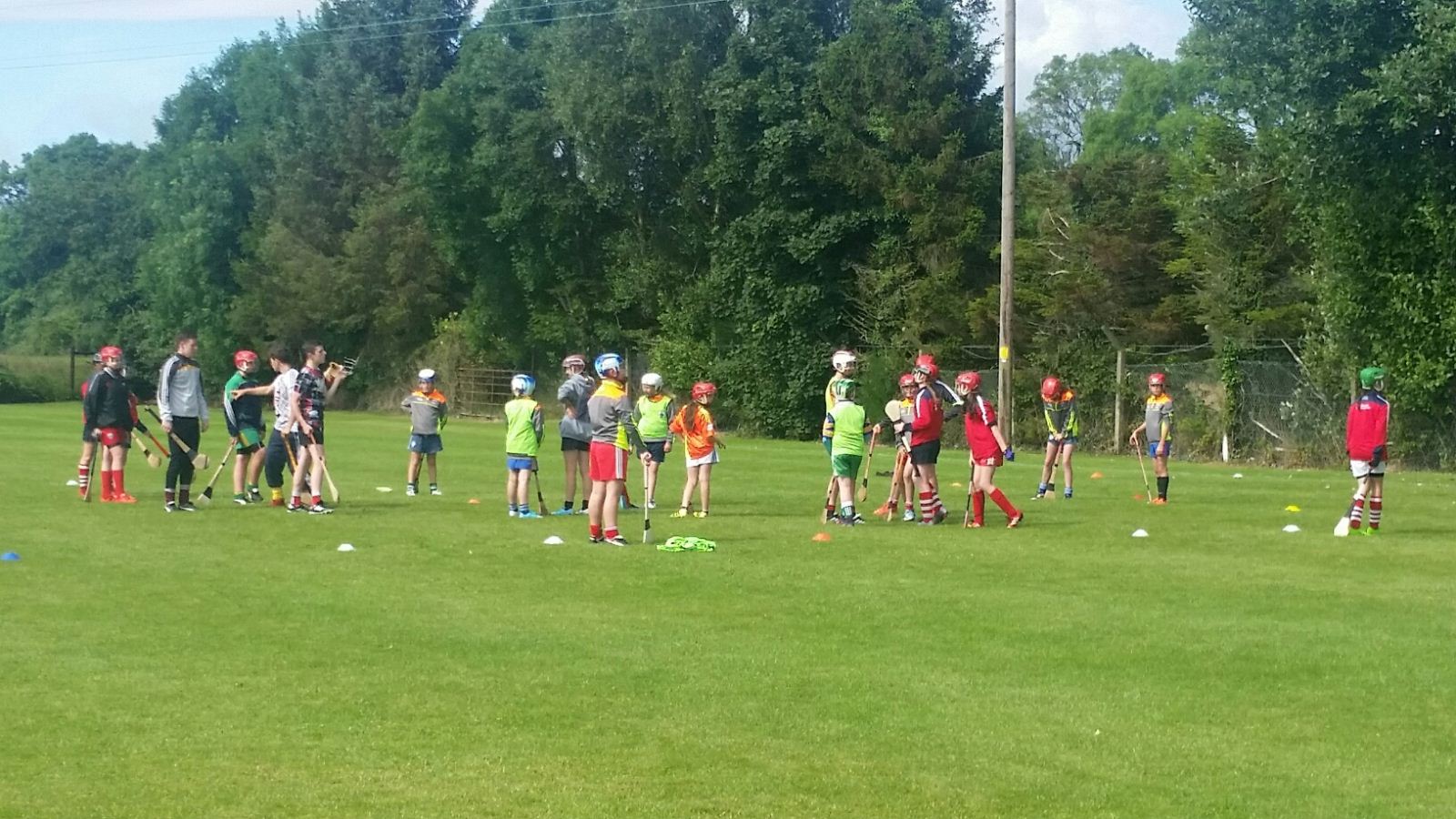 Camogie/Hurling Cul Camp at Coill Dubh club
If your club or county has any exciting camogie development news you would like to share with us email eve.talbot@camogie.ie