Latest
Calling all J1 Students
A new and exciting opportunity for students travelling to the USA this summer on their J1.
The Continental Youth Championship (CYC) takes place this year from July 27th -30th in Buffalo, New York. The CYC is a tournament of Gaelic games which has taken place annually in the USA since 2004. It is the largest GAA event which is held outside of Ireland with up to 2,500 children participating each year.
Camogie is an integral part of the programme of games over the 4-day tournament and has been one of the fastest growing elements of the games over the past number of years.
We are looking for J1 students who would be interested in refereeing at this unique event. All applications will be considered as training will be provided for those who are selected. Students will be flown from their base in the USA to Buffalo for the games.
Register your interest now by clicking here.
Closing date for applications is March 27th. Places are limited so the successful candidates will be notified thereafter.
Other Camogie Development News this week:
·       Galway Foundation Coaching Course
·       Legends Tournament 2017
·       Galway Level 1 Coaching Course
·       Commercials & Fingallians Flying Camogie Flag at New York Parade
·       Caman to Connacht & Caman to Ulster
·       Ulster U8 & U10 Indoor Blitz
·       U16 Schools Development League
Galway Foundation Coaching Course
25 participants completed the Galway Camán Get a Grip Coaching Course held in Athenry over 2 Monday nights (March 13th & 20th). Coaches from 7 clubs were represented on the course. Richard McNicholas and Caroline Murray tutored on the course. 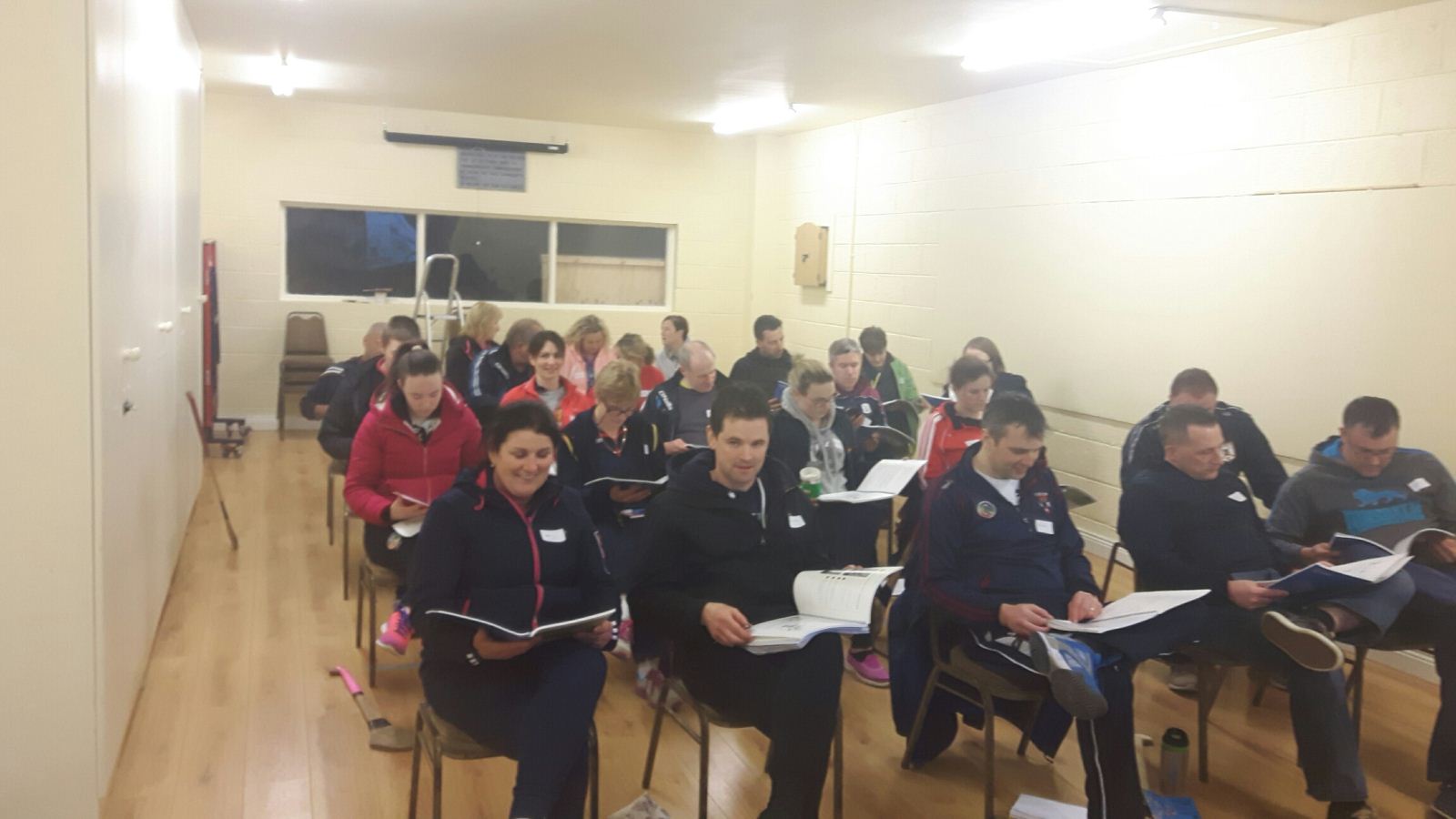 Legends 2017
The Legends Tournament previously cancelled due to poor weather will take place in Na Fianna Dublin on Saturday April 8th. This competition in its 7th year caters for ex county players aged 35 and over and promises excellent camogie each year. There will be a cup and shield competition on the day. 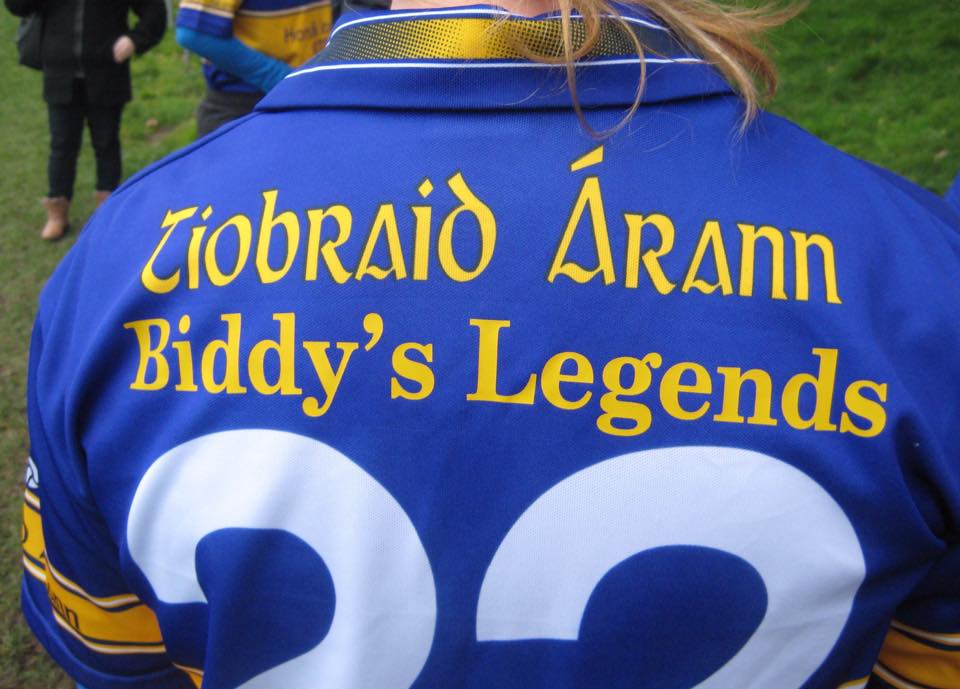 Commercials & Fingallians Flying the Camogie Flag at New York Parade
It was certainly a trip to remember for the girls from 2 Dublin Clubs, Commercials & Fingallians, who travelled to New York last week to walk in the St Patrick’s day parade. Undoubtedly lots of memories made for the girls and mentors who also played games against Liberty Gaels in Gaelic Park.  Well done to all the organisers for creating a big of history for all the girls involved. 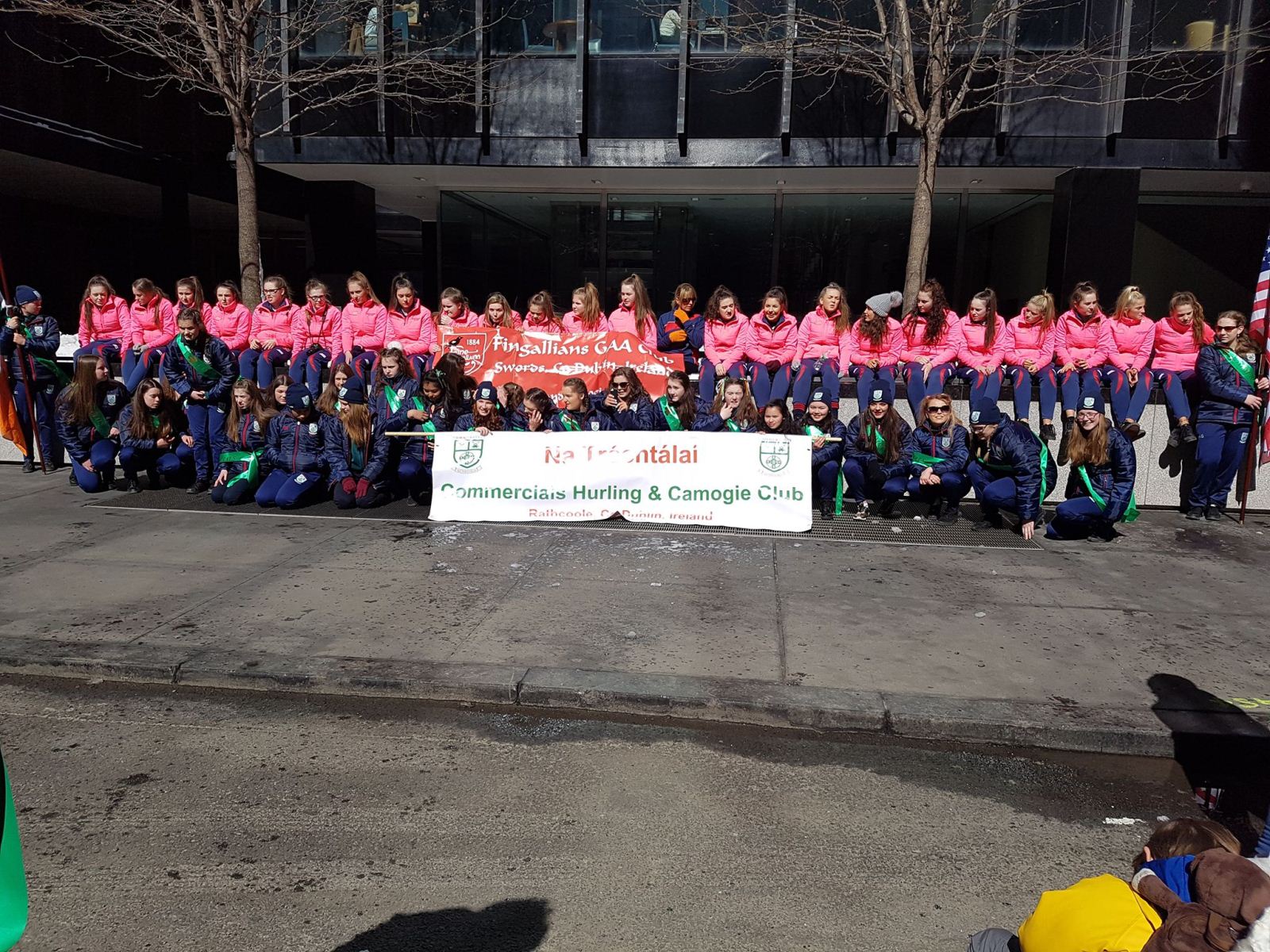 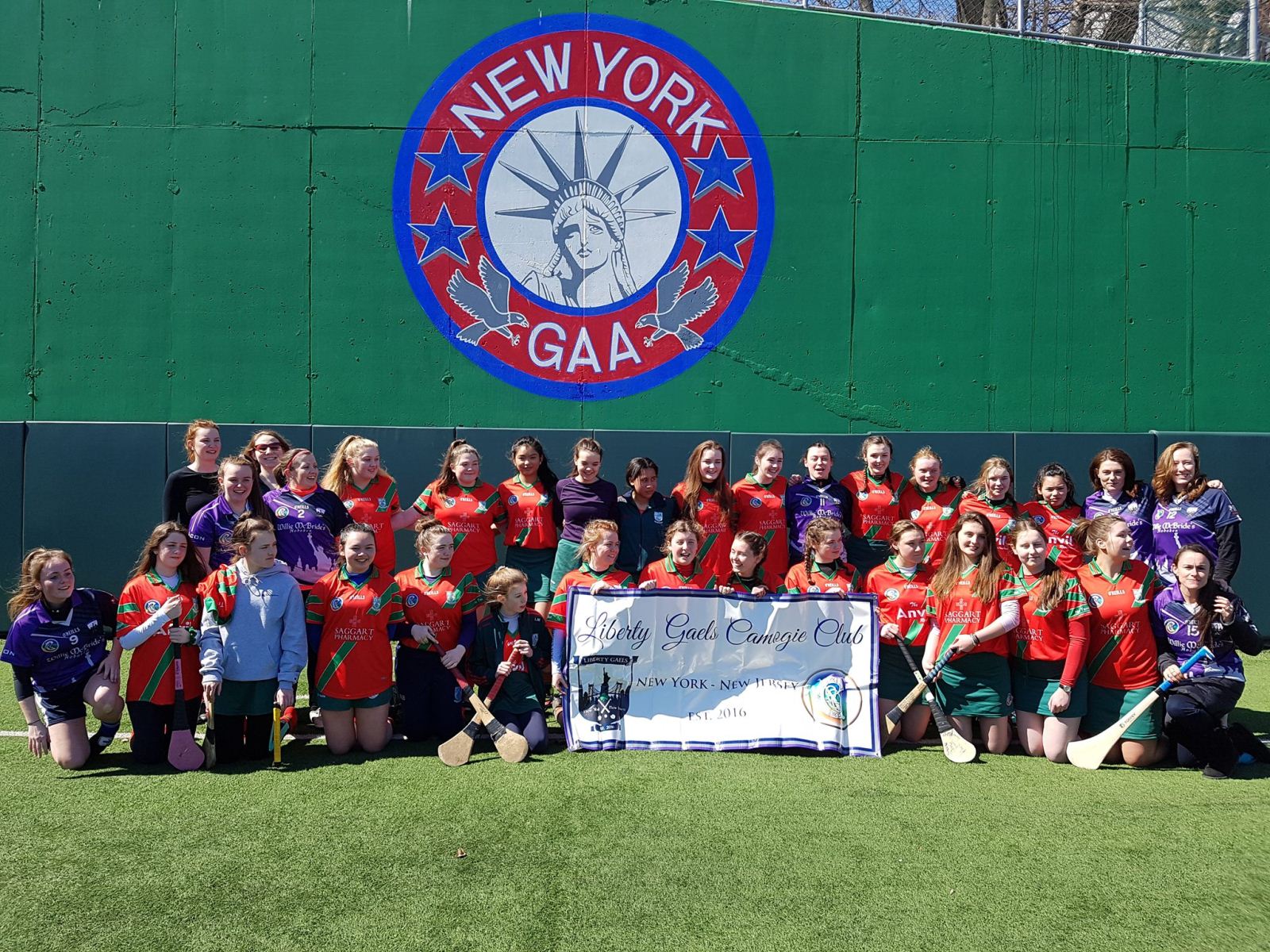 Commercials & Liberty Gaels in Gaelic Park
Camán to Connacht & Caman to Ulster
The Camán to Connacht & Caman to Ulster events will take place this Saturday March 25th.  The Connacht event will be held in Pearse Stadium while the Ulster event is to be held in Gavaghey Centre of Excellence Tyrone.  Over 65 clubs will participate in these events which will see all clubs go into a draw to attend the National Caman to Croker day in April. 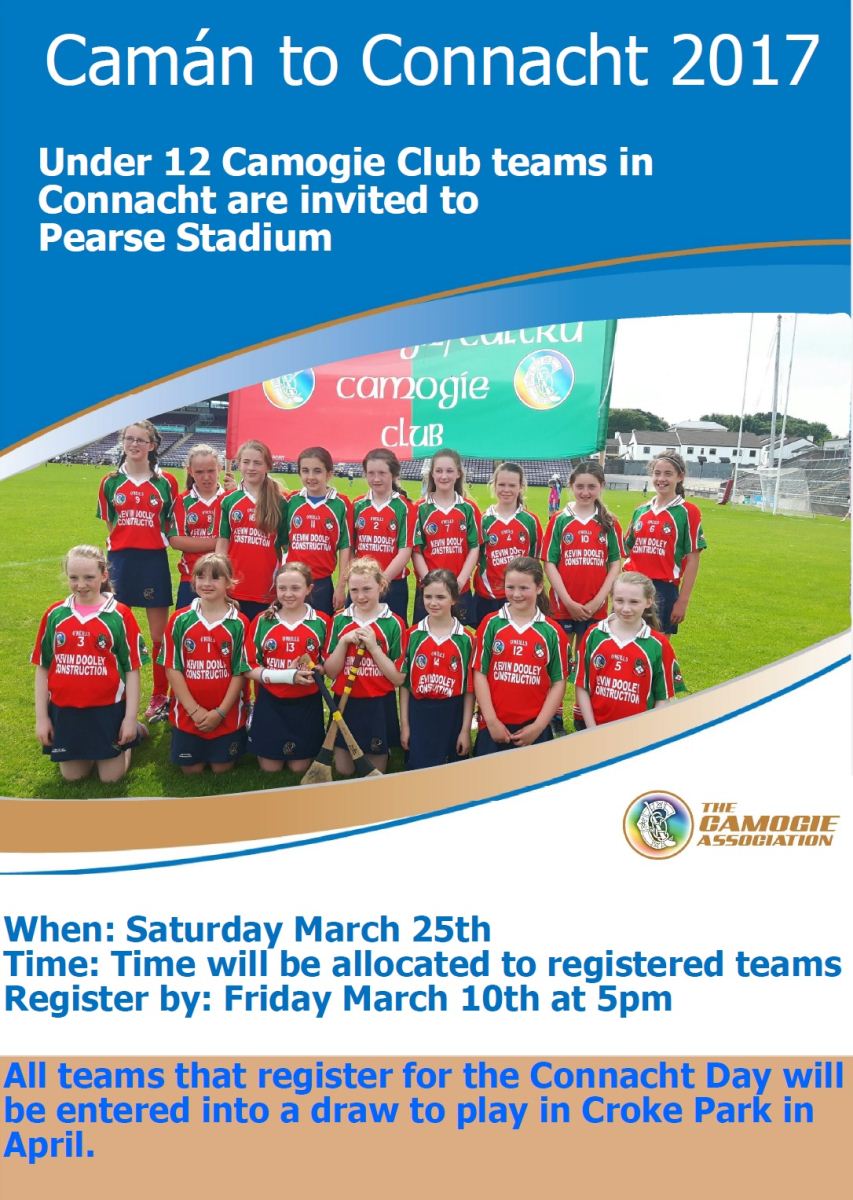 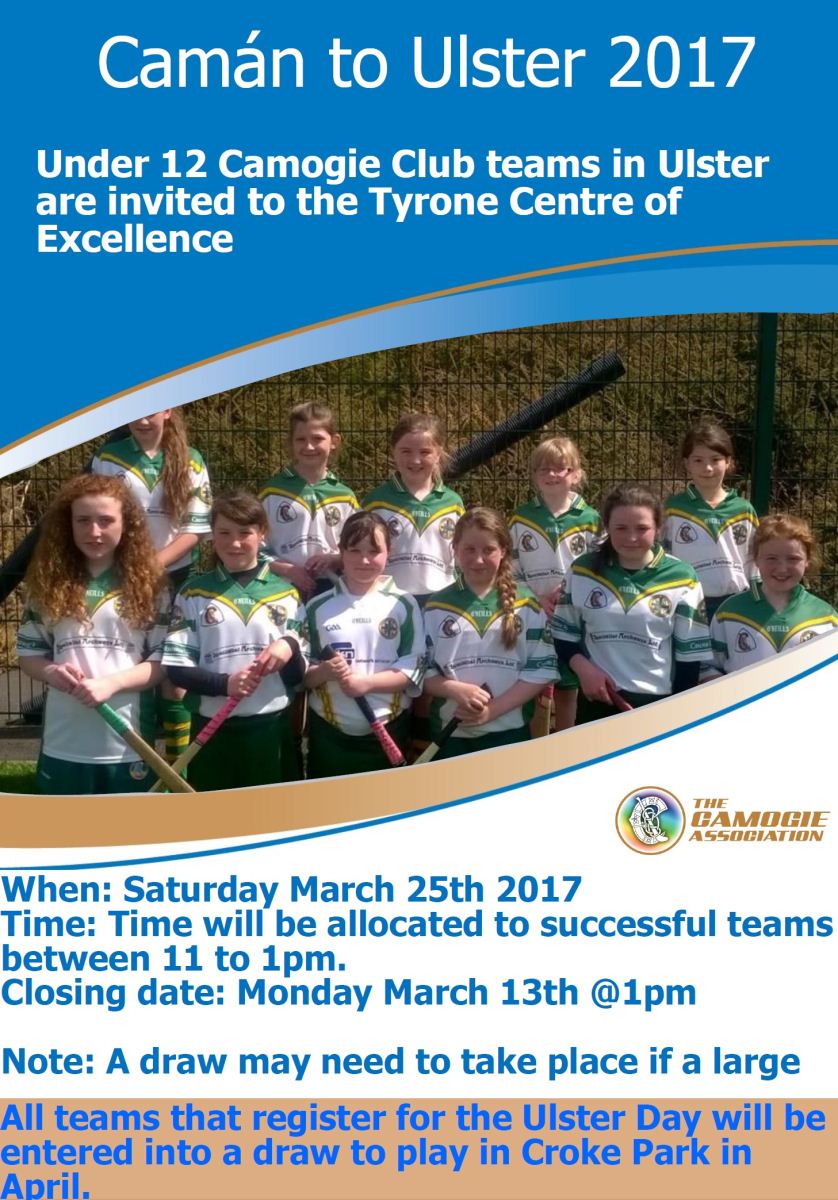 Ulster Indoor U8 & U10 Blitz
Sunday March 19th was a great morning spent in Meadowbank Indoor sports arena at the Ulster U8 & U10 blitz. In total 56 teams took part with over 660 girls playing over the four hours. The skill on show was outstanding and there was a wide spread of club represented.  Thanks to the clubs and coaches for their attendance and support. 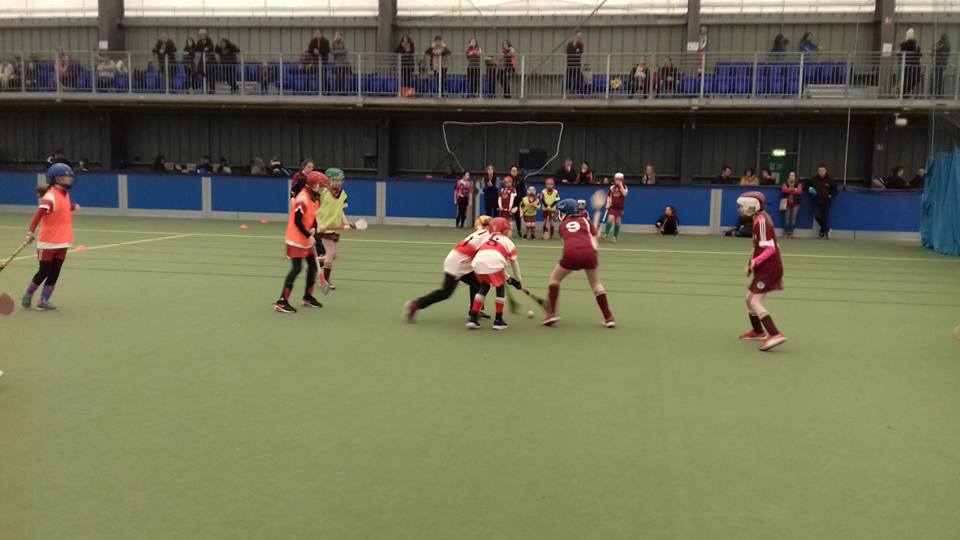 U16 School Development League
Wednesday March 15th was the beginning of a new camogie U16 Development school initiative this is the first year of the programme and there was six school involved, 4 Monaghan, 1 Tyrone and 1 school from Louth. Thanks to Inniskeen club for their facilities.
The aim is to have a competitive development league for the girls and help them move forward to compete in the school competitions for 2017/2018 season.
This is a 15 a side competition with each school playing two blitz days and followed by quarter, semi-finals and finals.
Planned Games Schedule
The Schools participating include: 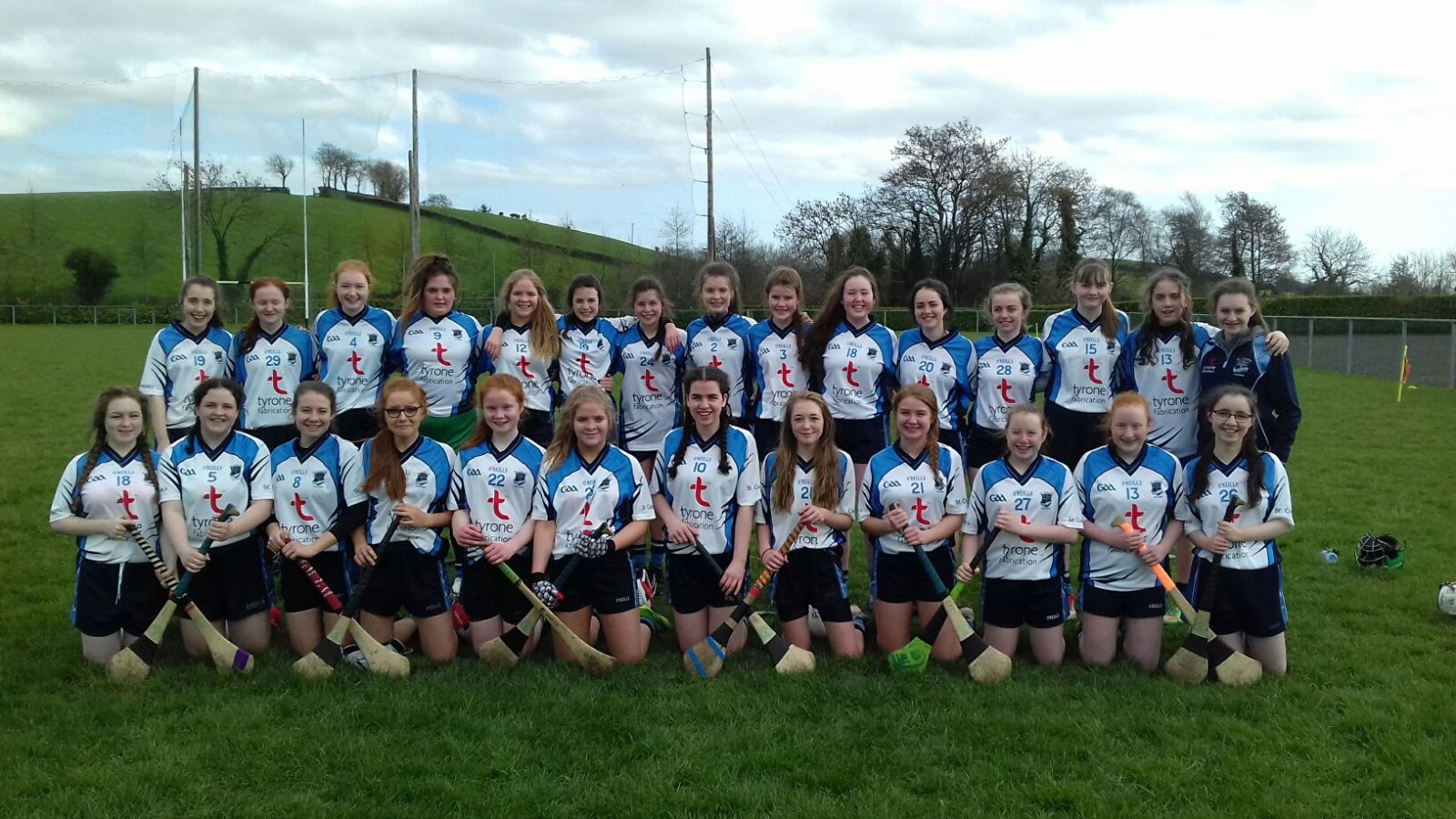 St Ciaran's Ballygawley
If your club or county has any development news they would like to share please email eve.talbot@camogie.ie