Latest
Camán to Ulster Date Announced!
The Camogie Association’s annual Camán to Ulster blitz event has been announced as Saturday March 25th in the GAA Centre of Excellence Tyrone. This event is for U12 club teams and every club that registers for the day will be in the draw to take part in the National Camán to Croker day in April.
Register Here by Monday March 13th.
Camogie Development News this week:
·       Level 2 Coaching Course
·       Poster Competition in Eglish for Club Finals
·       Ulster U12 Indoor Blitz
·       Legends Tournament
·       Commercials to paint ‘The Big Apple’ Red & Green
·       O’Neills Post Primary schools finals this weekend!
Level 2 Coaching Course
The Level 2 Coaching Course continued last Saturday February 25th.  It was the last weekend of the course. The assessments now take place on March 12th for all coaches in Charleville Cork. Well done to all the coaches undertaking this intensive course over the last month. 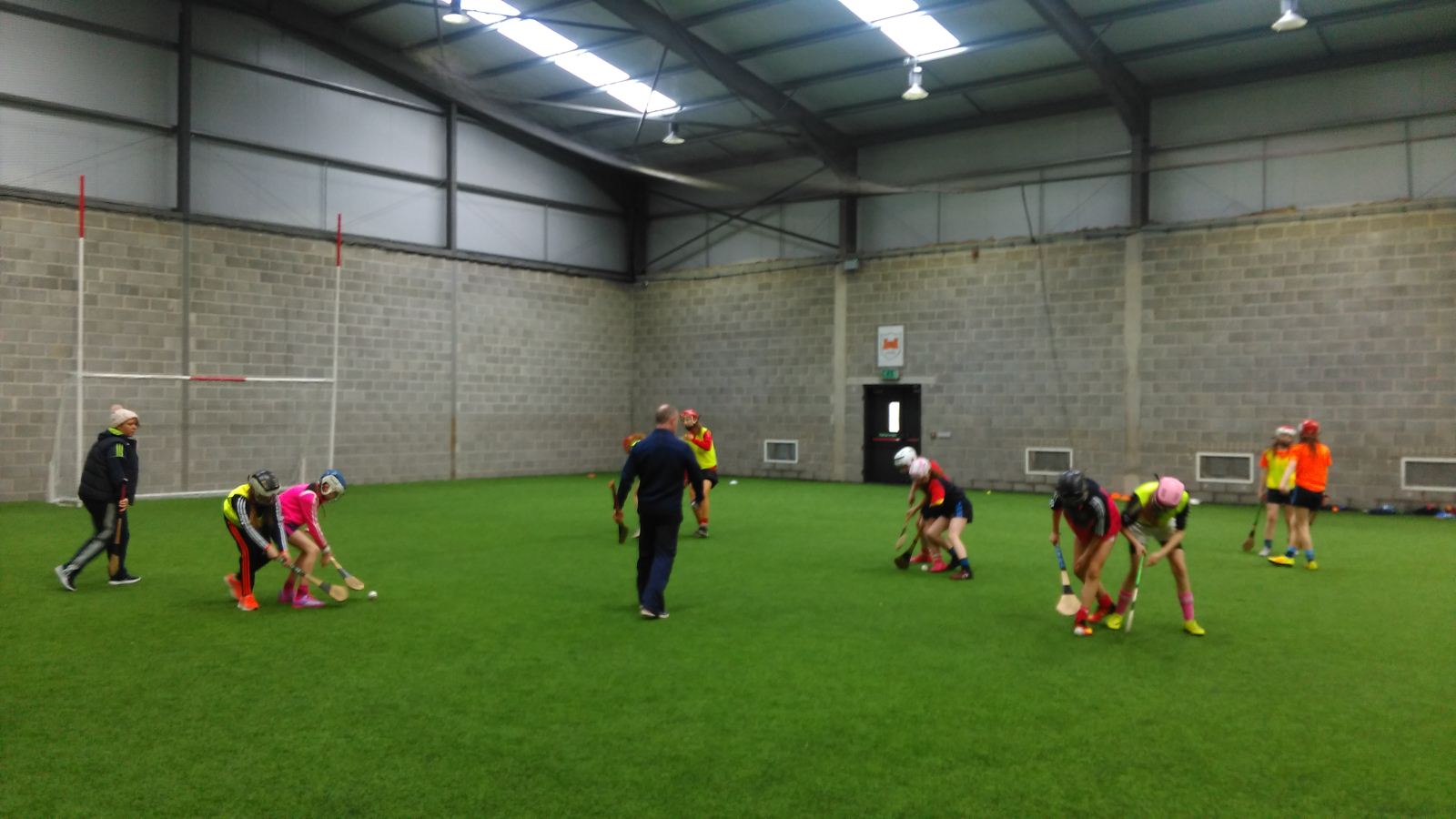 Poster Competition in Eglish to Celebrate the Club Finals
Friday February 24th was a great morning spent in Roan Primary school and Derrylatinee primary school. Eglish players Leona Gallagher and Kelley Fay showed all the kids the Ulster cup along with judging the poster competition.  Once again the talent on display was exceptional. Congratulations to all the winners. Thanks to the both staff and pupils of the local schools for taken part and huge thanks to Leona and Kelley for giving up their time and helping to create such a buzz. Best of luck to Eglish Camogie Team in the All Ireland Club final Sunday March 5th in Croke Park. Let get out and support them. #thetoughest 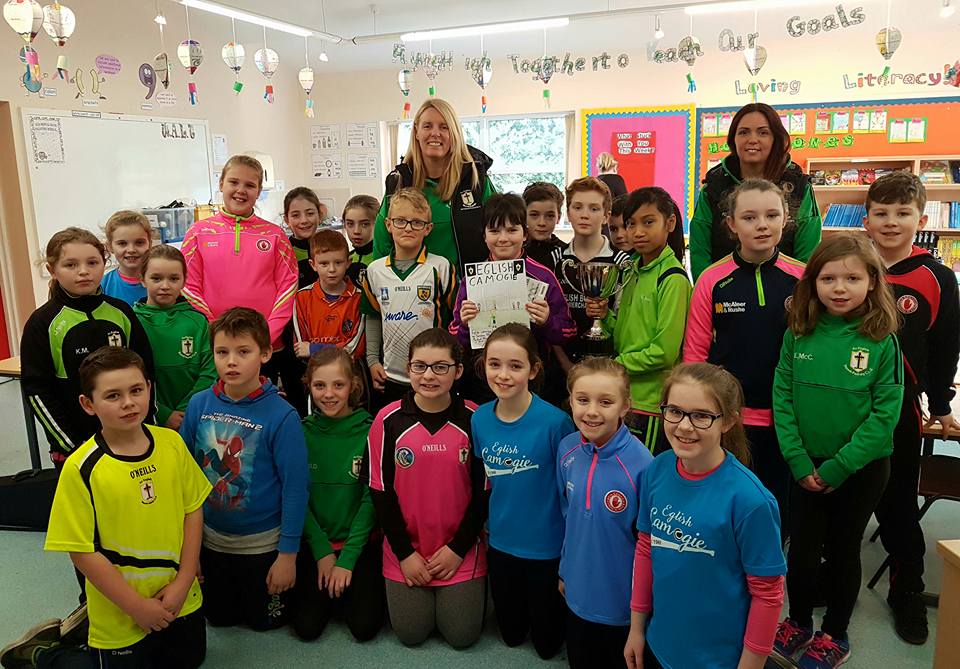 Ulster Indoor U12 Blitz Meadowbank
Sunday February 26th was a big day in the calendar in Meadowbank Indoor sports arena which hosted the Ulster u12 blitz. In total 33 teams took part with over 350 girls playing over the four hours. The skill on show was outstanding and there was a wide spread of club represented.  Thanks to the clubs and coaches for their attendance and support. 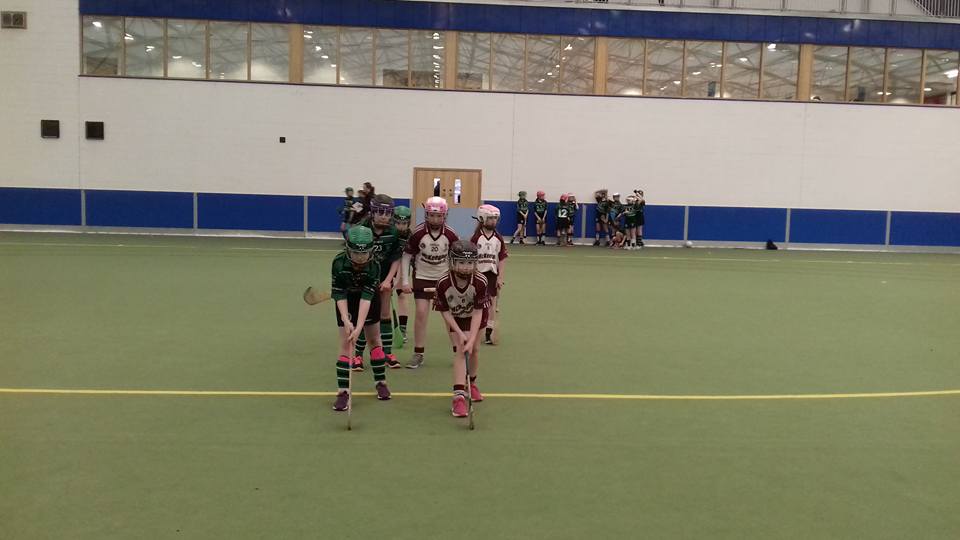 Legends Tournament
The annual Legends Tournament will take place this weekend in Na Fianna GAA Club in Dublin. This is the 7th year of the competition which is for past players who have retired from Intercounty Camogie.  It is popular not only for the games but also for the social occasion it provides where old acquaintances are renewed. For more information on the Legends event this weekend check out the link below.
Legends Tournament
Commercials to Paint ‘Big Apple’ Red & Green
They say it is the city that never sleeps so 50 girls from Commercials Hurling and Camogie Club in Dublin will be putting that theory to the test as they head off on a trip to New York for St Patrick’s Day. The highlight of the trip will be marching down 5th Avenue in the St Patrick’s Day Parade in the club’s famous Red and Green colours. The girls will play a camogie match in Gaelic Park against Liberty Gaels from Hoboken in New Jersey on Sunday March 19th. 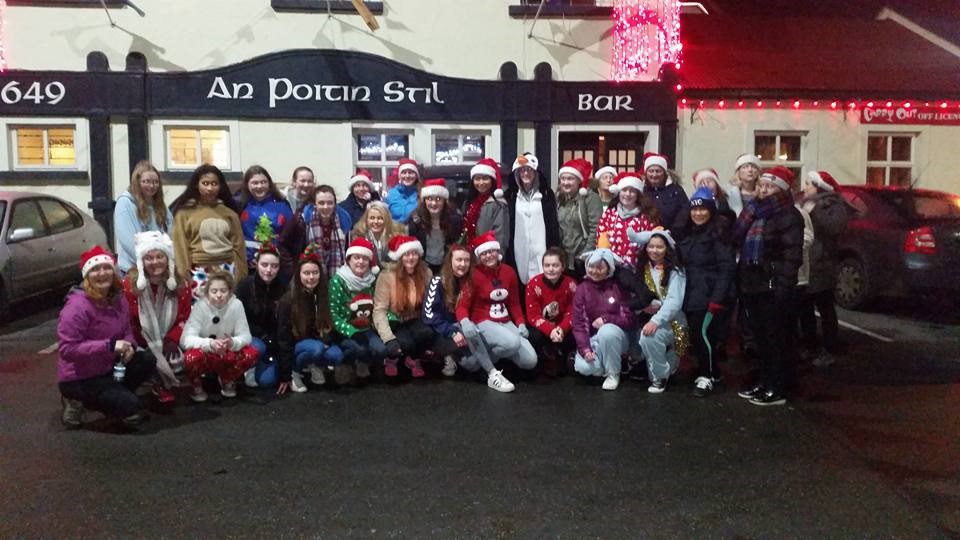 Their very own Jonathan Kennedy from Rathcoole has kindly sponsored the team and he will host the girls in his hostelry ‘The Long Hall’ for some ‘ceol agus craic’ and a bite to eat. It will be a fantastic experience for everyone travelling and the excitement is building day by day.  And Who knows Donald Trump might turn up for a puck around!! Camogie has gone from strength to strength in Commercials since it was re-established 6 years ago. They now have over 190 girls playing camogie at all age levels in the club. There is no doubt they have set a tradition for all teams to look forward to in the years to come. Na Tráchtálaí abú!
O Neill’s Post Primary Schools Finals This Weekend!
Good Luck to all the secondary schools around the country taking part in their respective All Ireland Finals this Saturday March 4th. Thanks to all our officials and the Post Primary Provincial and National Committees along with servicing officer Bronagh Gaughan for all their hard work.
Senior A Final
Ursuline, Thurles Tipp v Loreto Kilkenny
Venue: St Brendan’s Park, Birr
Time: 3pm
Ref: Jenny Byrne
Senior B Final
Colaiste Iosagáin Dublin v St Joseph’s Rochfortbridge Westmeath
Venue: Donaghmore/Ashbourne GAA
Time: 2pm
Ref:  Alan Doheny
Senior C Final
Castleknock Community College, Dublin v St Patricks, Keady Armagh
Venue: Inniskeen Grattans
Time: 1pm
Ref: Alan Lagrue
Senior D Final
John the Baptist Community School Limerick v Scoil Mhuire, Trim Meath
Venue: St Brendan’s Park, Birr
Time: 1pm
Ref: Gavin Donegan
If you have any exciting camogie development news you would like to share you can email eve.talbot@camogie.ie