On Saturday the All Ireland U 15 Camogie Division 1 Blitz took place in Naomh Peregrine Dublin with 5 teams Dublin, Cork, Galway, Kilkenny and Tipperary competing in this division. All teams played each other in a round robin series on what turned out to be a very wet and windy morning in the capital. The group stages were highly competitive with some very entertaining games along the way. At the end of the round robin the girls from Kilkenny were on the summit of the table and progressed straight to the Cup Final.

A semi-final then took place between Dublin and Galway in what was possibly the game of the day with huge amounts of skill and desire on display. After an epic battle Dublin progressed to the Cup Final by the narrowest of margins while Galway progressed to the shield final where Cork awaited.  Both finals were played in a very competitive and sporting manner with Kilkenny the victors in the Cup Final while Cork were the winners in the Shield Final. Pictured receiving Cup and Shield for their respective Counties are Kilkenny captain Patsy Kenny and Cork Captain Meadhbh Ring 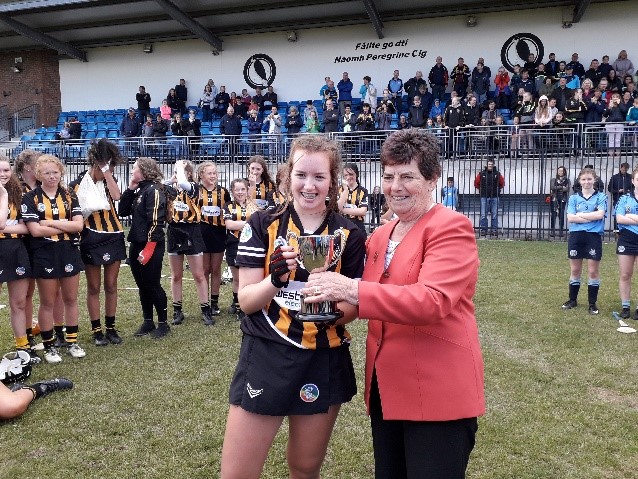 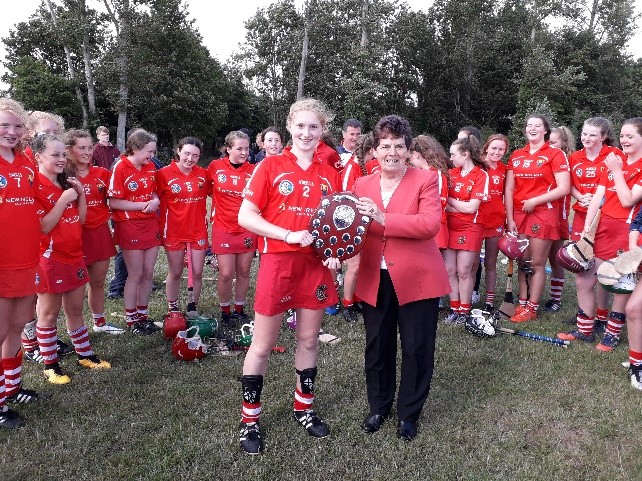 On Saturday the All Ireland U 15 Camogie Division 2 Blitz took place at the GAA Development Centre in Abbotstown. Cork, Kilkenny, Antrim, Clare Wexford and Tipperary completed the line-up for Division 2. Following the completion of the group games Clare and Antrim topped their groups followed by Kilkenny and Cork to complete the semi-final line up. The Shield Final will be contested by Wexford and Limerick.

The Shield final delivered a very exciting match with Limerick proving too strong for the Wexford Girls.

Following the shield final next up were the semi-finals where Clare and Antrim continued their form to win their semi-finals to set up the Division 2 Final.

In what turned out to be a trilling final Clare emerged winners against a gauntlet Antrim team following extra time.

Donegal, Carlow, Armagh, Wicklow Meath and Kildare contested Division 3 of the 2018 U15 All Ireland.

After an action packed group stages Armagh and Carlow emerged from Group 1 followed by Meath and Kildare from Group B with Wicklow missing out on score difference where they would qualify for the Division 4 final v Donegal.

The Division 4 Final was a very entertaining with the girls from Wicklow pushing on in the second half to emerge winners over Donegal.

The sunshine came out for the Division 3 Semi-finals and Carlow and Meath proving two strong for Kildare and Armagh .

Following a day of Camogie and over 40 matches across 4 Divisions Carlow and Meath contested the Division 3 Final where Carlow emerged winners.