Camán to Croker proves a massive Success
Over 1,000 children from all over the country descended on Croke Park for the annual Camán to Croker blitz on Sunday April 8th. This was the 7th year of the fantastic initiative, with 64 clubs from all four provinces represented on the day.
The event provides the players with an opportunity to experience the skills and fun of the game and leaves them with fantastic memories of playing in Croke Park, a place where all young players aspire to play. Congratulations to every club and player that took to the field and congratulations to the staff who helped the event run so smooth.
Tara Camogie 7s
Tara Camogie club London hosted their annual 7s tournament on Saturday 7th April in Greenford. Due to recent heavy rain the junior competition was postponed to a later date meaning only the Senior competition took place on Saturday. The teams involved were Cappataggle from Galway, Ballybrown and Patrickswell both from Limerick, a European combination team, Croydon and Tara both from London. There was some fantastic hard-fought camogie on the day. Cappataggle beat Patrickswell in the final to win the Senior Cup sponsored by Getjar and Europe beat Croydon after extra time to win The Senior Shield sponsored by The Parish Bar Wembley. Michelle Skehill of Cappataggle won Senior Player of the Tournament.

Cappataggle
In Memory and Appreciation of Etty, Maria Mooney of Madrid Harps/Eoghan Rua Derry became the first recipient of the Annual Shield which will be awarded at our Camogie 7s. On behalf of Tara Camogie Club London we would like to thank Tir Chonaill Gaels for use of the grounds, all our sponsors, everyone who helped out on the day and all the teams who travelled from Ireland and Europe to take part. 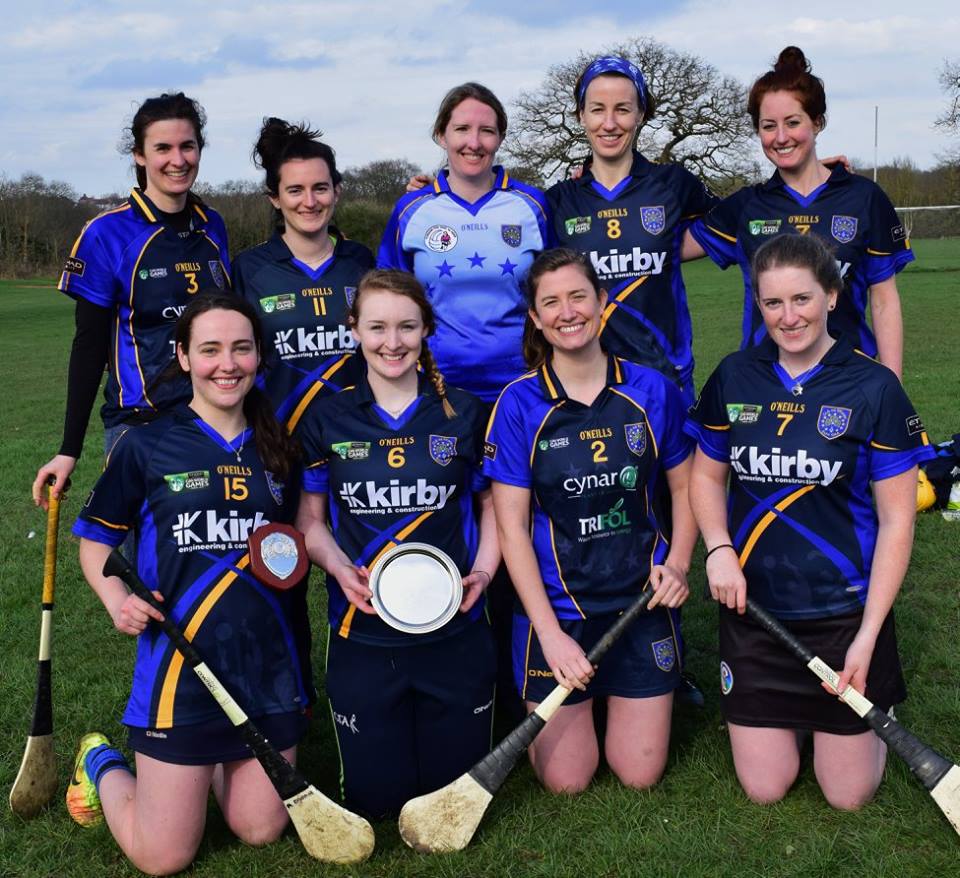 Europe
Annie Moores NY – New Camogie Club in the Bronx
Saturday 10th March saw Annie Moore’s have not only their first training session of the year – but their first training session ever. The new club was formed a few weeks ago, and with a lot of ladies only taking up the sport for the first time, Aisling Daly decided to take everyone through their paces. Well done to everyone who has just started, looking forward to seeing Camogie in New York grow. A special word of thanks to Martin Hurls from County Antrim who supplied many of the girls with their first hurl too.
For more development news from New York please follow this link to the New York GAA Development Newsletter March 2018
Photo Attached 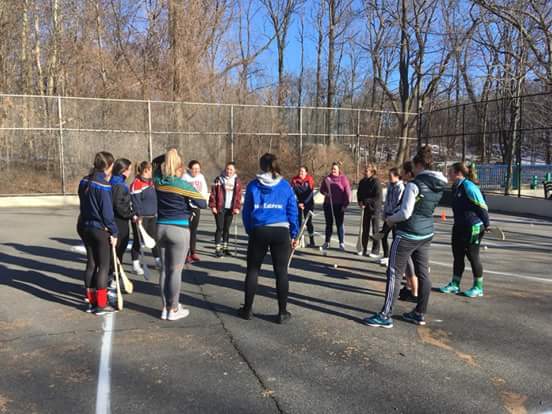 Annie Moore's New Club
Rockland Parents Workshop
Rockland GAA had the pleasure of having New York GAA Hurling Development Officer Micky Quigg come to them on March 9th to facilitate a workshop for new parents. This workshop was an introduction to the main Hurling/Camogie skills to encourage parents and volunteers to get involved in coaching with Rockland GAA or simply to be better prepared in the skills of the game. It was great to see some of our experienced coaches helping out and assisting. 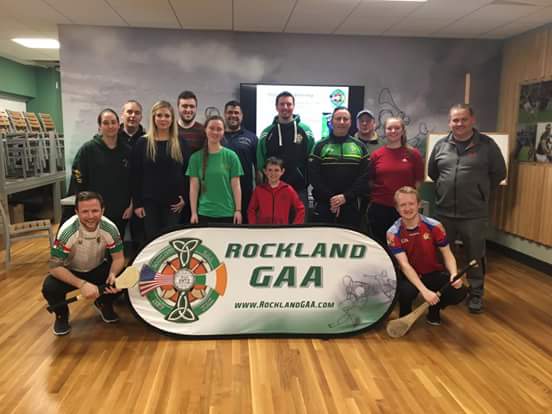 Huge thanks to Micky and for everyone for coming. Thanks to the success of this workshop we plan on running another one in April. For more development news from Rockland GAA, please follow this link to the Rockland GAA Development Newsletter March 2018
Meath and Kildare raising coaching education levels
Meath and Kildare both held Foundation level coaching courses over the recent weekends. 40 coaches from 17 different clubs completed the courses that were superbly led out by tutors Ted Walsh and Ger Gribben at Navan O’Mahonys GAA club and Clane GAA club.

Group who completed the Foundation Course at Navan O’Mahonys GAA, Meath
On last Monday evening, expert tutor Peter Casey led the player retention workshop “Communication and Building Rapport with players” at Moorefield GAA, Newbridge. The workshop was attended by a group of enthusiastic coaches and was very interactive in its content, with Peter drawing on many different experiences of his own as a coach to reinforce the main core themes of the workshop.

Some of the coaches in action at the Foundation Course at Clane GAA, Kildare
Meath and Kildare now continue their ‘Coaching the coaches’ programme with the Spring Coaching Series organised by Camogie Coach Education and Development Co-ordinator, Niall Williams, which commences in Trim, Co. Meath on Monday 23rd April with the “Camán and Play” workshop for coaches of 15-17 year-old players. The series will continue throughout May and June with further workshops aimed at the coaches of the younger players in both counties. For further information on coach education in Meath/Kildare, please contact brendan.kenny@camogie.ie 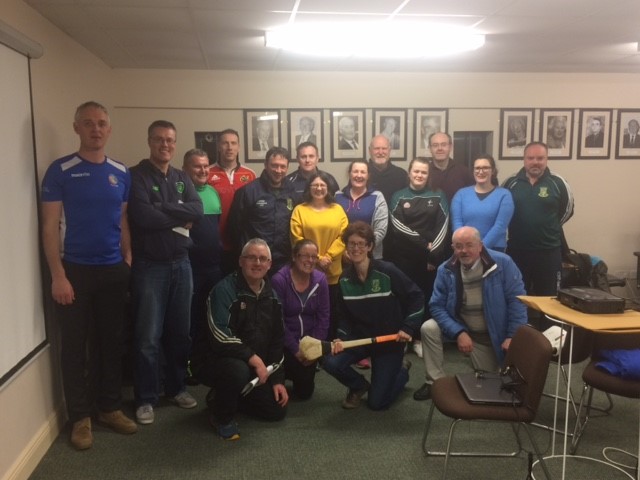 Coaches who attended the workshop led by Clare Games Promotion Officer, Peter Casey – “Communication and Building Rapport” at Moorefield GAA, Kildare
Foundation Coaching held in Laois
Saturday 7th April brought 20 coaches from 3 clubs in Laois to complete the Foundation Coaching Course. With an earlier course previously ran in February, this course looked to include the area of Laois for Camross, Naomh Eamann and St.Lazarians. It is encouraging to see Laois deliver these courses in a strategic way, aiming to provide for the clubs in clusters. They will wrap up their coaching course calendar this coming weekend with a third and final Foundation course in Ballacolla, Co.Laois. 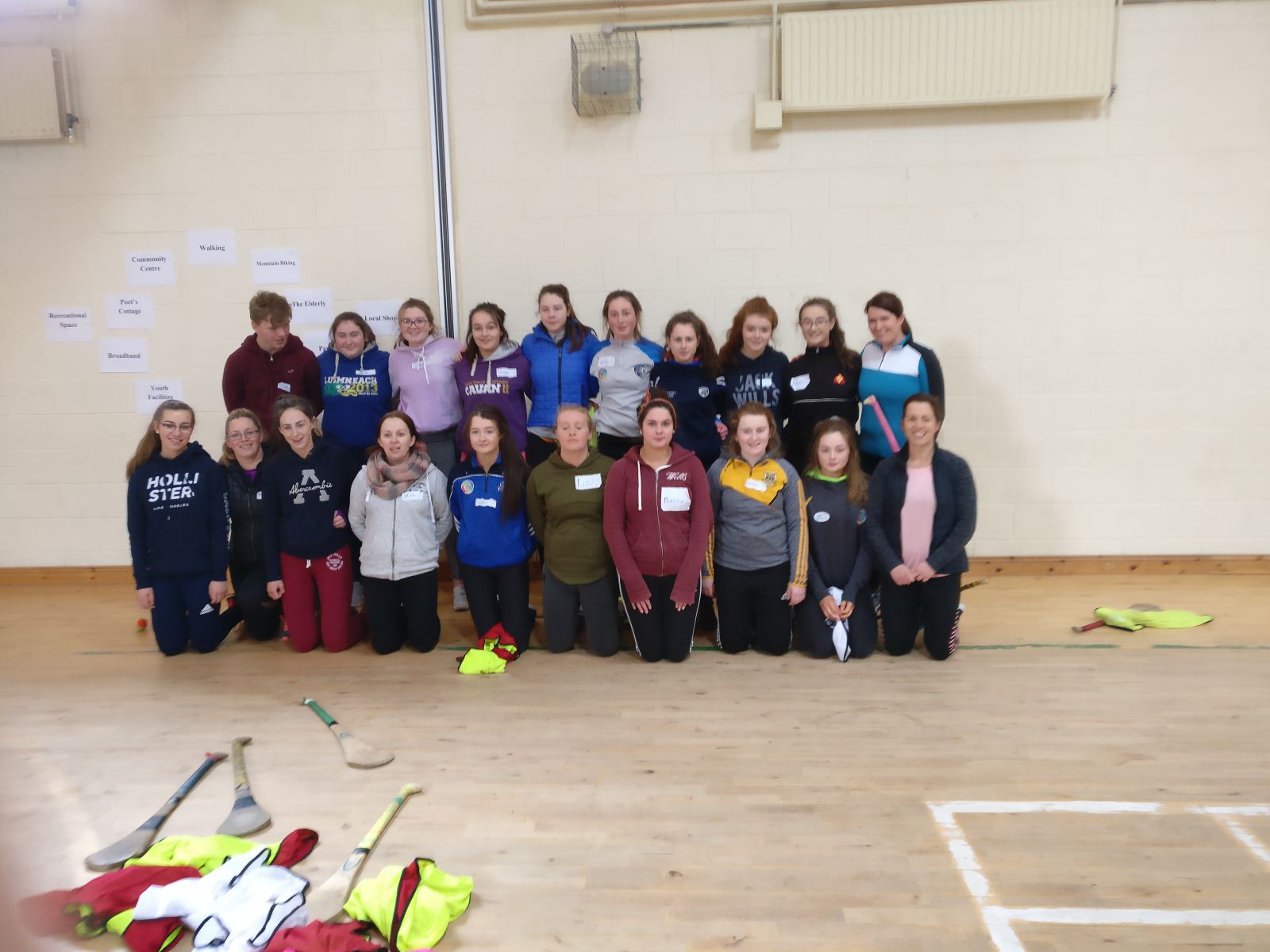 Many thanks to Camross Community Hall for the use of the facilities and to the tutors and coaches who attended. It is also great to see so many younger coaches taking to the courses and looking to get involved in their club’s development.