Latest
Camogie Association team up with Bodywhys, Samaritans and Eating Disorders NI
In conjunction with the Camogie Health and Wellbeing Month we have teamed up with a number of fantastic partners to run information sessions on positive mental health and body image.
The following workshops are coming up:
Visit www.camogie.ie for more information.
U17 Inter Provincial Blitz.
The first ever interprovincial blitz took place on Saturday 8th of September in St Clare’s Sports Grounds, DCU. All Four Provinces took part in the under 17 inter provincial blitz.  Each game was 30 minutes, 15 minutes per half. The blitz was played as a Round Robbin bases. The top two provinces qualified for the final.
Munster played Leinster in the final, with Munster claiming the title
The results of the interprovincial blitz were as follows:
Round 1:         Ulster 1-4, Connacht 6-4
Leinster 0-5, Munster 4-5
Round 2:         Connacht 0-3, Munster 0-11
Leinster 3-5, Ulster 0-2
Round 3:          Leinster 1-9, Connacht 0-3
Munster 6-8, Ulster 0-4
Final:                Leinster 1-3, Munster 1-7.
U15 All-Ireland Blitz
On Saturday 28th of July the All-Ireland U 15 Camogie Division 1 Blitz took place in Naomh Peregrine Dublin with 5 teams Dublin, Cork, Galway, Kilkenny and Tipperary competing in this division. All teams played each other in a round robin series on what turned out to be a very wet and windy morning in the capital. The group stages were highly competitive with some very entertaining games along the way. At the end of the round robin the girls from Kilkenny were on the summit of the table and progressed straight to the Cup Final.
A semi-final then took place between Dublin and Galway in what was possibly the game of the day with huge amounts of skill and desire on display. After an epic battle Dublin progressed to the Cup Final by the narrowest of margins while Galway progressed to the shield final where Cork awaited.  Both finals were played in a very competitive and sporting manner with Kilkenny the victors in the Cup Final while Cork were the winners in the Shield Final.
Divisions 2 and 3 of the blitz took place in the national training development centre in Abbotstown, again this was a very competitive days camogie for the teams involved with Antrim and Clare contesting the Division 2 Cup final with Clare the victors on a score line of 5-5 to 2-5 after extra time.
The division 3 decider was contested between Carlow and Meath, with Carlow prevailing on a score line of 3-7 to 0-1. In the Division 4 final between Wicklow and Donegal, Wicklow emerged as comprehensive winners in this game.
U14 All-Ireland Blitz
On Saturday the 8th of September the U 14 All-Ireland blitz took place across 6 venues in Dublin. The blitz is in its 8th year and saw a slight change this year with the addition of two new divisions. This addition worked well with 14 individual counties represented in the 7 finals. Below is a breakdown of both the U 14 and 17 weekends by numbers and also a chart outlining some of the participation numbers across 14/15/17 blitzes.
U 14/17 blitz weekend in numbers:
4
Provinces that took part in the inaugural Provincial U 17 blitz
7
Cothrom na Féinne Awards winners with two individual winners and five team winners.
8
Medics looking after the safety of players, mentors and supports
14
The number of counties involved in finals over the U 14 blitz
28
The number of Counties that took part in the U14 All-Ireland blitz
24
Referees who officiated matches throughout the Saturday
25
Staff and volunteers who co-ordinated venues. There were also a large number of club volunteers who helped with everything from marking and cutting pitches to providing tea and coffee facility’s and everything in-between. These people make the blitz days the enjoyable experience they are for all young people involved
58
Teams that represented their Counties and Provinces across various venues in Dublin
109
Games played between both blitzes
232
Mentors involved in coaching and mentoring girls on the day
1,400
Girls representing their Counties and Provinces
*Some numbers are estimations
Wexford School Blitz
Wexford have kicked off their Secondary School development blitzes for all 1st and 2nd year students in the county. Six teams took to the pitches in Oylegate on Wednesday 26th September for the first of the blitzes taking place this school term.

Well done to Gorey CS, Presentation Secondary School, Bunclody Vocational and Creagh College for your performances over the day. These blitzes are run annually by Wexford, with one per month in September, Oct and Nov and further taking place in the next school term, post-Christmas. 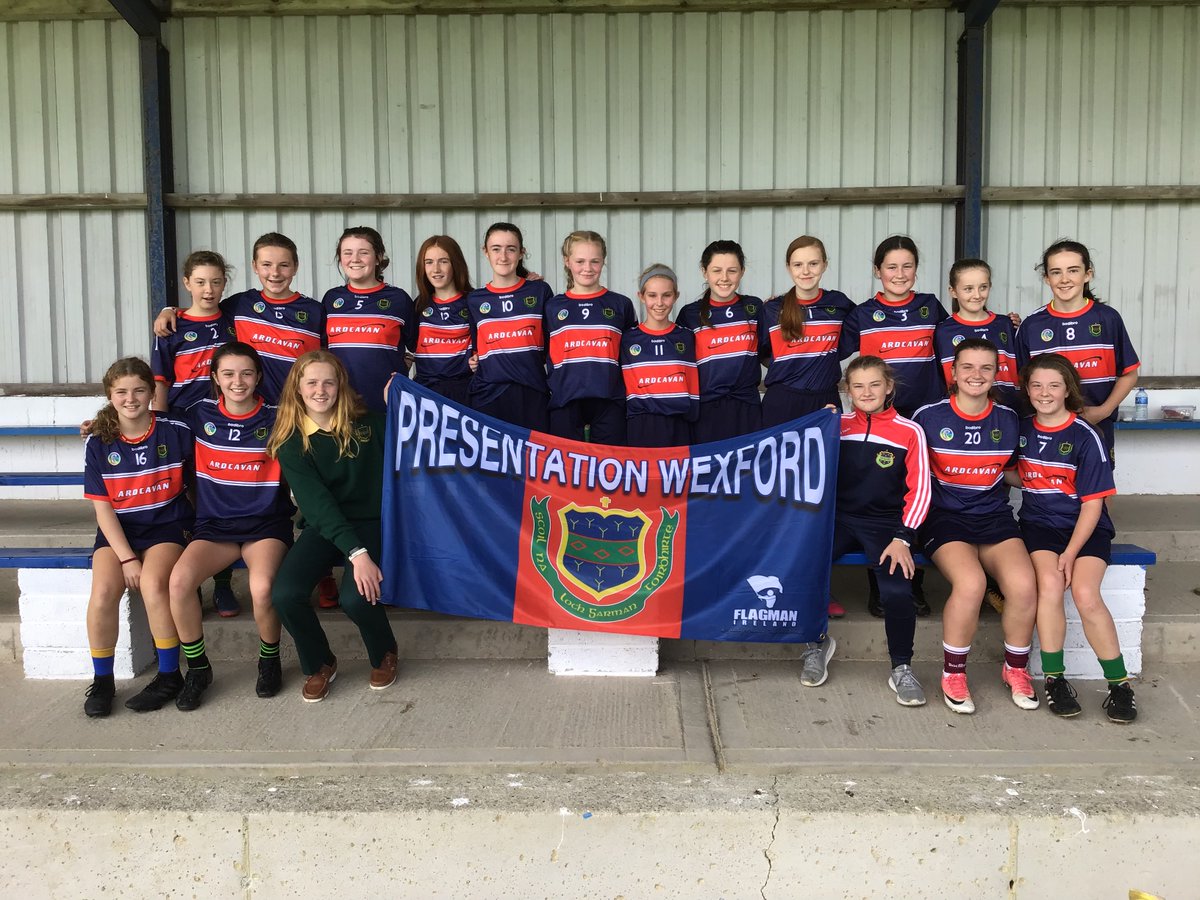 The next blitz is scheduled for Wednesday 17th of October and another on Wednesday 14th November. County Development officer Joe Roche welcomes all schools should they wish to come along.
Kilkenny clubs run their own Initiative
Over the past month, three clubs in Kilkenny have completed their own internal Hurl with Me style initiative across the county. Windgap, Killmacow and Paulstown Camogie clubs got the parents of their u10 girls out in big numbers and onto the pitches. With the help of tutor coaches, they were put through their paces in learning the basic skills of the game. This was to encourage them to have confidence in coaching their own daughters and hopefully entice them to get involved in coaching in the future. 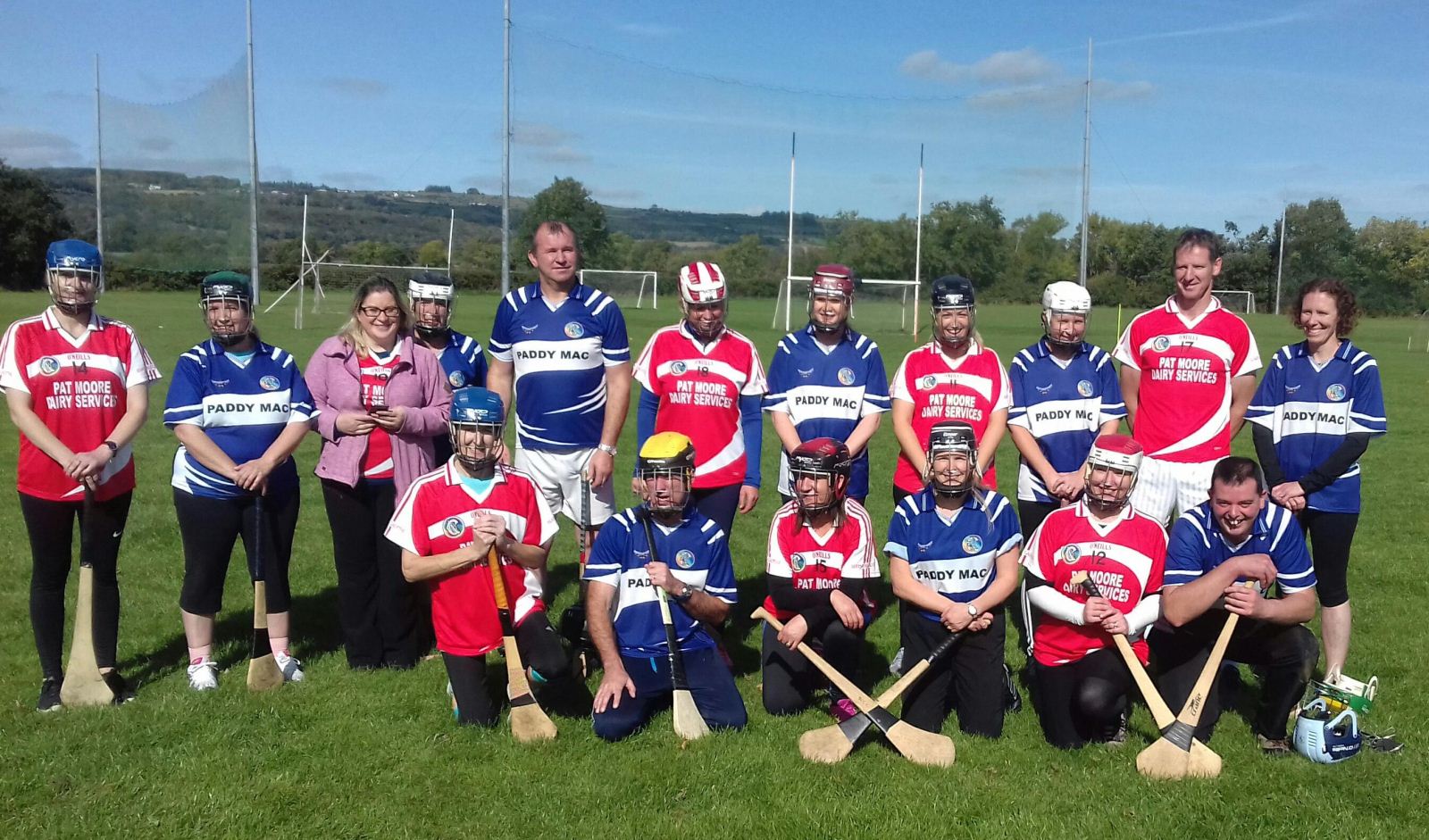 On Saturday 29th September, Windgap and Paulstown parents and u10’s took part in a Fun Day to mark the end of this successful programme. Thomastown who had completed the National Hurl with Me programme in June/July also attended with their u10 girls to make it a busy Camogie morning with a dance warm up, games galore and a lucky prize dip to wrap up. Many thanks to the tutor coaches – Geraldine Curtis, Calum Lyons, Chris Dempsey, Elizabeth Broderick and Roisin Breen for the fun and energy they brought to the sessions and thanks to the clubs for getting involved and to Paulstown for hosting the Fun Day!
Wexford hold Open Club Forum
On Wednesday 3rd October, Wexford County board held an Open Club Forum that invited all members of Camogie in the county to come together and share ideas and opinions on how to continue to develop Camogie across all levels. 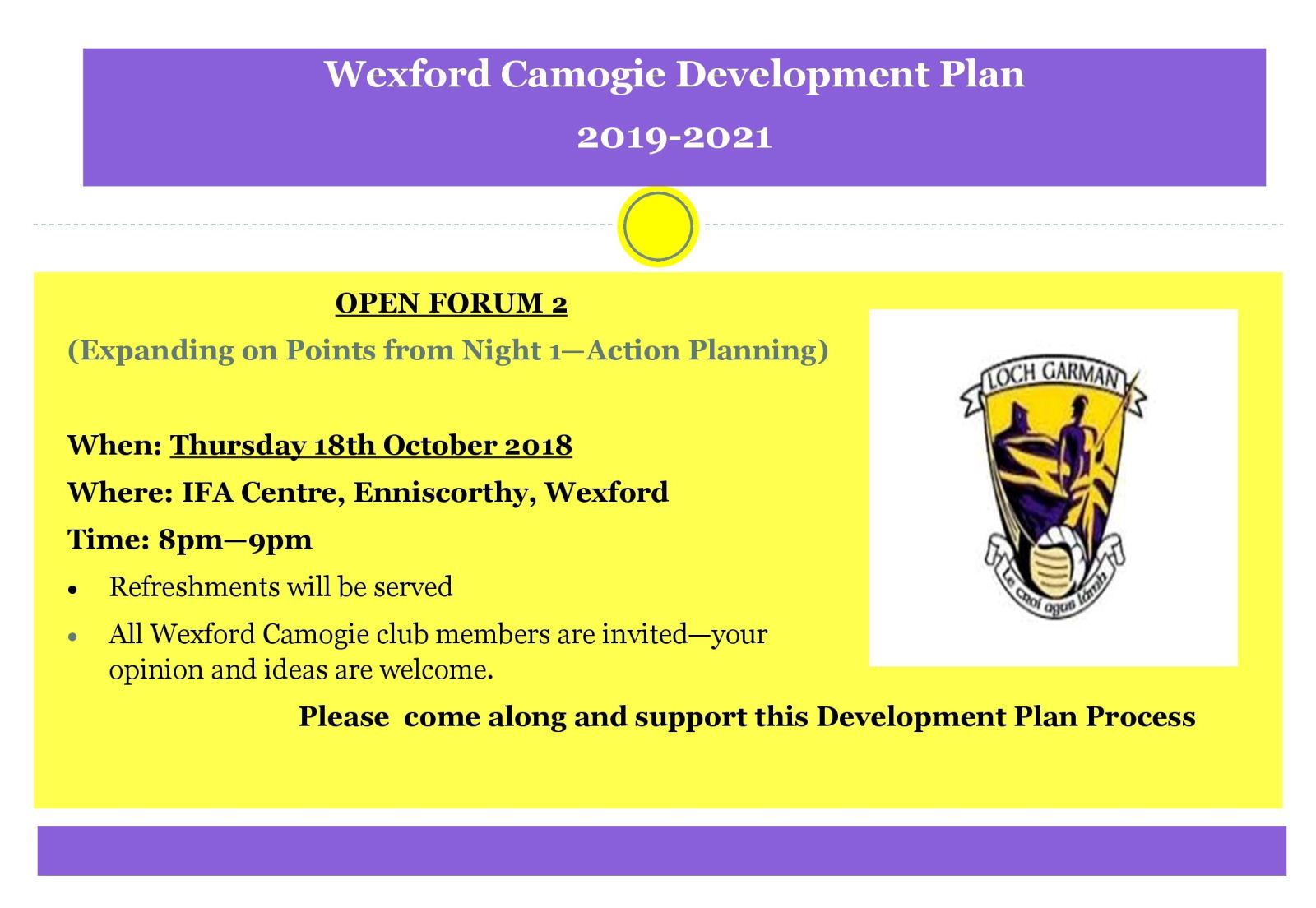 In an effort to make strides in creating a Development Plan, this evening forum saw approx. 50 people in total share their ideas in an open and positive way. Ideas on all aspects of development came to the fore on the night from clubs, coaching and refereeing through to schools, fundraising and retaining players.
Those in attendance got the opportunity to highlight what is already working well in the county and pinpoint areas where further work could reap rewards. The key and recurring points made on the night will now be brought forward to the next Forum meeting on Thursday 18th October, again in the IFA Centre, Enniscorthy from 8-9pm. All members of Camogie in Wexford are welcome to attend and can contact the county secretary for more details.
Louth Coaching Courses rolled out!
It’s that time of year again, where attention turns to developing coaches and mentors over the autumn and winter months, in preparation for the next years activities. On Saturday 29th September, Louth kicked off the coaching courses in Leinster, with a Foundation course ran in Philipstown. Most counties will now be hosting courses for their coaches over the coming months so keep an eye out on your county’s media outlets for advertising. Coaches/Mentors must now have completed a Safeguarding 1 course also in an effort to continue to provide safe and reliable environments for our players to play. These courses are 3hr in duration and be organised on request also, similar to the coaching courses. The following are the already scheduled courses in Leinster:
Fountainstown Man Organises ‘Noah’s Fun Day In Memory Of Grandson
Fountainstown man Jack McGrath and his family recently organised ‘Noah’s Fun Day’ in memory of Jack’s Grandson, Noah Martin McGrath, who passed away in Temple Street Children’s Hospital last November. 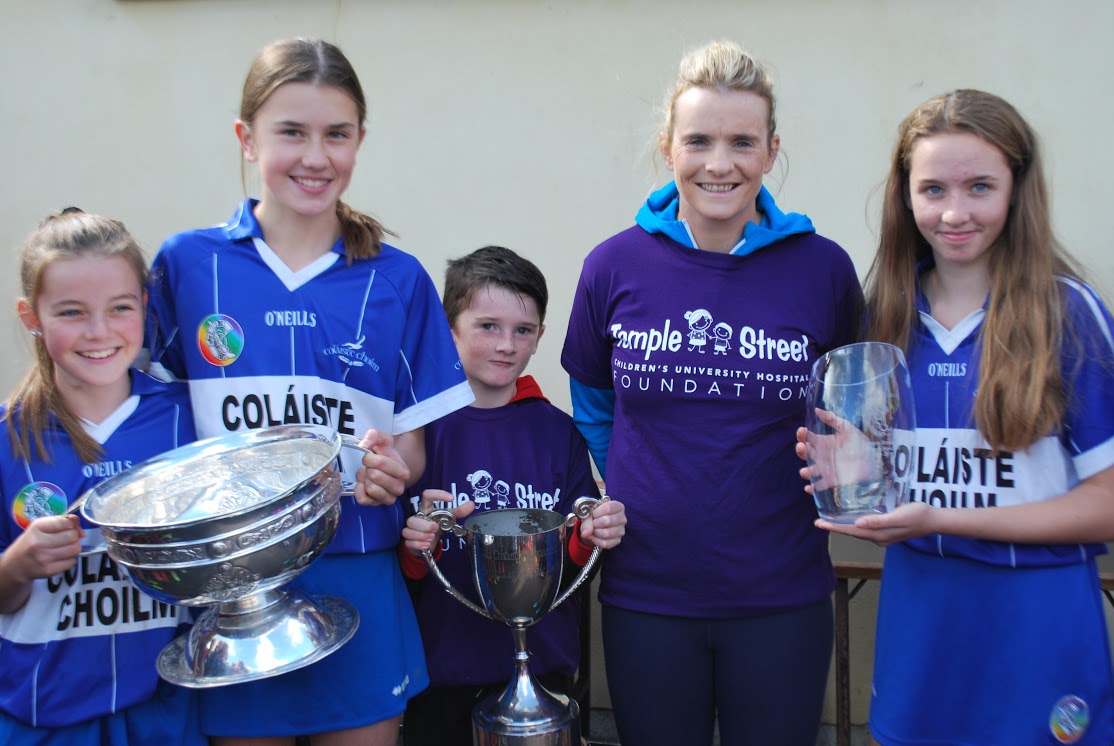 The Fun Day, as well as remembering Noah, also raised much needed funds for the hospital, with all proceeds from the day going to Temple Street. Speaking about their experience at Temple street, Jack said, “The nurses and staff were a great help during this awful time, so we were more than happy to try and raise some money to give back for the amazing help and support.”.
So far, around €2,000 has been raised but more money is still to be collected from the day.
The Fun Day took place in Coachford Camogie Club on September 21st and took the form of a Camogie Competition. It was held in collaboration with the Cork Camogie Colleges and with the help of Mr. Rob Lotty on the day. Over 120 players took part, coming from Coachford, Bandon, Ballincollig And Clonakilty, with assistance from the transition year students from Coachford.
Jack himself has a long association with the sport of Camogie as a coach, a referee across all grades including All Ireland Final level and he is the sponsor of the McGrath Intermediate All-Ireland Cup.
Cork player Briege Corkery was also in attendance on the day with the All Ireland Senior and Intermediate cups, recently won by Cork.
Boot bags and pens were sponsored by the Camogie Association and each player received a medal at the end of the day. 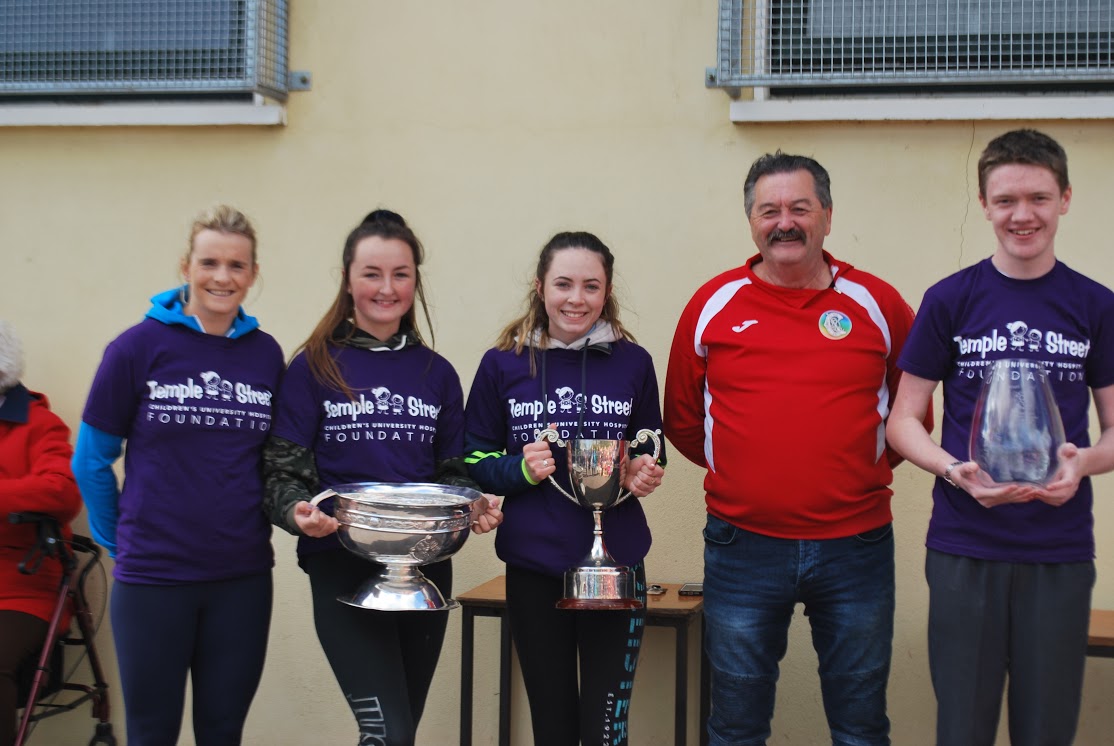 Speaking in conclusion, Jack thanked everyone who helped to make the day a success, “From myself and all our family we would like to thank all involved, without whom, we couldn't have pulled off such a successful event”.
Noah’s Fun Day is set to become an annual event, with the help of Cork Colleges Camogie.
Connacht 1st Year Participation Blitz
A fantastic day of Camogie was held in Craughwell GAA grounds Tuesday, October 2nd as the Connacht First Year participation event took place. On the day we had 12 schools from Connacht counties take to the field. The event catered for 15 a side A & B with St Brigids Loughrea, St Raphaels x 2, Gort C.S, Claregalway, Portumna C.S and Mountbellew all battling it out in the 15 a side games. 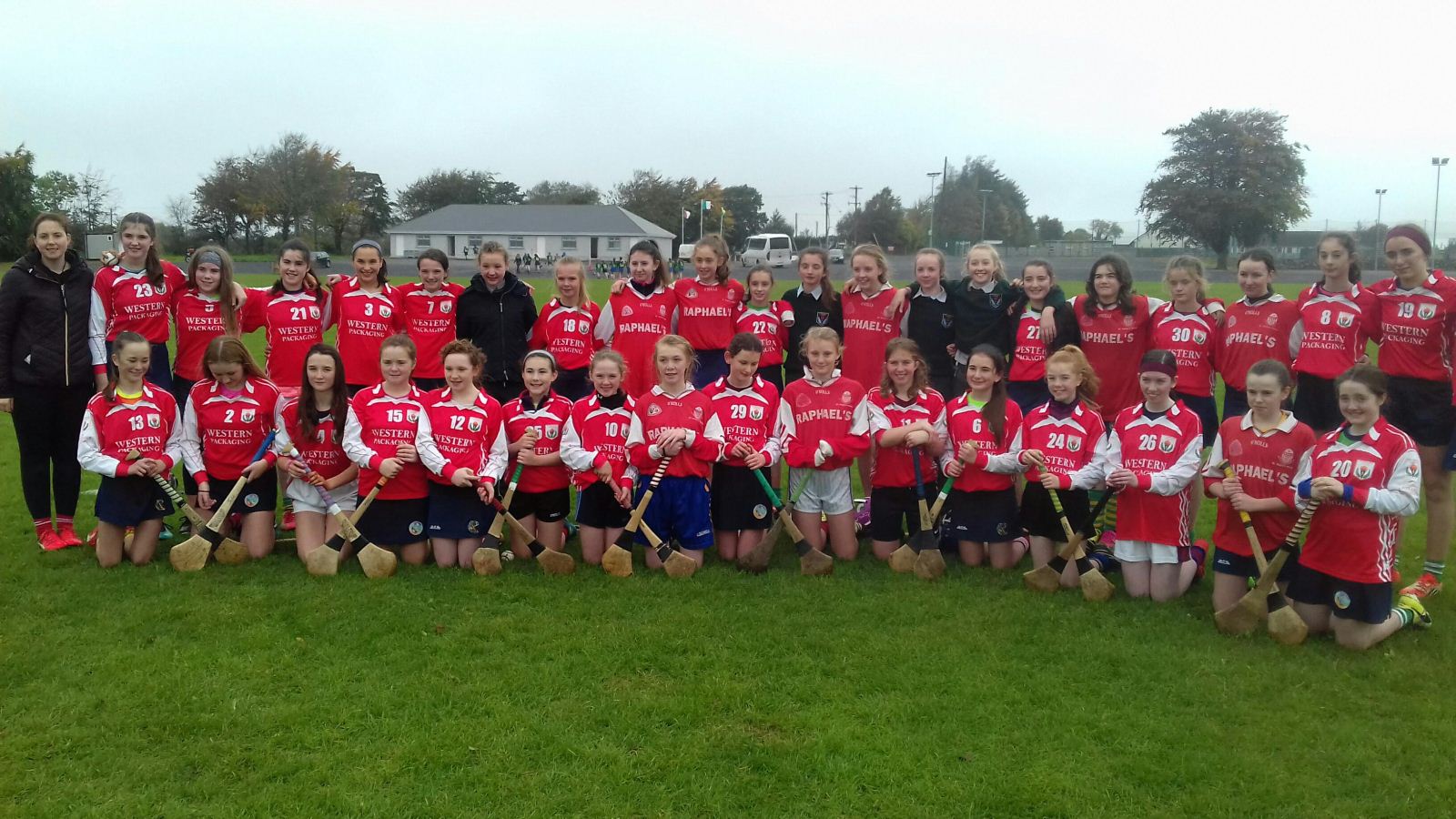 While St Enda's Galway, St Killian's New Inn, Dominican Galway, Gort (7's) and Roscommon C.C all took part in the 7 a side. Tuesday saw over 210 young women represent their school for the first time and there was a great sense of enjoyment amongst the teachers and players on the day.
A very successful day was had and much thanks must go to the schools, players, teachers and TY students for their efforts. Special thanks to Craughwell GAA for the use of their facilities. Thanks also to Brian Griffen (Galway development officer) and Donal Burke (Connacht schools) and John Mullins (Connacht P&G coordinator) for organising the day.
Mairead Meehan Tournament
The Annual Mairead Meehan 1st Year 7 a side tournament will take place on Thursday, October 25th. Schools can enter 2 teams as there will be an A & B side on the day. This is always a well-contested event, looking forward to a great day of Camogie.