Latest
Conclusion of Wicklow County Development Squads
Wicklow County Development Squads concluded their 4-week series of workshops last Thursday night, November 30th. The final night saw the older age group of u16-u18 players being given a run through of correct technique and posture in a range of targeted gym exercises. Exercises were demonstrated by Geraldine Curtis as she explained the purpose and benefit each exercise can have on their Camogie, their strength and their overall health, whilst aiming to remain injury free.
The girls all enjoyed the practical element of the sessions, with an opportunity to try the exercises themselves and be given corrections. There were questions a plenty on many of the myths that surround gym work and it was evident when leaving that the players realized that it has its place in developing themselves as an intercounty player but needs to do correctly to reap the rewards.
Following the practical session, the girls, many of whom will complete their Leaving Certificates in coming year or two, attended a talk on how best to balance life, school, exams and Camogie and the importance of time management and looking after all aspects of both physical and mental health.
These workshops over the past four weeks will hopefully stand to the development of Wicklow’s Camogie players going forward. A big thank you must go to Ballinakill Centre of Excellence and Aughrim GAA for the use of their facilities and accommodating us so brilliantly and to Breda Donnelly and all the players themselves for attending in such great numbers every night.
Commencement of Leinster Coaching Courses
Coaching courses have been up and running across Leinster in the past few months with Foundation level courses taking place in Wexford, Offaly, Kilkenny, Louth and Wicklow, whilst Offaly also hosted a Level 1 course in Crinkill, Birr. There will be a number of additional courses running in early 2018 so keep an eye out for notification on your club email and get qualified for the coming camogie season. For more information or to book a coaching course in Leinster, please contact Sabrina Larkin, Leinster Participation and Growth Coordinator at sabrina.larkin@camogie.ie or 086 7961859.
Inaugural Castlebar Area Schools Blitz at Breaffy Arena
The Breaffy Sports Arena was the venue recently as four schools from the Castlebar area came to together to vie for the inaugural area camogie blitz. The schools involved were St Angelas, Scoil Raifteiri, Straide NS & Snugboro NS. The indoor arena proved very popular with the girls as over 60 girls took part in the event.
In the end, it was Scoil Raifteiri (Cup) and St Angelas (Shield) who took the honours. After the blitz, Edwin Quinn (Chair Castlebar Camogie Club) presented the winning captains with their respective trophies. The blitz was coordinated by local school’s coach Kevin O’Boyle in conjunction with the Castlebar Camogie Club, and is aimed at recruiting girls for National Feile na nGael which Castlebar Mitchels will be hosting in 2018.
Results:
Cup Final: Scoil Raifteiri 2 Snugboro 0
Shield Final: St Angelas 2 Straide 1 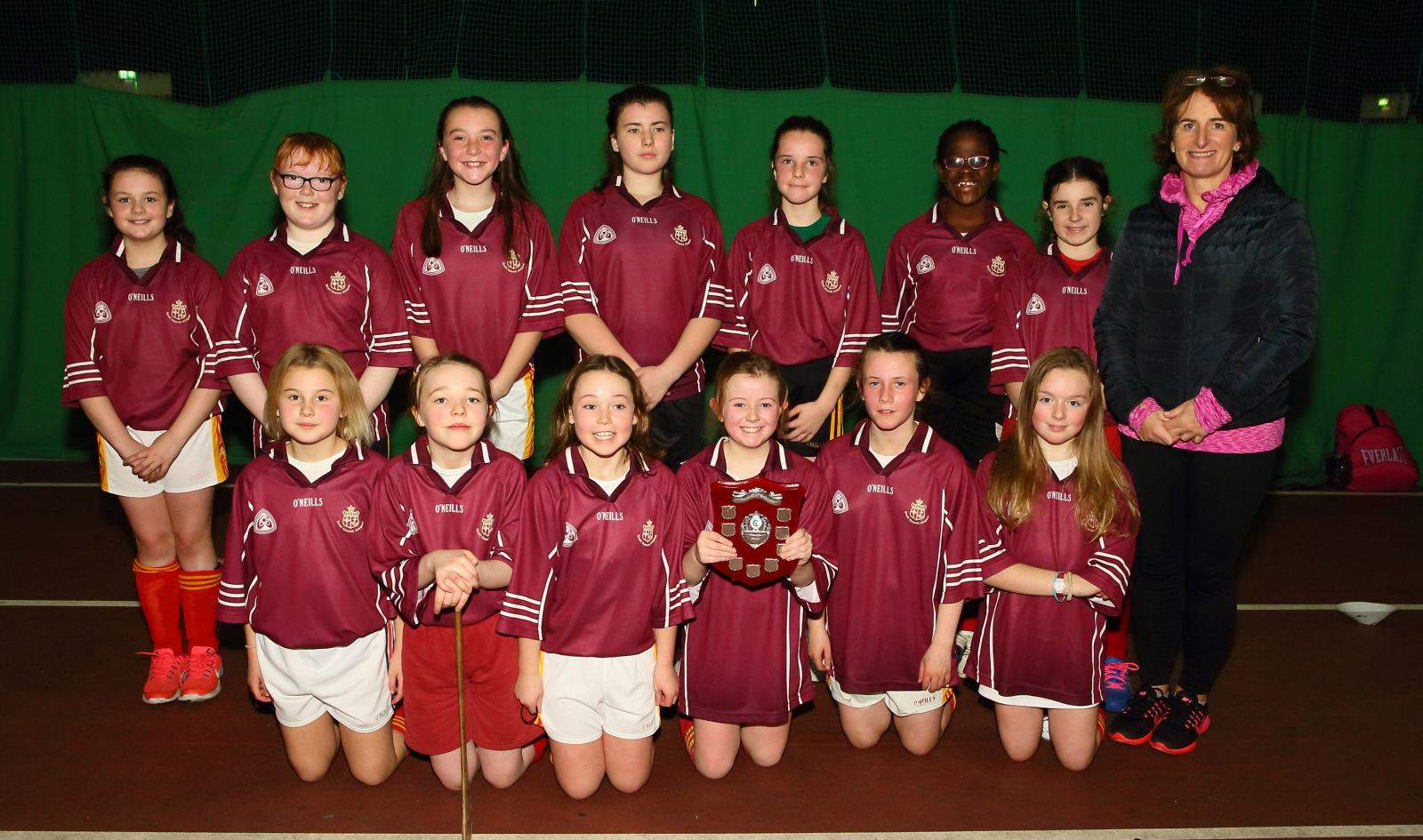