Latest
Mayoral reception for Dublin Camogie Schools
A reception for St.Josephs College, Maryfield College (pictured above) and Dominican College took place in the Mansion House on Wednesday the 9th April. This reception was in recognition of the three schools reaching the O'Neills All Ireland camogie schools finals in their respective grade. Well done to all involved in the schools including teachers, coaches, parents and players. Speakers at the event included Cllr. Henry Upton who is Deputy Lord Mayor of Dublin, Joan O Flynn, Ard Stiurthoir of the Camogie Association, Mark Leamy, Chairperson of Dublin Post Primary committee and Patrick Martin, Chairperson of Dublin Camogie board.
See pictures of the event next week on the development news round up.
Maryfield College Drumcondra
The school has won 4 All Irelands and have been runners up once. Captain Aisling Maher won the Evening Herald Sports Star of the Week award for the second time after her performance in the Dublin final. As 11 of the players are in sixth year this was their final campaign for the school and it made it all the more special.

In the All Ireland quarter final they played Holy Rosary from Galway winning by 16 points but they had a much tighter encounter with SHS Tullamore in the semi-final coming out by 3 points. They faced strong opposition in St. Joseph's of Doon with a draw on their first outing, and losing the replay by two points. Most of the Maryfield players are members of the St. Vincent's club but six play for Whitehall Colmcille and two for Na Fianna. Approximately 12 of these girls are involved in the Dublin Development/Inter county Squads. (main picture above)
St Joseph’s College Lucan
St Joseph’s College beat Connacht Champions St Cuan's (Galway) in the All-Ireland Quarter Final, Leinster Champions Mountrath (Laois) in the Semi-final, and went on to meet Munster Champions St Joseph's Tulla (Clare) in the All-Ireland Final.  After falling behind for the most of the game the girls dug deep and pulled the game back to eventually run out winners on a scoreline of 3-6 to 2-7.  This panel consists of all Lucan Sarsfields club players except for 1 girl who plays with St Pat's of Palmerstown. They have several girls involved in Dublin squads including Laura O'Mahony, Jessica Condron, Samantha Fitzgerald, Orlaith Murphy, Emma O'Flynn, Meabh Dowler, Jessica McClelland and Tara O'Connor. 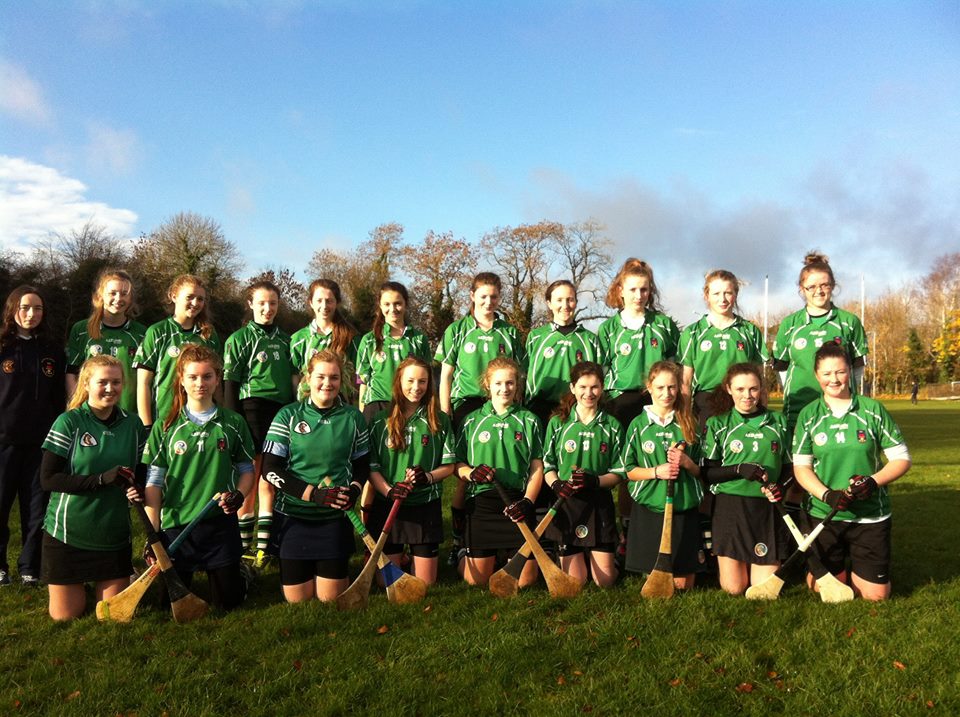 Dominican College Griffth Avenue
In their quarter final Dominican College faced Taylor Hill, Galway, without captain Niamh Witter. Dominican were behind the majority of the game but a spirited performance from the team in the second half got the girls through on a scoreline of 3-8 to 2-5 with a woman of the match performance from reliable midfielder Niamh Rock.  The All Ireland semi-final was against Loreto Mullingar where they recorded a 1-12 to 1-6 victory. Stellar performances that day were from Mary Cronin, Niamh Rock, Niamh Witter and Niamh Gleeson to name but a few.  The All Ireland final was in Nenagh against Glanmire of Cork. With great performances from Clodagh Ellis, Niamh Gleeson and Roisin O Donoghue in the first half to keep Dominican in the game. Glanmire started the second half well, but it was all Dominican in the closing stages who showed great resilience and team spirit and while they fell short by a soliatry point, they can nevertheless look back on their adventures in 2013/2014 with great satisfaction. The panel is made up of 3 clubs drawing from St Vincents, Na Fianna and Whitehall and 10 of the panel are involved in county squads. 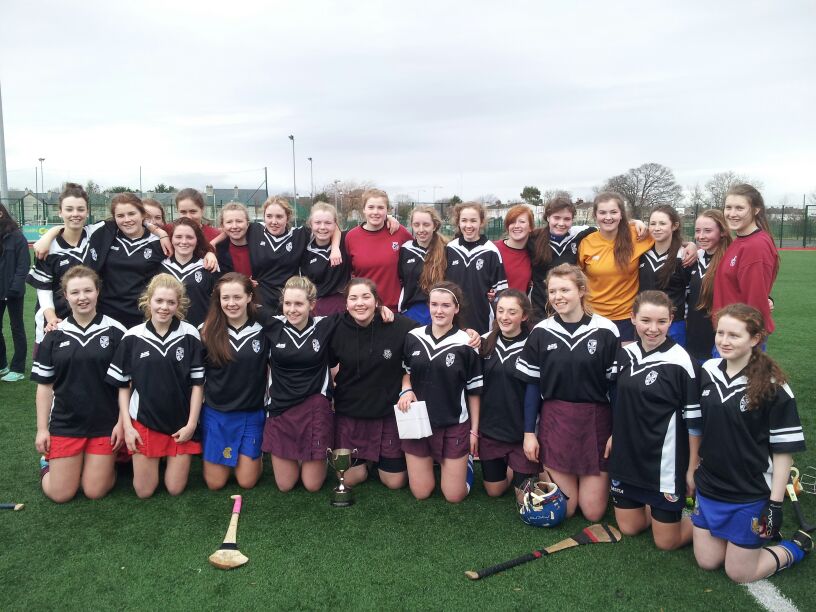 Cumann na mBunscol Blitzes in Mayo
Last week was a busy week in Mayo for Cumann na mBunscol activity in Camogie a two regional blitzes took place. The first took place on the 3rd of April in Castlebar for the schools in the west of Mayo with 8 schools attending. Over 100 girls participated on the day in total with St.Peters National school Snugboro winning out. Other schools that took part included St.Angelas Castlebar, Quays School Westport, Scoil Padraigh Westport, Gaelscoil Westprot, Balla National school, Ballyvary and Straide National schools.
The east blitz took place in the Centre of Excellence in Bekan on the 4th April with 5 teams and over 60 girls taking part in total. Kilmovee National school won the east division. Other schools that took part included Tooreen and Kilkelly National school, Derrinabroc and Carracastle National school. Thanks to Adrian Hession for the organisation of the two blitzes and to the schools who participated.
The final of the competition between St.Peters Snugboro and Kilmovee national school tooke place in Bekan on Thursday the 10th April.
Best of luck to both teams on the day! 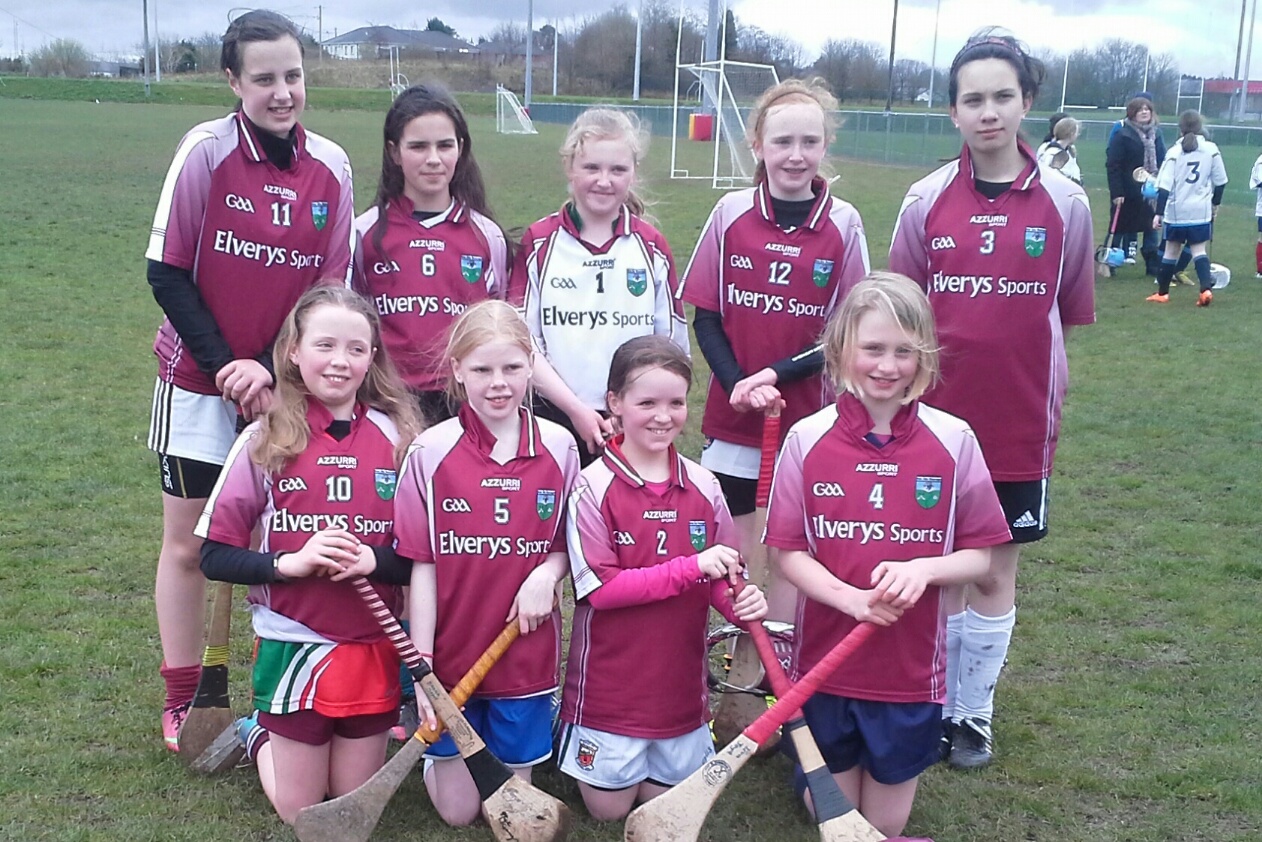 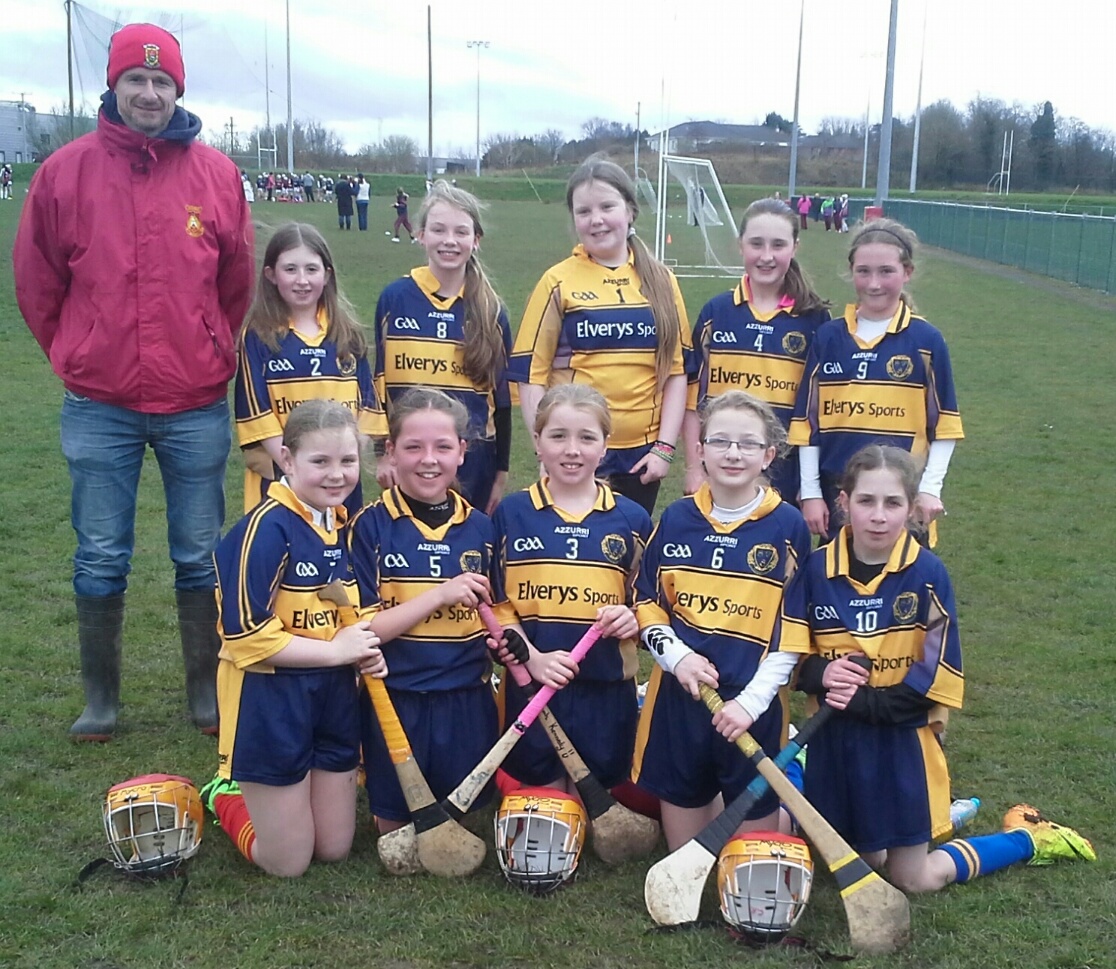 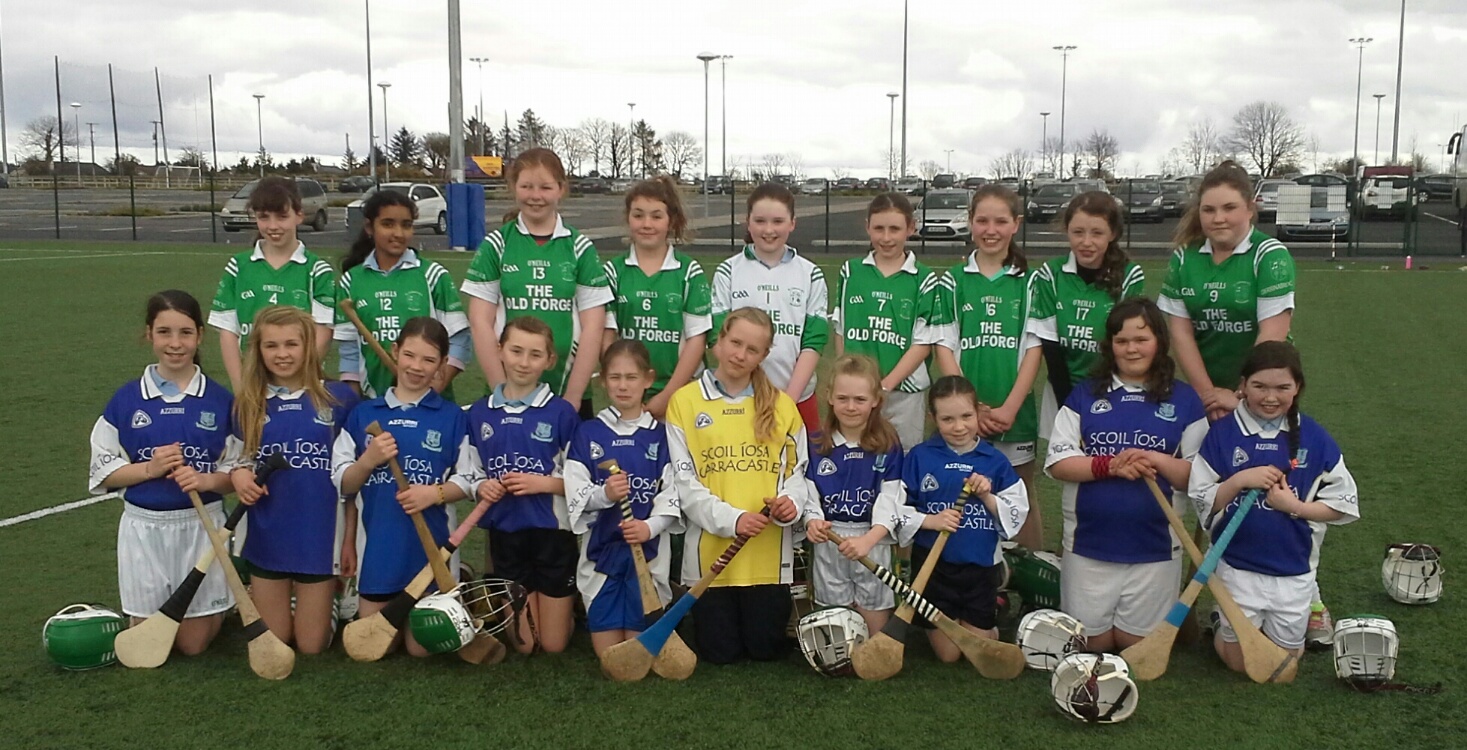 Derrinabroc and Carracastle National Schools
Workshop with new club coaches in Kildare
24 players and 9 coaches attended a basic skills workshop with Patrick Mullaney RDO for Kildare on Monday the 7th of April in Coill Dubh Camogie club in Kildare. The workshop went through the basic skills of the game of camogie and included lots of fun games that can be completed with underage camogie players. Best wishes to the new club for the coming year!
Monaghan Blitz
An U16 secondary schools blitz will take place on Friday the 11th of April in Cloughan, Monaghan. 6 schools from Donegal, Monaghan, Cavan are attending. For more information on this blitz contact lisa@camogie.ie
Mum & Me Programme
A mum and me programme took place in Galbally Limerick with the final day on the programme on the 5th of April. 15 took part in the programme in total with James Ryan, Limerick hurler acting as a tutor on the programme. Well done to all involved.
Student placement from Limerick Institute of Technology in conjunction with the Camogie Association
Donnacha O Brien from Hollyford in north tipperary has started a schools programme of coaching for camogie as part of work palcement from  Limerick Institute of Technology. He will be coaching in schools and working in clubs in the areas of Nenagh, Templemore, Thurles, Holycross, Borrisoleigh and Newport. Donnacha started the programme of coaching on 31st March and will be coaching on average 500 pupils per week.
For more information on this coaching programme contact ross@camogie.ie
Active School Week
The Department of Education and Skills is delighted to welcome the HSE as co-sponsor for Active School Week (2014).
The poster below shows that the Active school week will run from the 12th– 16th May this year.
The Active School Week (ASW) poster arrived in all schools this week. All schools are encouraged to organise an Active School Week as part of their annual school calendar, regardless of whether or not they are working towards the Active School Flag (ASF).
Active School Week encourages schools to:
·         Organise fun, inclusive events for all members of the school community
·         Collaborate with parents, their local community and outside agencies to promote physical activity
·         Energise the school day by finding as many opportunities as possible to get students more active
throughout the day
·         Find ways to make ALL subject areas more physically active
·         Promote active travel
·         Challenge all members of the school community to achieve 60 minutes of physical activity every day
There is an Active School Week section on the ASF website www.activeschoolflag.ie which includes lots of ASW photographs and ideas. Many of the school presentations under the Active Schools section also feature ASW programmes.