Latest
Leinster Camogie in conjunction with the Camogie Association would like to invite you to attend a “Club and County” forum which will be held in Croke Park on the 8th of November. This forum has been designed around feedback that received from club and county officers outlining certain struggles that camogie volunteer’s face on a daily basis. There will be 3 guest speakers addressing the topics most prevalent to Camogie clubs/counties. All relevant information is on the flyer above. If you require further information, please feel free to contact Patrick Mullaney on 087-4146933 or by email patrick@camogie.ie
Other development news this week include:
Ø  Camogie Tutor in service
Ø  Code of Ethics Course Offaly
Ø  Lifestyle Programme Roscommon
Ø  Westmeath 1st year Blitz
Ø  Come & Try it Blitz Monaghan
Ø  Longford Mum & Me
Ø  Donaghmore/Ashbourne celebrate 110 years of Camogie
Camogie Tutor In Service
17 tutors attended an in service in Good Counsel Camogie club in Dublin last Saturday the 11th October. The day consisted of a practical and theory session. Martin Fogarty of Kilkenny delivered the practical on skill development through games based training for 12-16 year old girls and all tutors thoroughly enjoyed it and took a lot of information from the session. 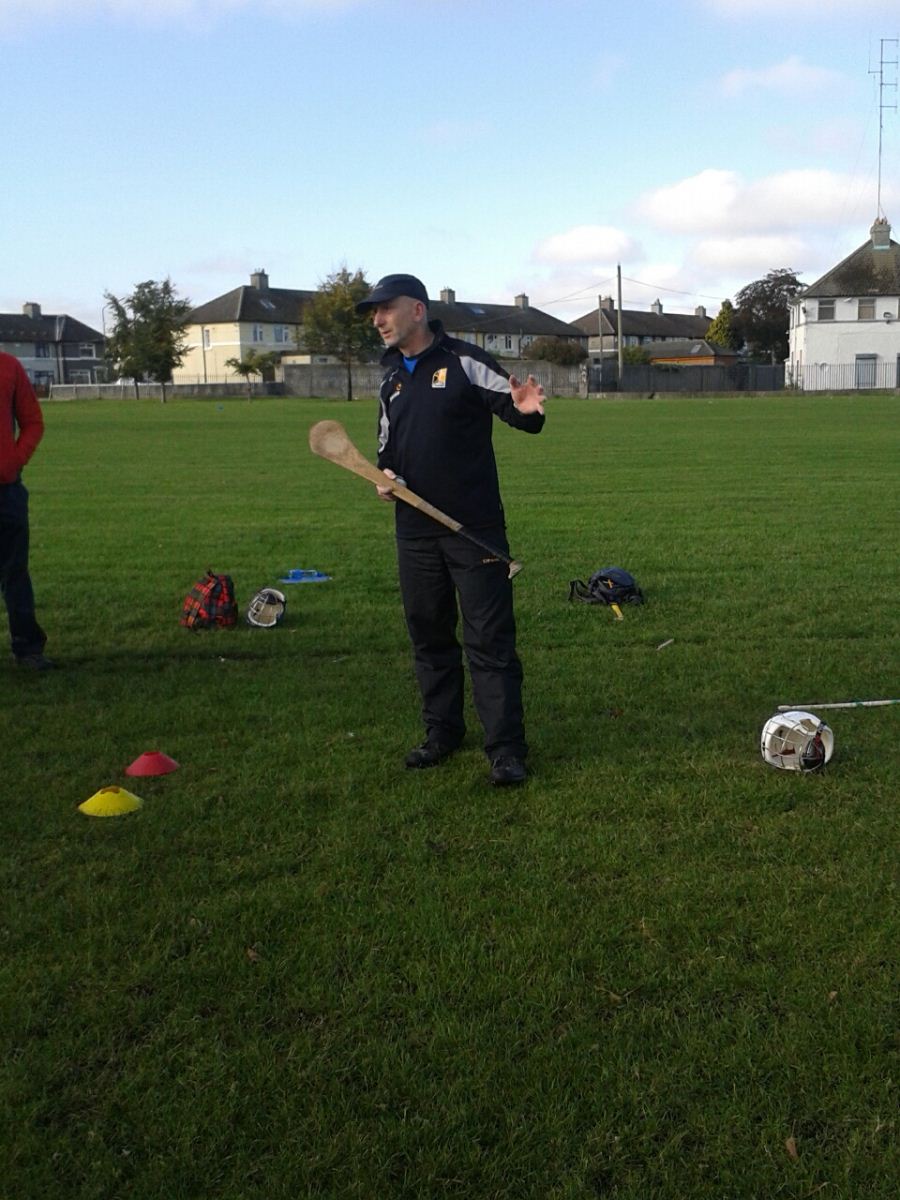 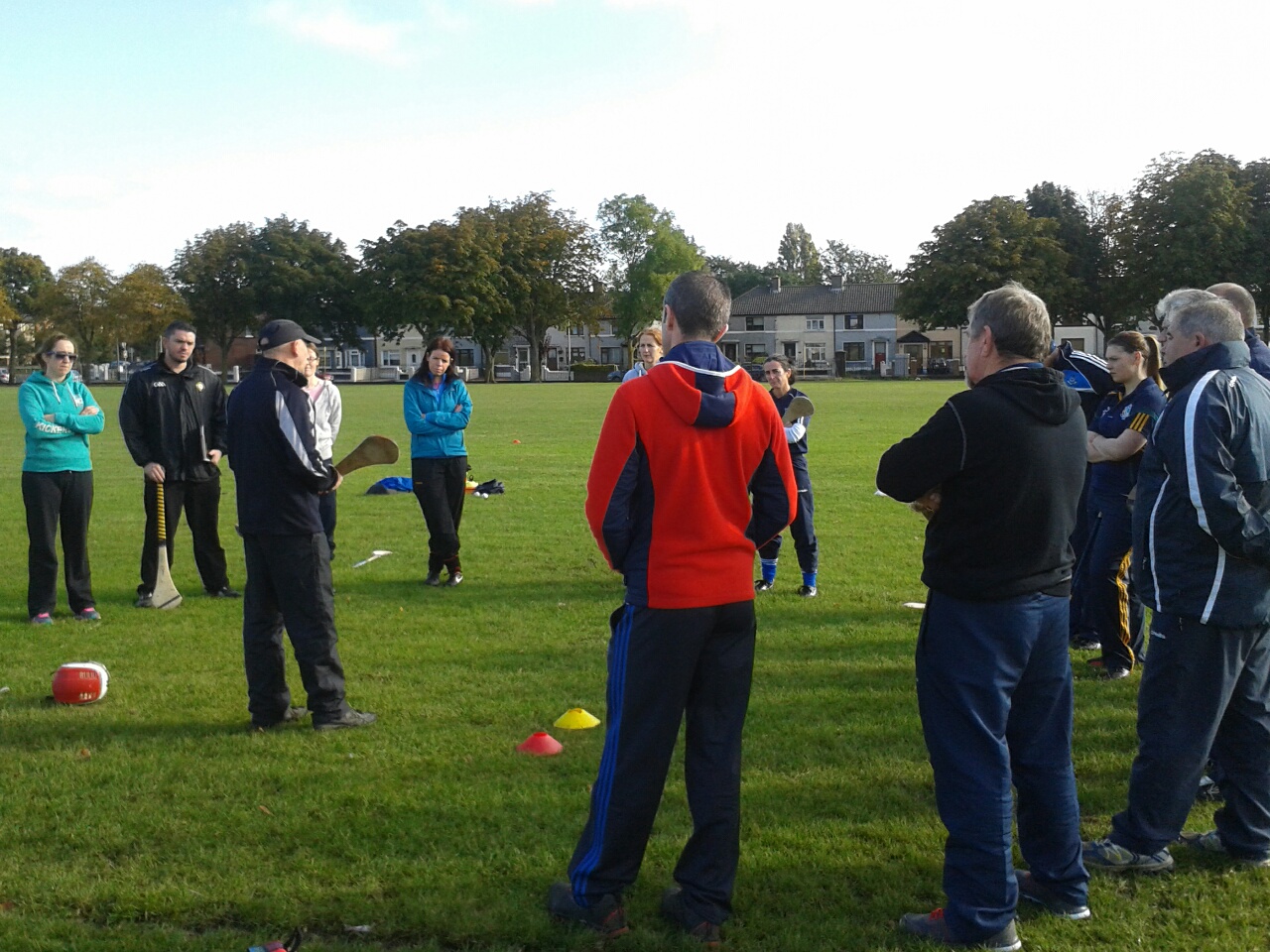 Tutor group during practical session
Code of Ethics Course Offaly
Well done to those who attended the Code of Ethics is Kilcormac in Offaly on Monday 13th October last. 17 people took part on the night. Thanks to Offaly Sports Partnership for assisting in facilitating the evening and to Karen Walsh who tutored on the evening. 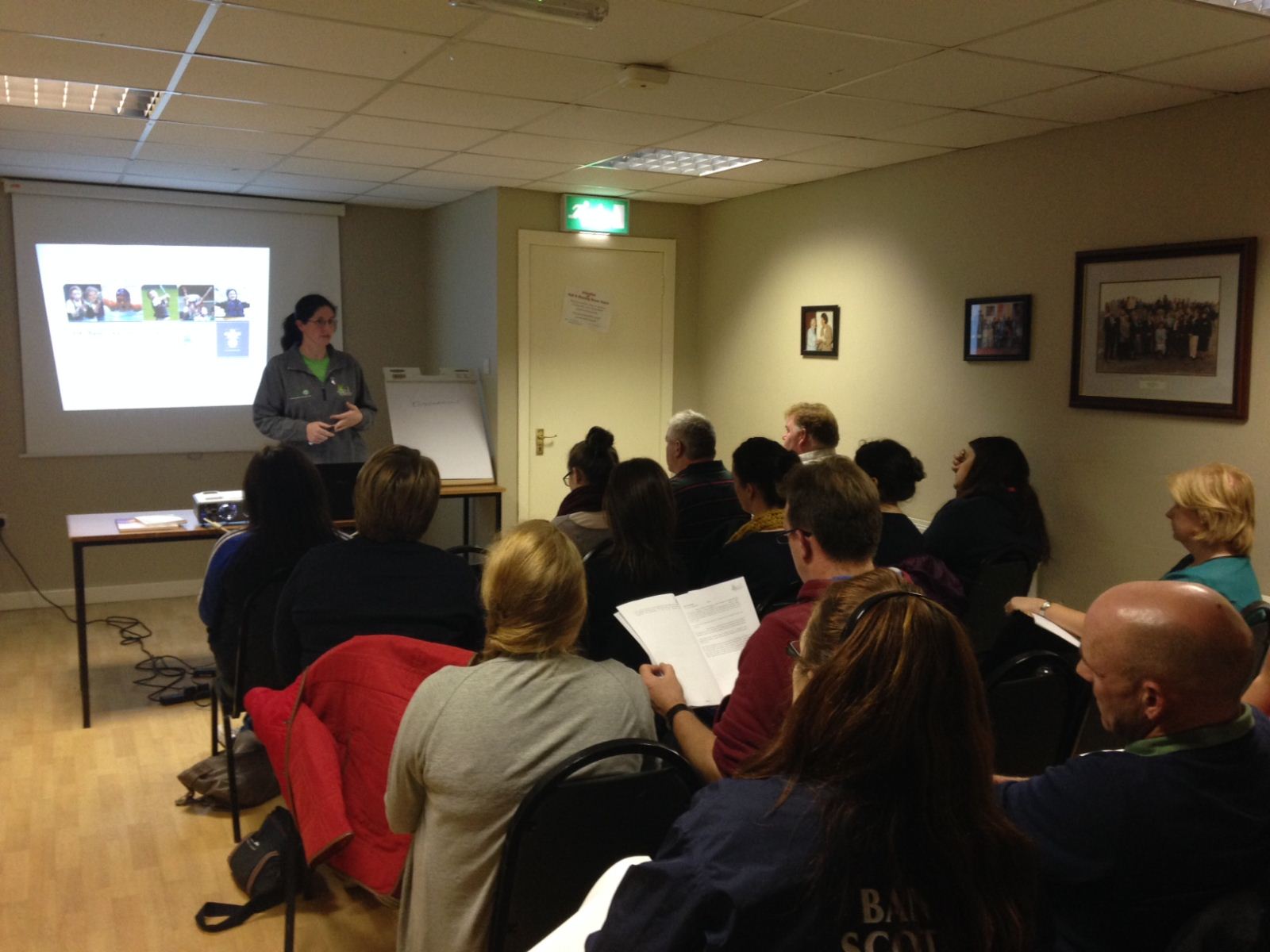 Offaly Code of Ethics Course
Lifestyle Programme Roscommon
A Lifestyle programme was run in Roscommon on the 4th and 11th of October with 20 girls attending. Damien Curley Roscommon & Four Roads Senior Hurler coached on the camp over the two weekends. 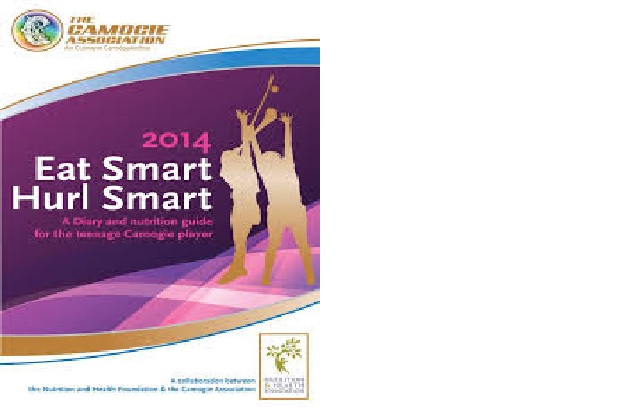 Westmeath 1st Year Blitz
An inaugural 1st year 7 a-side camogie competition was organised in Westmeath with the aim of getting as many 1st year girls participating in the game once they enter secondary school. The competition was organised as a 7 a-side competition, giving small schools an opportunity to participate and schools with large numbers were allowed enter as many teams as they wished with maximum panels of 10 players. Five schools participated on the day, two of which were participating in competition for the first time. Participating schools included Loreto Mulingar, Castlepollard, Columba College Killucan, the Community School in Mullingar and a special request from Loreto Navan enabled them to participate on the day.  Loreto 2 won the competition on the day by defeating Columba College in the Final. 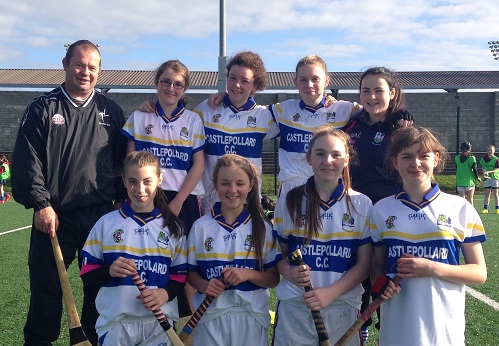 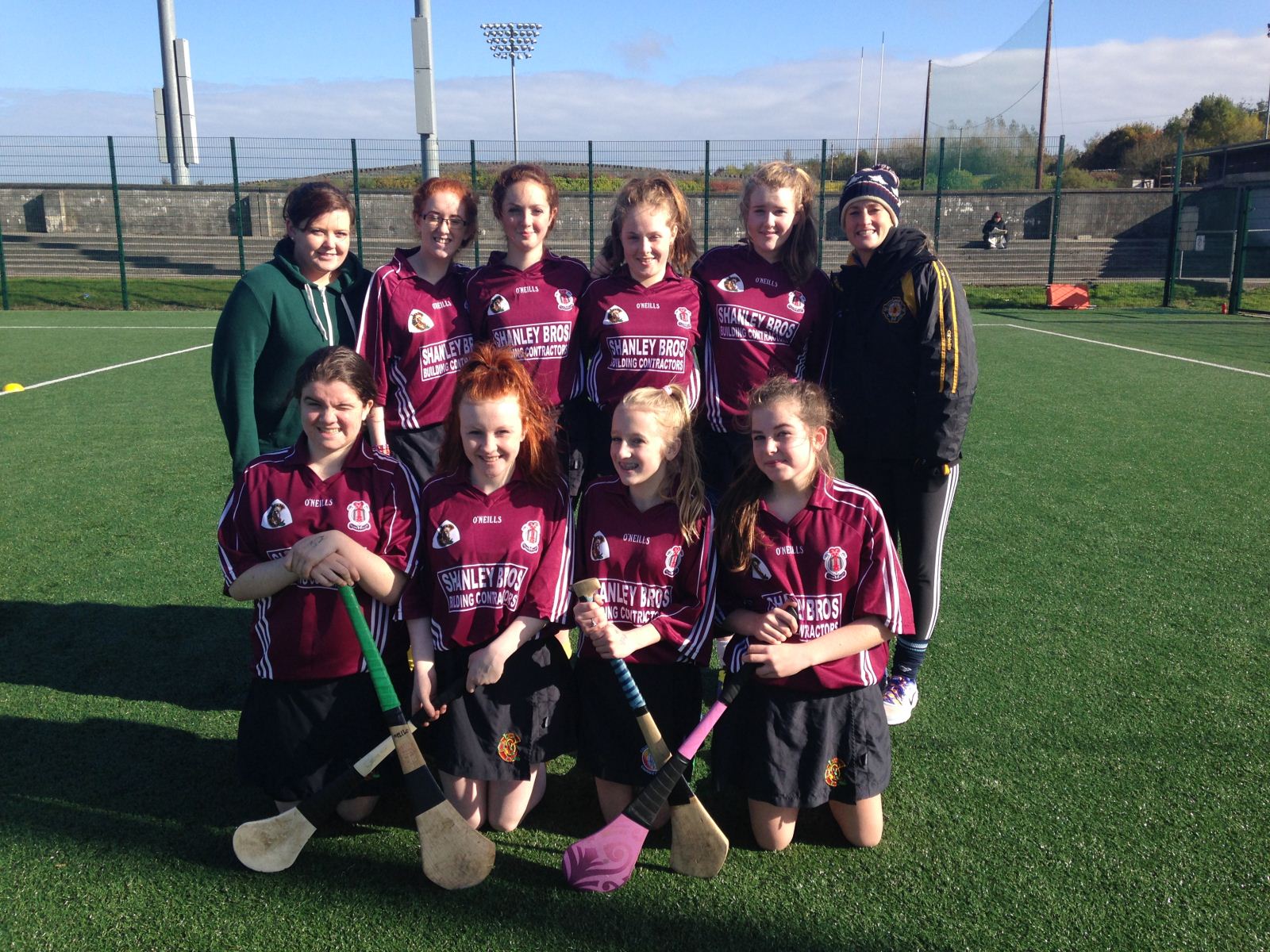 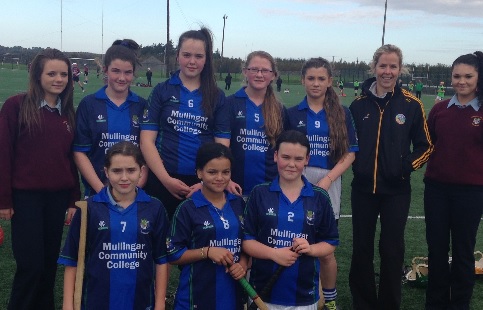 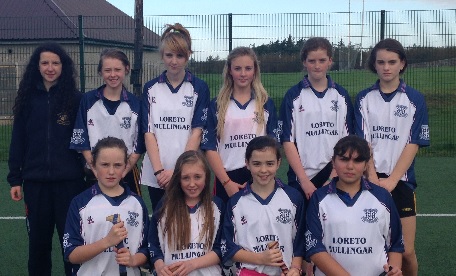 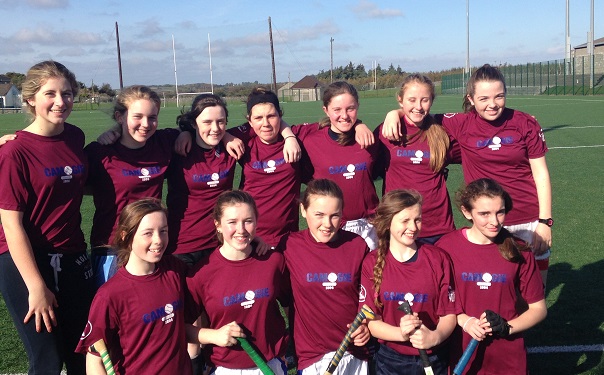 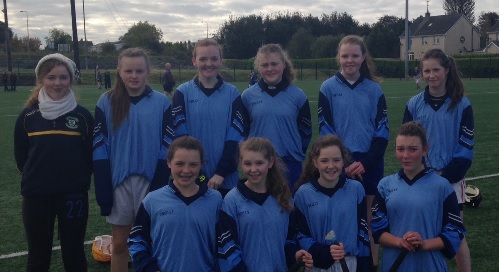 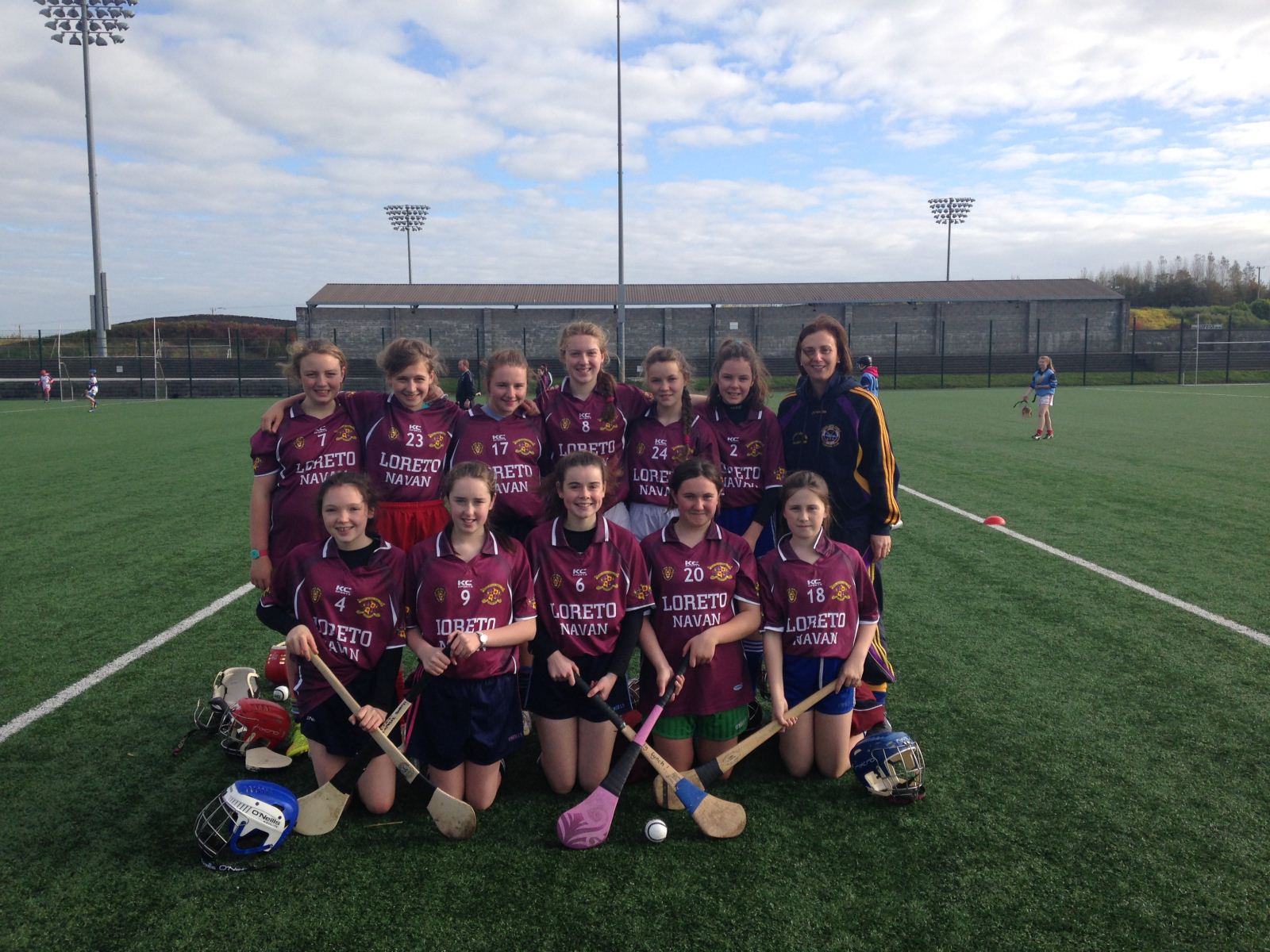 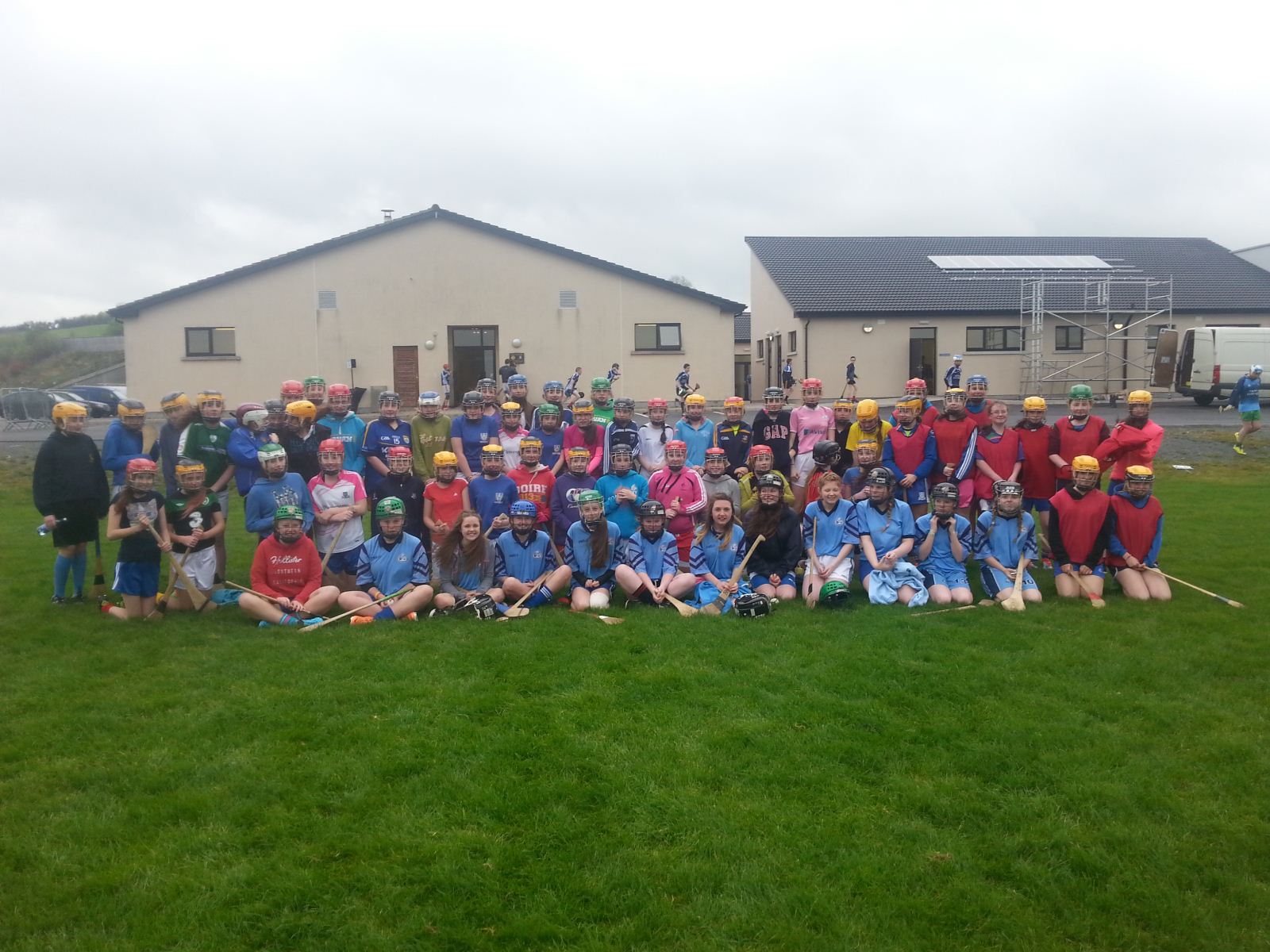 Monaghan Group
Mum & Me Longford
The Mum & Me programme continued in new club area Kenagh in Longford this week. A further 6 parents joined this week with 25 mums & guardians attending in total. For more information or to get involved contact Lizzie Flynn on email lflynn@camogie.ie 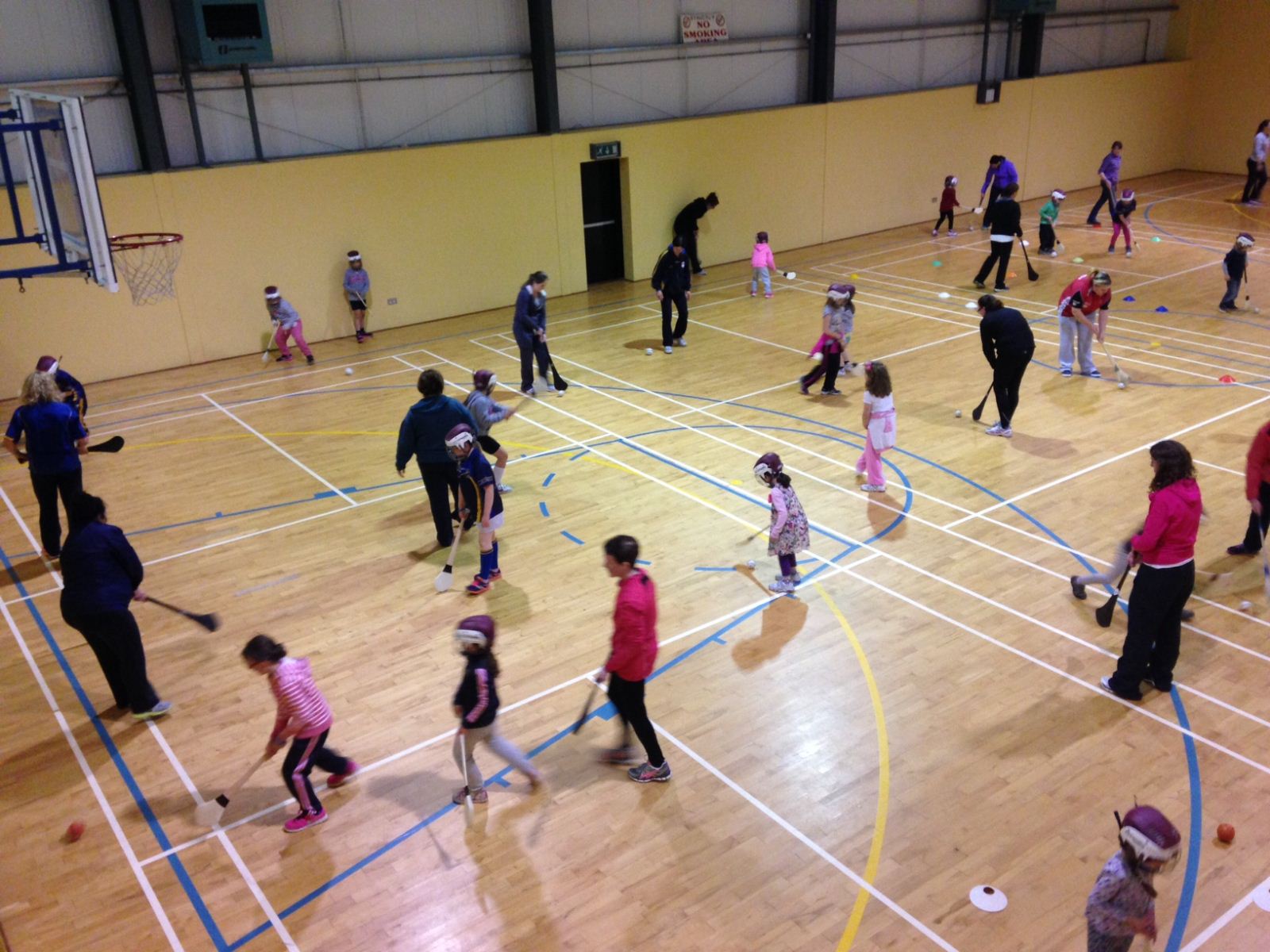 Action from Mum and Me in Longford
Donaghmore/Ashbourne celebrate 110 years of Camogie
Donaghmore/ Ashbourne Camogie Club helped commemorate the 110 year anniversary of the Camogie Association by holding a weekend of events on Saturday and Sunday (11th & 12th October).
The weekend kicked off with the planting of a memorial tree in honour of Peg & James Kavanagh. Peg was one of the founder members of Donaghmore Camogie Club in 1974.
. 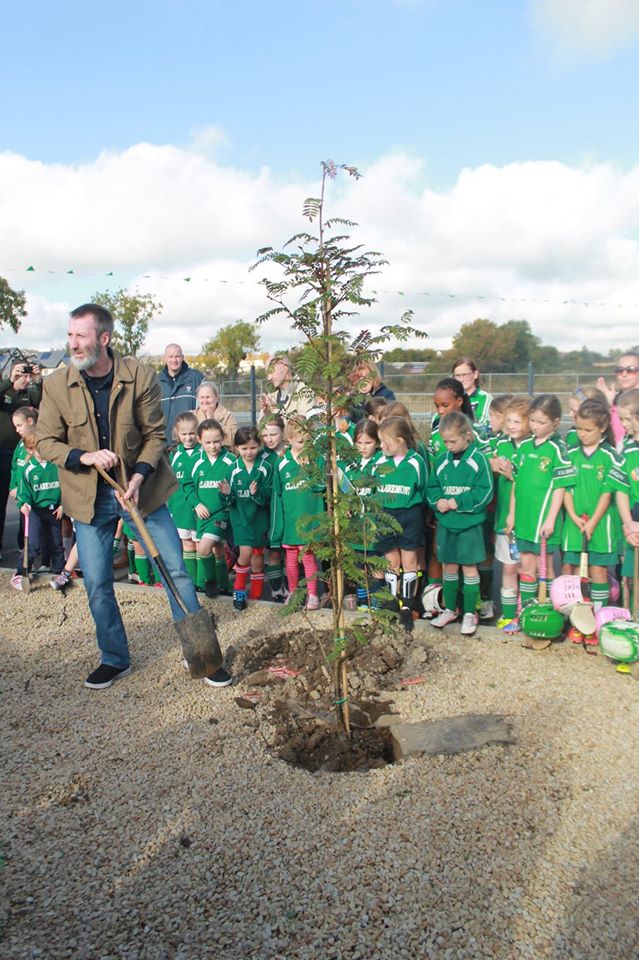 Planting of Peg & James Kavanagh Memotial Tree
Following the tree planting the on field action began with the club hosting an underage camogie blitz across the Donaghmore/ Ashbourne GAA club’s campus with simultaneous matches for u8, u10, u12 and u14 age groups. A total of over 400 girls took part in this blitz from a selection of clubs from Meath and also Dublin. The clubs who took part were Donaghmore/ Ashbourne, Dunderry, Drumree, Navan, Kilmessan, Kiltale, Ratoath, Na Fianna & Trim from Co. Meath. Also Naomh Fionnbarra from Co. Dublin took part. 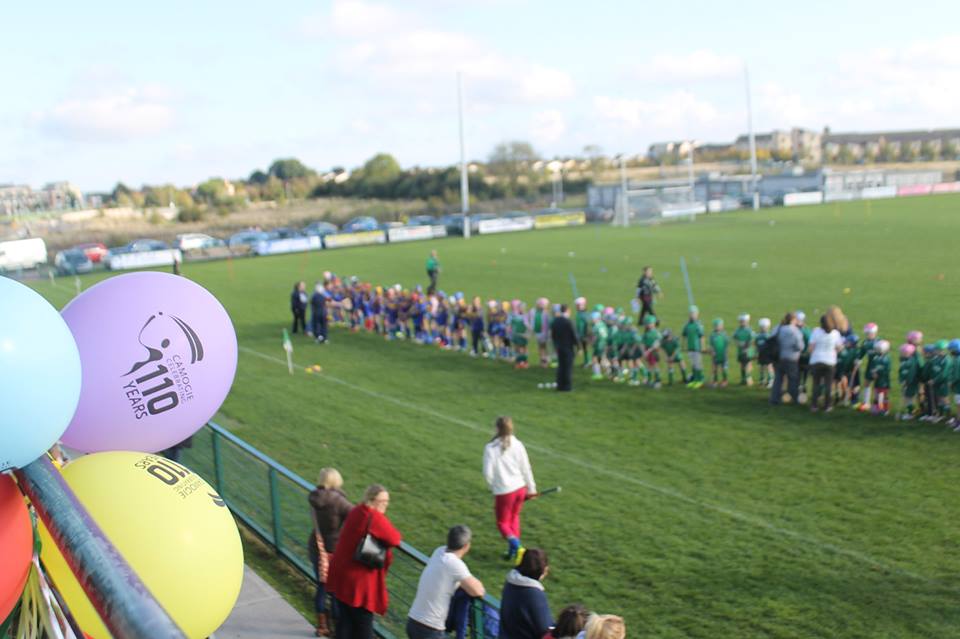 Teams get ready for the blitz 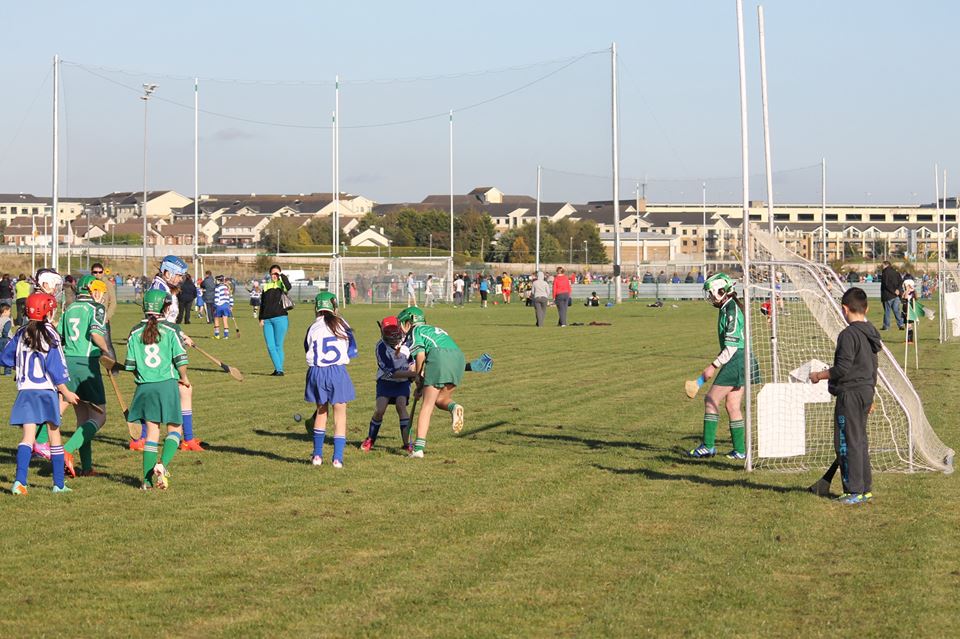 Action from Blitz
Upon completion of the blitz games all children were presented with commemoration medals before taking to the field again to form the figure of 110 on the pitch.
On the Sunday morning the Camogie Club held a 5km Fun Run/ Walk in further commemoration of the 110 year anniversary. 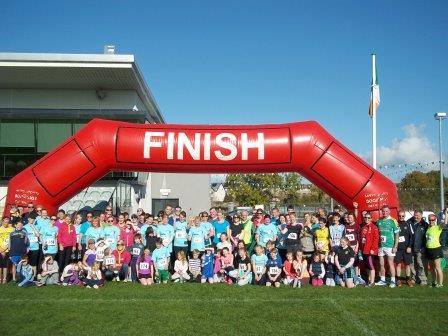 The weekend proved to be a massive success for the club. Thanks to all the volunteers & helpers throughout both days and in the weeks leading up to the event who were so important in making it such a success.