Denise Gaule has seen it and done it all. She has endured more than her share of heartbreak, being involved in six losing All-Ireland teams since the first in 2009, the same year she won a minor championship with Kilkenny.

She has inflicted her share of it too and driving the spear into Cork’s hearts with her injury-time winning point. She brushed it off as no big thing, a bit of luck, just as was the case when her late goal from a penalty two years ago put Galway away.

That’s what Gaule does.

This isn’t false modesty though. It is rooted in the type of mindset you would love all your Hollywood stars to possess but seems woven into the Kilkenny DNA in particular and has always been a part of the Gaule make-up,

The Windgap legend is a two-time player of the year, a former young player of the year and a five-time All-Star. After Sunday’s Glen Dimplex All-Ireland narrow triumph over a tremendous Cork in a truly fantastic final, she now has three ultimate victories, which feels like a fairer reflection of all she and another survivor from 13 years ago, Katie Power have given camogie. A word too, in this respect, to Leann Fennelly, who remains on the squad having played in that defeat.

Gaule has an excuse to be pretentious but the reason she is revered in her dressing room and admired beyond it is that she was always one for mixing it in the trenches. Winning player of the match awards for scoring eight points from frees often embarrassed her but invariably she got those nods because she mixed the highlights reel with a voracious appetite to get down and dirty. Gaule can be top scorer but also queen of the one-percenters.

For some reason, the frees hadn’t gone so well towards the end of the quarter-final victory over Dublin and the malaise continued to the semi-final, when Katie Nolan eventually took over.

She missed her first on Sunday and Nolan was given the responsibility immediately. Nolan, who has been such an addition to the team in recent years, slotted a couple but after one attempt slid wide, Gaule took over again. She was astray with a reasonable chance but when it was all on the line, there was no doubt. The sliotar never moved from the black spot once it was sent on its way from 46m out.

It was a finish of immense bravery from the Cats’ enduring champion given how the placed balls had been going. She had hit two class points from play in 30 first-half seconds but it was the aerial catches, the ball won on the deck and the clearances from deep in her own half that really marked her performance and illustrated her belief.

The 31-year-old had done this tens of thousands of times before, in training and games and on her own with a bag of sliotars. Just one more needed. So any doubts?

What was in your head?

“Just please go over really,” comes the reply with the trademark mischievous Gaule grin. “Please go over! In fairness, the last two matches haven’t went well but it’s just to grind it out. I’m not afraid to step away from them and let Katie take them. There’s plenty other players there, Mary O’Connell, anyone could have stepped up there.

“The last one? I dunno – I was lucky, it was right in front of the post to be honest with you. Just about.”

“It always is with us. I just said to Breda (Holmes), ‘Why can’t we ever do anything easy?’ It was always gonna be the same with Cork. It was an unreal match. They were just brilliant and it took everything we had to come out on the right side.”

This is a second All-Ireland now in three seasons for Kilkenny. We thought they were in transition in 2020, when four or five new players came in. Remarkably, seven of that team weren’t involved on Sunday and so the same was being said all year. Will we ever learn?

It speaks to the job Brian Dowling and his team have done but also to the quality of the newcomers, and the spirit that was enhanced as they dealt with the tragic death of Dowling’s uncle in a house fire just a few weeks after coach Tommy Shefflin’s brother Paul died suddenly at the age of 40. Players lost grandparents too and then the Doyle sisters, Kellyann and Aoife both suffered cruciate ligament injuries, Kellyann being struck down for the third time.

“Honestly, some of these girls are our best friends. I don’t know. We’d do anything for each other out on the pitch, off the pitch, the management team – everyone is just a unit.

“Look, everyone goes through hard times and at the end of the day it’s just a match but it means everything for them 60 minutes and we’re just delighted to be able to come out the right side of it and celebrate with family and friends who weren’t able to be there in 2020. It’ll mean a hell of a lot to them. It’s a proud day for Kilkenny.” 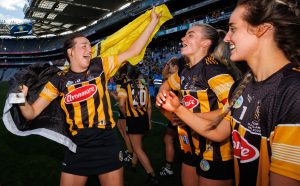 There was a tremendous photo of Nolan and Gaule sharing a joke after the semi-final win over Galway, a little-and-large combo that have tormented opposition defences. The duo were mugging and hugging again in Croke Park. They are a serious tag team and Gaule had huge praise for Kilkenny’s own version of The Duracell Bunny, who was named player of the match after a five-point contribution (three from play) and probably busting her GPS tracker.

“She was unbelievable. She’s phenomenal since she came in. She’s a ray of sunshine in training and she’d never let you have your head down for a minute. She’s just absolutely a little buzzer going around the place and she showed that today.”

Dowling revealed afterwards that Dwyer had put all her eggs in the senior basket by pulling out of the intermediate squad at the start of the year. She wasn’t getting much game time until everything clicked in a training match.

The James Stephens attacker capitalised on the opportunities that came as a result, scoring a point off the bench in the quarter-final and semi-final before carving her name into the lore of camogie forever more with that opportunistic off-the-sod goal.

Gaule gave a bit more detail on the hour that changed the trajectory of Dwyer’s – and thus we have to say Kilkenny’s – season.

“She had some match in training down in Ballyhale one day. I swear, I’d say she must have scored about 3-6. She went on every back and no one could handle her. Since then she’s come on in every match and made an impact. It’s brilliant for her going into next year and her head will be up another level.

“And it’s brilliant for all the younger girls here today. They don’t have as much memories of hurt as what we do and you’ll see them push on now for the next few years.”

Gaule couldn’t help but think of absent friends and she hinted at a passing on of the torch. But even that was an act of selflessness, of thinking about Kilkenny and its future.

“It’s about the team. There’s no one here for themselves. It’s a team game and individual awards are nice and all that, but at the end of the day what’s the point in having them when you don’t have an All-Ireland medal in the back pocket.

“To be able to share this with friends and my mother just there, I don’t know how she got onto the pitch! In the moment, you think it’s the best one ever. To be fair, I missed a few of the girls here beside me, the likes of Meg (Farrell, who took a year out to go travelling), (Collette) Dormer and Davina (Tobin, who both retired at the end of last season) but it’s their team now really, the younger girls, and we’re just happy to be able to contribute in some way, shape or form in the future.”

How lucky they are to have her. And this week, she will teach the youngsters how to celebrate.