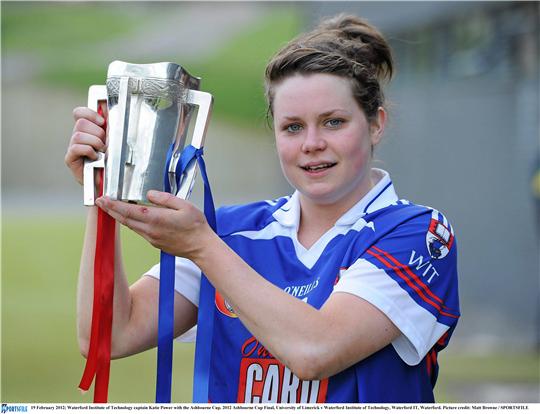 Waterford IT collected their fourth Ashbourne title after a hard fought win over University of Limerick in the magnificent WIT Sports Campus on Sunday, Feb 19th. Meanwhile, goals from Aoife Bugler, Catriona Regan, Orlaith Durkan and Emma Brennan helped Dublin City University to a 4-7 to 0-4 victory over Queen’s University Belfast in the Purcell Cup final.

In the Ashbourne Shield University of Ulster Jordanstown recorded a thrilling 2-13 to 3-9 win over National University of Ireland Galway courtesy of goals from Karen Kielt and Captain Sara Louise Carr.

Cork Institute of Technology were 4-11 to 0-2 winners in the Purcell Shield final against Athlone IT with Denise Luby firing 3-4, while Mary Immaculate College Limerick were grateful to a 10-point haul from Naomi Carroll in their 0-15 to 0-3 win over St Patrick’s College Drumcondra in the Fr Meachair Cup final. St Mary’s Belfast claimed the honours in the Fr Meachair Shield decider 3-6 to 3-4 against IT Tralee.

The key proposals of the plan include:

The countdown is on to the All Ireland Camogie Club Finals in Croke Park on March 4th. Oulart the Ballagh (Wexford) will face Drom/Inch (Tipperary) in the Senior final at 3.00pm while at 1.00pm Eoghan Rua (Derry) and Ardrahan (Galway) will battle it out for the Intermediate crown. Tickets are priced at €15 per adult; €10 for students & OAP; €5 for juveniles. Please note group orders and family pass details are available on Camogie.ie and are available on pre-sale only.

For further information check out www.camogie.ie

This year’s club finals photocall will take place in Croke Park on Tuesday, February 28th. Check out Sportsfile for photographs while interviews with this year’s Captains will be available on camogie.ie and also the Camogie Association Facebook.

The Legends are back!

The Legends tournament will take place on Saturday, March 3rd in St Judes GAA Club. Armagh, Antrim, Offaly, Wexford, Kilkenny, Tipperary, Cork, Galway are taking part in this year’s seven-a-side tournament with Kilkenny aiming to retain their crown. The Camogie Legends Cup is named in honour of the late Biddy Phillips, a national camogie referee and administrator, who passed away on July 6th 2010. Phillips managed Tipperary to their first Senior Camogie All Ireland title in 1999.  She was a long serving member of the Camogie Association serving on the National Referees Committee. She took charge of the All Ireland Senior Camogie Final in 2007 and was also referee for the Intermediate, Junior & Senior Club All Ireland Finals between 1993 and 1999. She also acted as treasurer of Tipperary Camogie Board from 1988 to 2000.

Caman & Run is part of this year’s line up at the All Ireland Club Finals with eight schools competing in the novelty solo & handpass relay race. The deadline date for entry has been extended to Friday, Feb 24th and full details will be available on www.camogie.ie

Spread the word and tell your friends to click on and like the Camogie Association facebook page on facebook.com/CamogieAssociation. We have a fantastic prize of a €500 voucher from O’Neills to give away to one lucky winner as part of this year’s All Ireland Camogie Club Finals. Click on LIKE IT and share it with your friends to be in with a chance to win!

Keep up to date with all the news on the Camogie Leagues in the Saturday and Monday editions of the Irish Daily Star while news, reports and fixtures will also be available on camogie.ie

A Game of Our Own: Camogie’s Story

Following the hugely successful launch of A Game of Our Own: Camogie’s Story at Croke Park on December 15th, a number of regional launches are taking place. Ulster Camogie Council will host a book launch on February 27th at the Morgan Athletic Grounds followed by Connacht Camogie Council on March 23rd.