Latest
See the nine players nominated in the Half-Back Line position for an All-Stars award, sponsored by Liberty Insurance.
Róisín McMahon (Clare) – It has been two years since Clare last won an All-Stars award so they will be hoping this is third time lucky with half-back Róisín McMahon bagging herself a nomination. The Newmarket defender will be hoping she adds some silverware to the collection after narrowly missing out for both club and county this year.

Roisin McMahon (Clare) fends off pressure from Galway attacker.
Pamela Mackey (Cork) – The Rebels have an abundance of experience all over the pitch and Mackey is another player who brings a wealth of experience to the side. First brought into the squad in 2009, the Douglas club player has already been nominated six times, winning three accolades to go along with the four All-Ireland titles also in the bag.

Pamela Mackey (Cork) with Katie Power (Kilkenny)
Gemma O’Connor (Cork) – Another Rebel who has talent and experience in abundance, O’Connor has been at the fore front of many a positive result for Cork Camogie. After securing her eighth All-Ireland title last month the soldier from St. Finbarrs is looking to add another All-Stars award to the collection, having already collected nine.

Gemma O'Connor (Cork) during the Liberty Insurance All-Ireland Final 2017
Eimear O’Sullivan (Cork) – O’Sullivan is another highly decorated Cork athlete, having experienced glory in the League, Provincial and All-Ireland Championships with the county set up. Having secured her first All-Stars award back in 2014 O’Sullivan will be hoping to add another one to the collection. 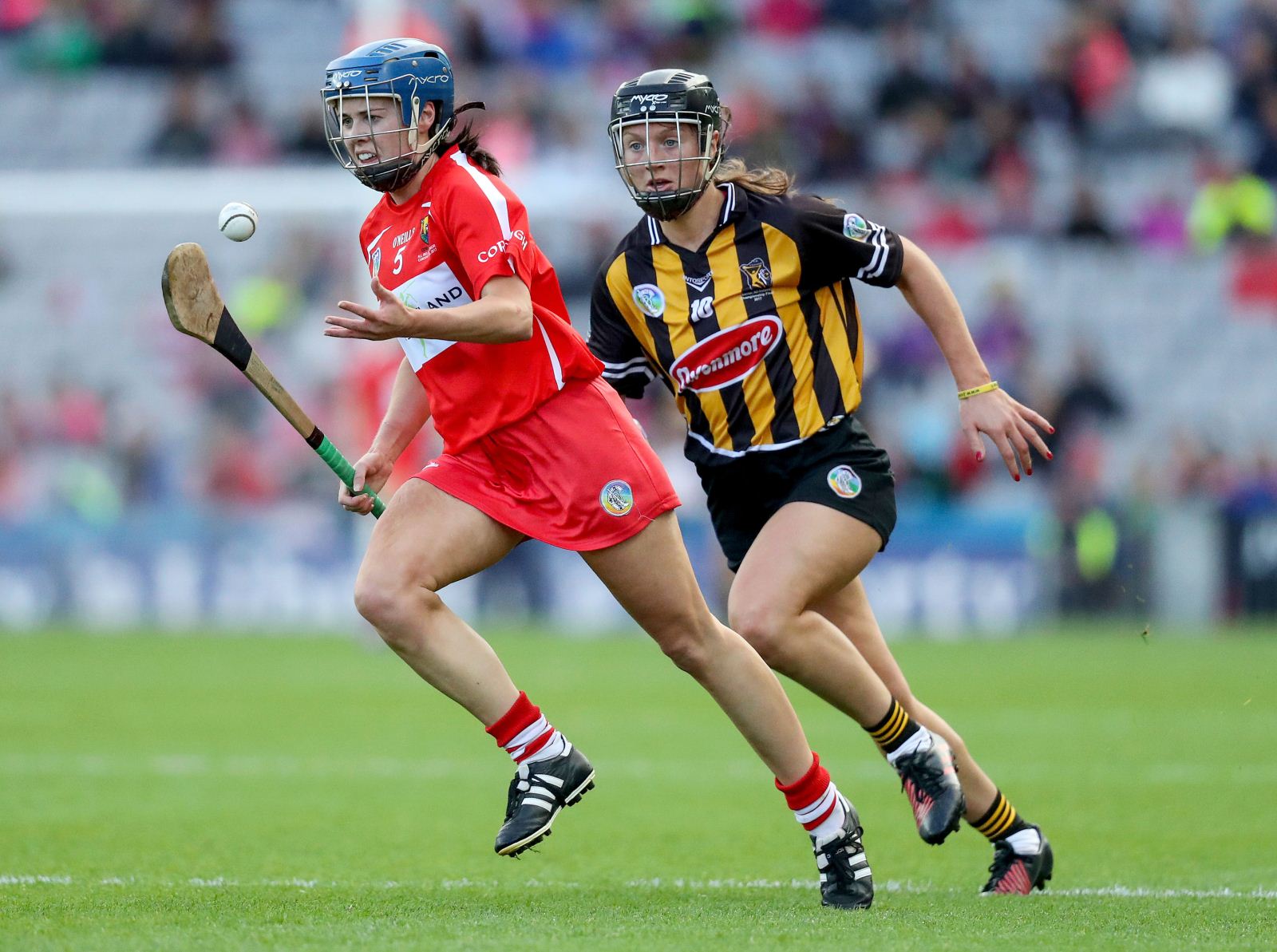 Eimear O'Sullivan (Cork) gets away from Michelle Quilty (Kilkenny)
Eva Marie Elliott (Dublin) – The young Naomh Unison defender was one of the stand out players this year for the girls in blue as they made a significant impact on this year’s Championship. It is a first All-Stars nomination for the left hander who played a crucial role in the heart of the Dublin half-back line this year. 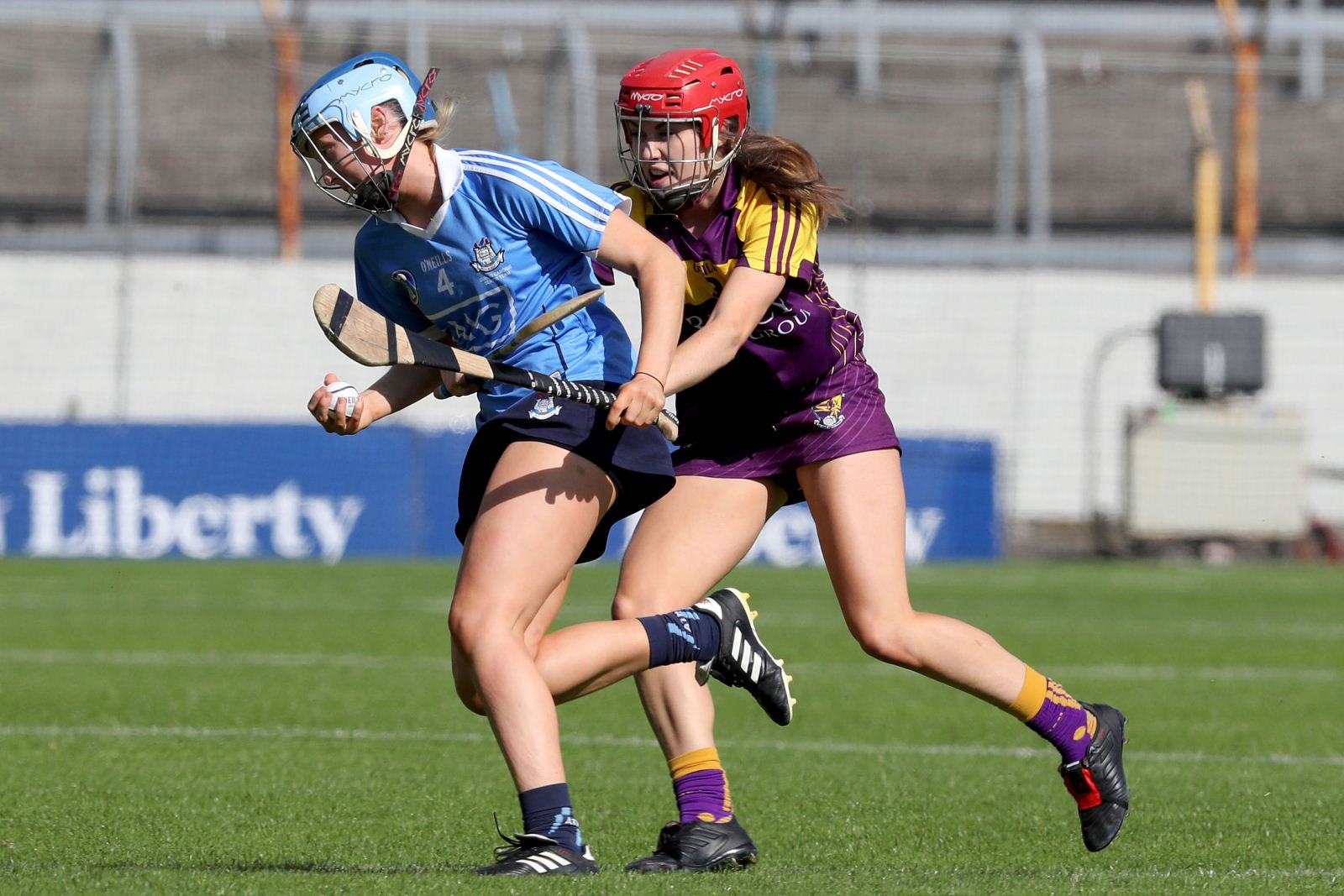 Eva Marie Elliott (Dublin) breaks the tackle from Amy Cardiff (Wexford)
Hannah Hegarty (Dublin) – One of the youngest players nominated for an All-Stars award Hegarty has showed real maturity since making the step from Minor captain into the Senior squad. The St. Judes star is known for being dual player and captained the Dublin Minor Football team the same year as being minor camogie captain. Hegarty is one to watch out for in the near future! 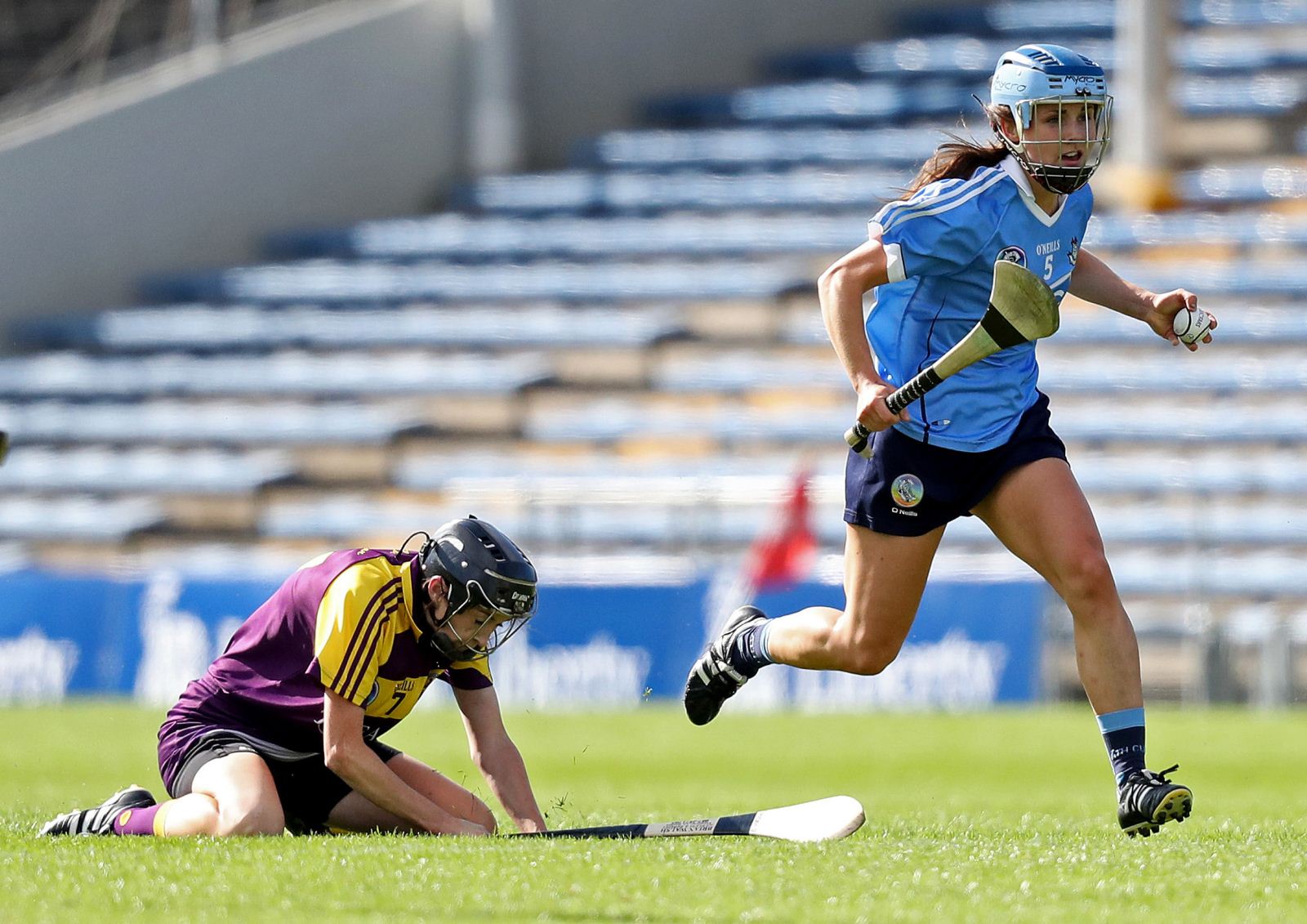 Hannah Hegarty in action v Wexford
Heather Cooney (Galway) – Cooney is in the running for her second All-Stars award having claimed her maiden award back in 2015. The Galway captain made her breakthrough to the senior panel back in 2010 and has been an ever-present figure since. Like her brother Conor, she has experienced climbing the steps of the Hogan Stand back in 2013 and no doubt will be looking to bring back that success in the coming years. 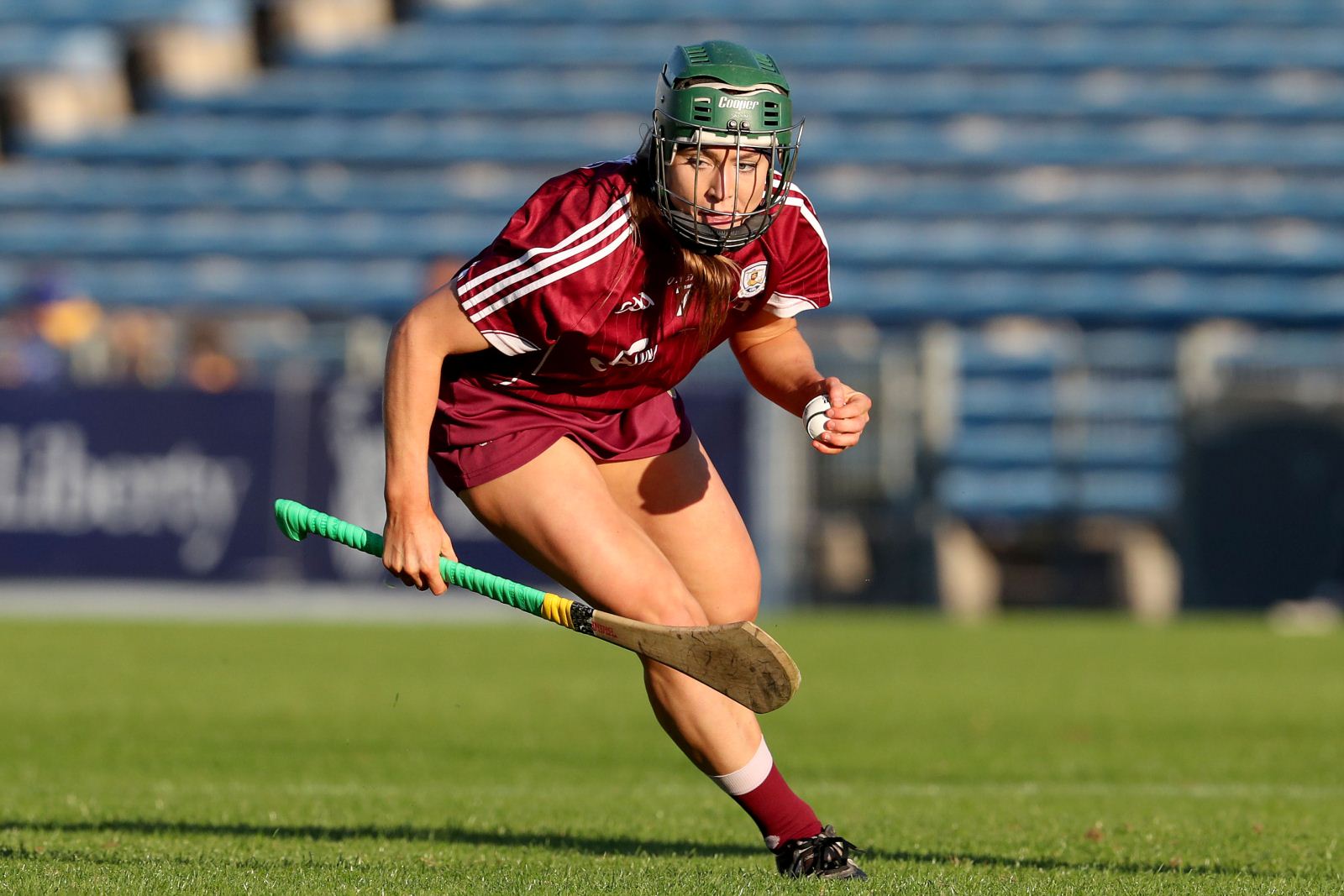 Heather Cooney (Galway)
Anne Dalton (Kilkenny) – A recipient of the prestigious accolade last year Dalton finds herself with another nomination, her eighth in total. Her dominant displays and leadership qualities helped the Cats win Provincial and League honours this year and as a result she has earned a nomination for the Player of the Year. 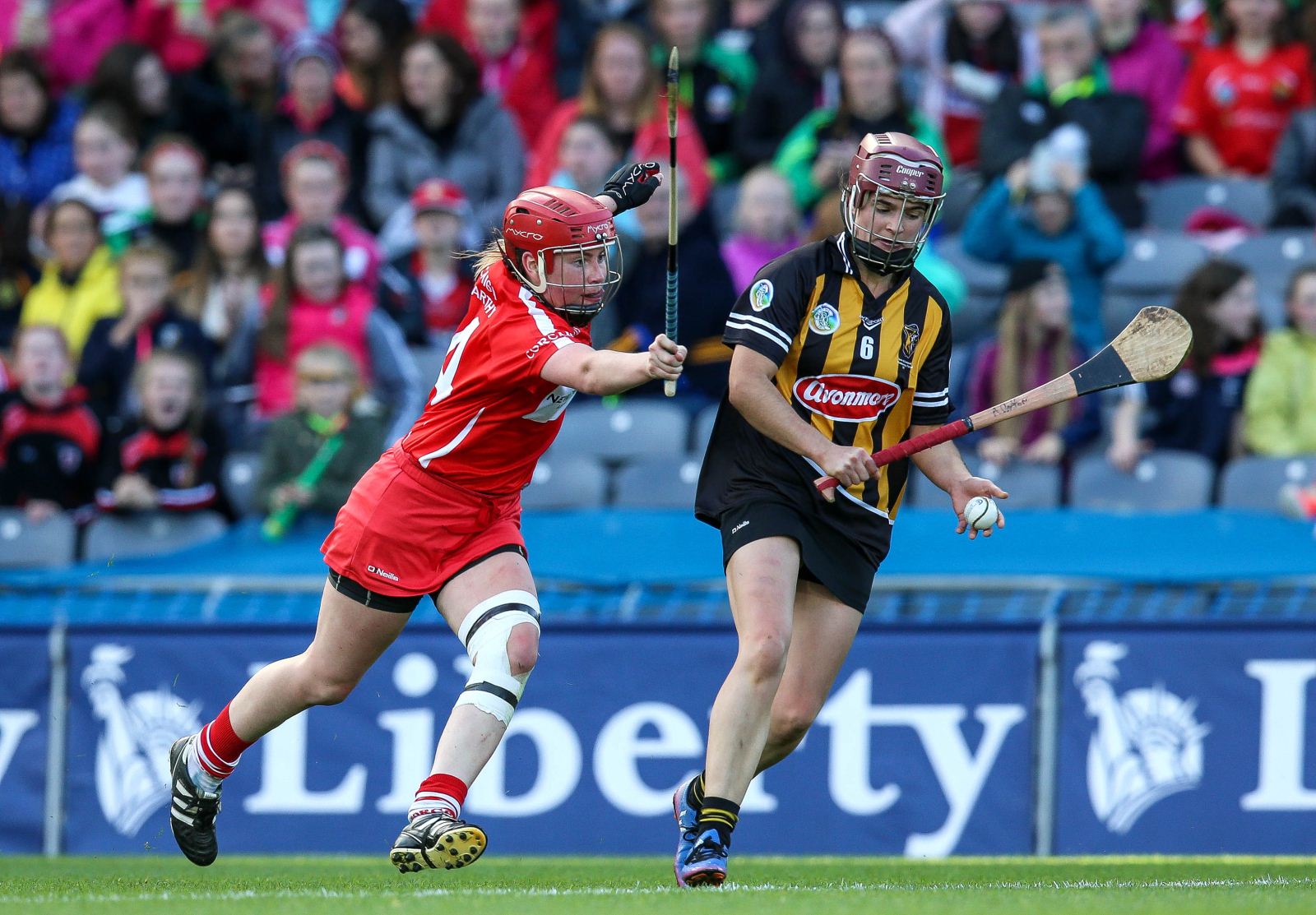 Niamh McCarthy (Cork) with Ann Dalton (Kilkenny)
Brid Gordan (Wexford) – The Wexford captain showed great leadership and determination this year for her county with many impressive performances in both League and Championship. Her reading of the game and discipline in the rear-guard has entitled her to an All-Stars nomination this year. 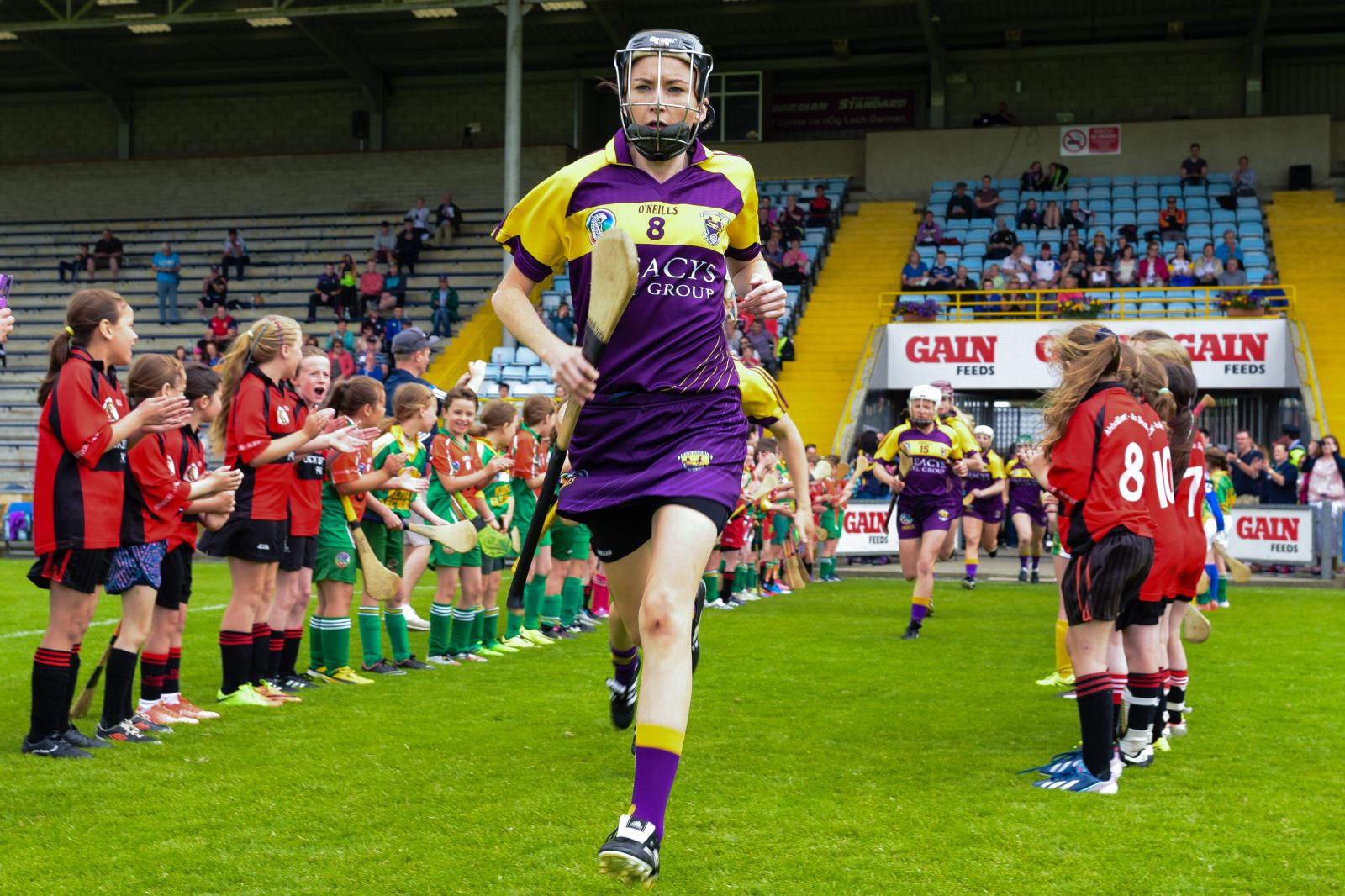 Wexford Captain Brid Gordon leads her team out before the All-Ireland Quarter Final v Dublin
The awards night takes place in the Citywest Hotel on November 4th. If you wish to purchase tickets for the Awards, then please complete and return a Ticket Order Form to info@camogie.ie or contact the Camogie Association on 01 8658658. Tickets are priced at €75 per person with corporate packages also available.