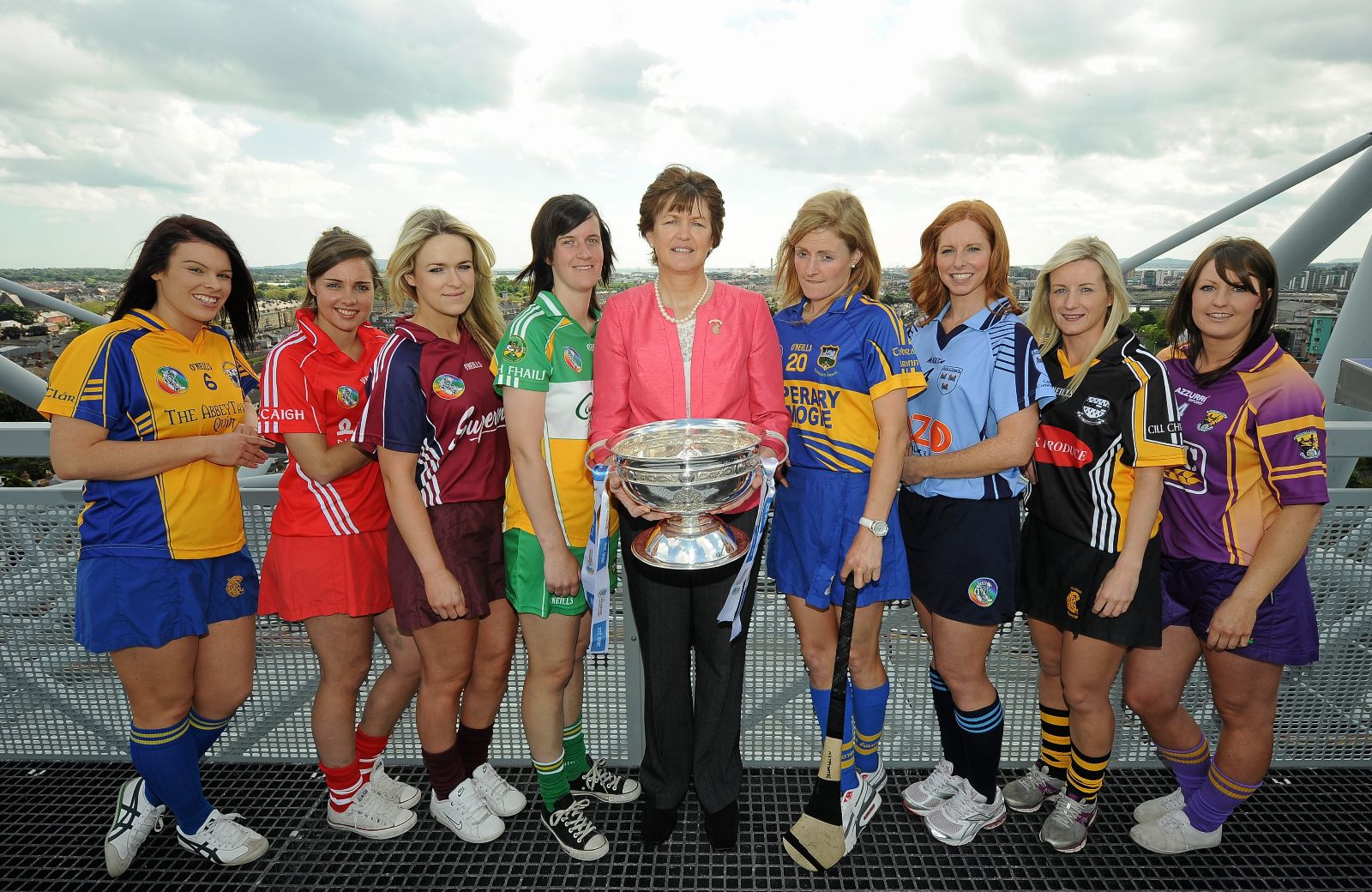 Camogie President Aileen Lawlor has said that new playing rules and the addition of quarter-final rounds will significantly enhance the excitement and quality of this year’s camogie championship.

Speaking at the launch (Tuesday, June 19th) in association with RTE Sport at Croke Park, she highlighted the importance of the new rules:

"There are a number of playing rules that come into force including the reward of two points when a player puts the sliothar over the bar direct from a sideline cut. This is one of the more difficult skills of the game and the new rule rewards the players who can achieve it. It also ensures that coaches and players place an emphasis on perfecting this particular skill, in turn retaining its position as one of the sublime skills of camogie and also adding enormously to the game, for players and fans alike.

We have also focused on ensuring that discipline remains a key priority for players and management during this year’s championship.  The rules help to ensure that sporting conduct is to the fore in camogie at all times."

In her first year as President of the Camogie Association, Aileen Lawlor, highlighted the addition of quarter-finals to this year’s senior grade as an excellent development.

"The round-robin format is still in play but we have introduced seeding in the two senior groups, with the top two teams through to the semi-finals and the remaining runners up playing in a series of qualifiers and quarter-finals before drawing to play in the semi-final stages in Nowlan Park on August 18th."

"RTE Sport are delighted to continue our association with one of Ireland’s leading female sports organisations and we are looking forward to broadcasting our national game across an array of platforms including radio, TV and online."

This year’s championship will feature extensively across RTE Sport with live updates from selected venues each Saturday on RTE Radio 1 Saturday Sport and highlights coverage each week on RTE’s The Sunday Game. The All Ireland Senior & Intermediate Finals will be broadcast live on RTE The Sunday Game and on RTE Radio 1 while this year’s semi-finals will be broadcast live on RTE.ie.

Wexford are the current All Ireland champions and are bidding for three-in-a-row All Ireland titles.This year’s senior championship throws in on Saturday June 23rd. Dublin play Kilkenny at O’ Toole Park, Crumlin at 1:00; Clare face Cork in Newmarket on Fergus at 1:30; Offaly take on Galway in Banagher at 2:30 and Tipperary take on All Ireland champions Wexford in The Ragg at 3:15pm.

This year’s eight senior captains and Camogie President Aileen Lawlor on the view from the top of Croke Park and championship 2012
Reaching for the sky
More videos to follow at camogie.ie and facebook.com/CamogieAssociation 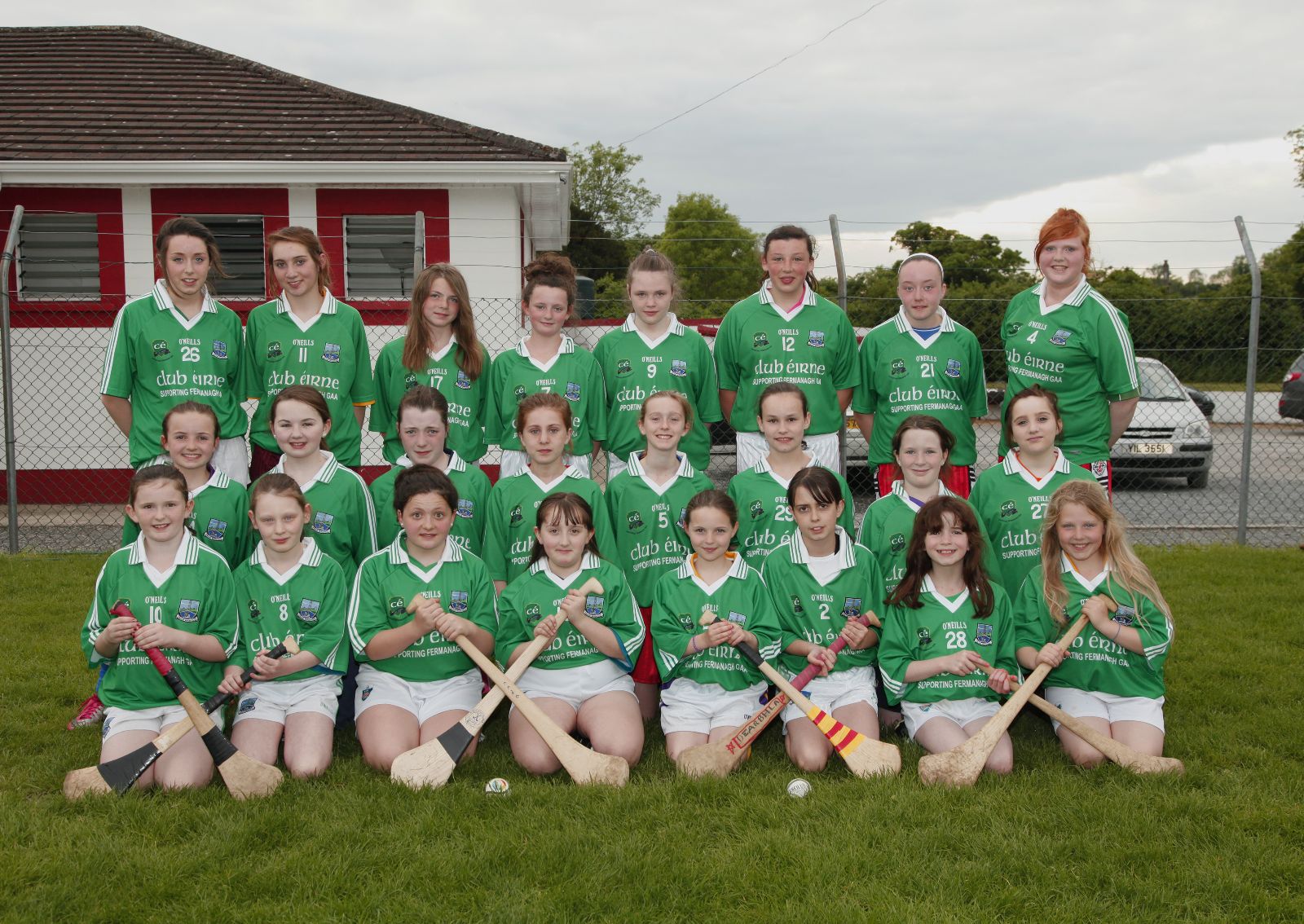 This year a Fermanagh Camogie squad will participate in the national Feile na nGael competition marking an historic first for the prestigious competition. The Fermanagh team is comprised of girls from all across the county. It is a huge achievement for Fermanagh to be represented in this competition marking the massive strides Camogie has made in the county allied with strong support from Fermanagh GAA. Recently 6 primary school Hurling and Camogie blitzes were run in Fermanagh with over 500 children participating.

This has provided a major boost to Camogie Development in Fermanagh and has helped greatly in the squad’s preparation for Feile. Credit must be given to the enthusiasm of the hard working backroom team who have put such a fantastic squad of players together for the Feile weekend, they are: Estelle Carey, Martina McCusker, Paulinus Leonard, Mick Shine, Robert Rainey, Martin Brady and Emmet Conlon. The girls are all looking forward to their first competitive outing in Dublin on the 5th, 6th and 7th of July and are excited with the opportunity to showcase their talents to the rest of the country.

This year Feile na nGael will take place in Dublin on the 5th, 6th and 7th of July. Over the three days Camogie, Hurling and Handball will be played in various locations around the capital with the finals being held in Croke Park and Parnell Park. During the month of May over one hundred National schools were visited in Dublin to launch and promote the Feile na nGael competition. The lucky schools were visited by President of the GAA Liam O Neill, President of the Camogie Association Aileen Lawlor as well as Dublin Senior Camogie and Hurling players. The official launch of Feile na nGael took place in Parnell Park on 24th of May. 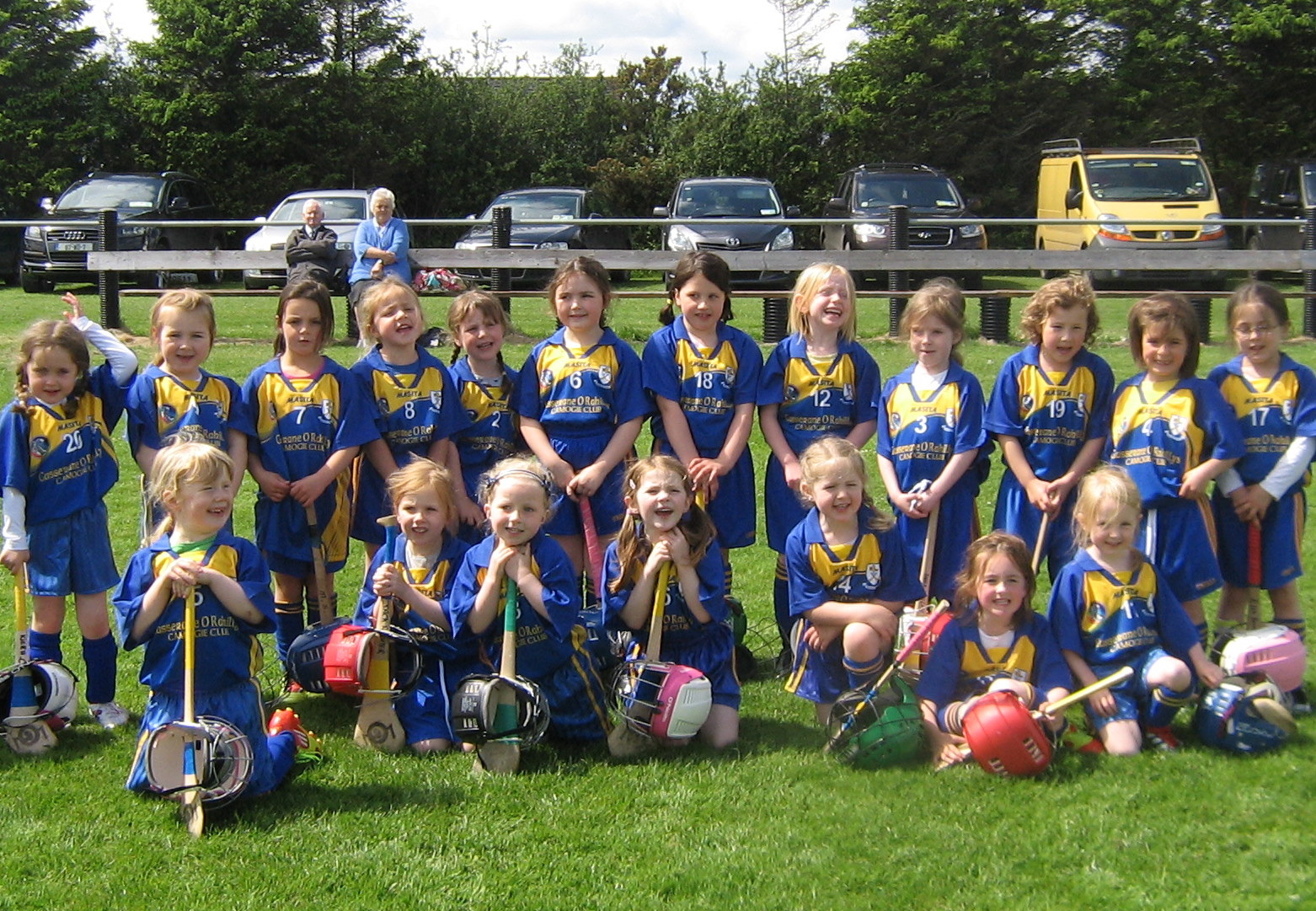 Pictured above: Wexford camogie’s newest team; the Gusserane U8 Camogie team
The official launch of the 36th camogie club in Wexford, Gusserane Camogie Club took place on Bank Holiday Monday (June 4th) attended by Wexford Senior manager JJ Doyle, along with Wexford and Minor inter-county players Amy Dillon, Joanne Dillon, Mairead Moran, Mary Cummins, Pamela Fitzharris and Wexford County PRO Barbara Ryan.  County Development Officer Noel Wilson and Eilish Whitty of Rathgarogue/Cushinstown carried out coaching sessions in the morning with over 100 girls from the U6 & U8 groups while Elaine Morris (Marshalstown) and Ciara Wilson (St Martins) put the girls through a range of drills that were put to good use later that afternoon in a highly entertaining and well organised blitz. Neighbouring teams, Fethard, Rathgarogue/Cushinstown and Bannow/Ballymitty played the newly formed club and despite only four weeks coaching, the Gusserane girls deployed their new found skills with a fantastic level of expertise much to the delight of the large attendance. An acknowledgement must also be made of the club’s hardworking Coiste na nOg while each child availed of a medal and goody bag at the end of a very enjoyable day.

Students from the American College Dublin took part in their first ever Camogie session recently in Herbert Park in Ballsbridge. During their stay the American College hold a variety of sporting sessions for the students so that they can try out the different sports that are played here. The students are from New York, Maryland, Pennsylvania, New Jersey, Massachusetts, Seattle (Washington State) & Texas. The students will hopefully bring back their skill and knowledge of camogie to their respective Camogie clubs in America.

The Camogie Association and the Ladies Football Association in conjunction with the GAA and the Education Centre Tralee are holding a primary teacher in-service course from Monday 2nd July to Friday 6th July in St. Oliver’s Primary School, Killarney from 9.30am to 2.00pm. The course will focus on aiding teachers in coaching the fundamental skills of Gaelic Games in primary schools to mixed ability class groups. A background in Gaelic Games coaching is not necessary – interest and enthusiasm are the only requirements!

Camogie Goes to the Dogs
Camogie goes to the Dogs will take place on Saturday, September 15th in Shelbourne Race Track. Keep up to date on www.camogie.ie for details. Start planning your weekend now as the Kilmacud 7s, All Ireland U14 Blitz and of course the All Ireland Camogie Finals take place on the weekend of September 15th & 16th.
Golf 2012
The 3rd annual Camogie Association Golf Classic in association with MMI.ie will take place at Castleknock Golf Club on Wednesday, September 26th. Tee off times from 9.30am to 2.20pm. Teams of four, (mixed) are invited to attend at a cost of €260 which includes lunch, goody bag and golf at the superb Castleknock course. The competition is in a four ball format with two scores to count. First prize for each member of this year’s winning team is a complimentary weekend break in The Croke Park Hotel – two nights Bed & Breakfast on a weekend of your choice, with dinner for two on one night. There will also be prizes for second and third placed teams and for longest drive and nearest the pin.  So dust down those clubs and book your place now! Go to www.camogie.ie to download booking forms