Latest
Training has commenced for the annual legends tournament! Camogie’s Original All stars will take to the field soon.
Picture above is of the 1996 All Ireland Camogie final between Cork and Galway. Martina Harkin (Galway) and Mags Finn (Cork).
Martina and Mags will renew the rivalry of 1996 in this years Legends tournament!
This is the 4th year of the Legends 7 a side tournament. The tournament will take place on Saturday the 1st March to coincide with the AIB All Ireland Club finals on Sunday 2nd March. It will take place this year in St.Brigids GAA club Blanchardstown Dublin.
Panels can have 12 players for the competition with unlimited substitution on the day. Ten of each teams players must be aged 35 and over and be retired 3 years from inter-county. Each panel can include 2 players that are aged 33 years and over who are retired 3 years from inter-county activity.
Counties that are taking part in the legends this year include Tipperary, Down, Galway, Cork, Offaly and Dublin. Start time is 11am on the day. For more information on the tournament please contact Caroline Murray on 087 1251269 or on cmurray@camogie.ie
The winners of the Legends 7’s 2013 will be presented with the Biddy Phillips cup and medals. The cup was named in honour of Biddy Phillips from Tipperary who was a national camogie referee and administrator who passed away on July 6th 2010. Biddy managed Tipperary to their first Senior Camogie All Ireland title in 1999.
We asked Kathleen Costine of Cork and Martina Harkin of Galway some questions in the lead up to the legends event! Both ladies played also played against each other in the All Ireland final of 1996.
Interview with Legend Kathleen Costine, County Cork
Miriam Deasy because she covered North, South, East & West on the pitch for us in this competition last year!
Angela Downey because let’s face it she was the best!
Captaining Cork Minors to All-Ireland victory (don’t remember the date!!)
My sister Marie. She pushed & bribed us!! I wouldn’t have won anything without her!
Now that you’ve got No. 1 position, keep it!
I’d train harder!
Milford, without a doubt!
Interview with Legend Martina Harkin from County Galway
1. Favourite Legend from your own county playing this year and why?
Sharon Glynn or "shazza" as she is known at home. Great advocate for what’s good about camogie. Great friend and advisor on and off the field!!! TRUE legend
2.Who stands out as the toughest opponent of your career
I thought they were all tough!!
3.Favourite Camogie memory?
Winning both the senior All Ireland and senior club in the one year 1996 and going on to win 4 more club All Irelands with Pearses club.
4.Who was the biggest influence on your sporting career?
My parents for encouraging me and the late Mike Kennedy for showing me all that’s great about camogie..
5.What is the best advice you ever got?
No regrets and No excuses
6.If you were just starting out again as an inter county player what is the one thing you would change?
Better player welfare, more media coverage and keep to basics. It’s a simple game you know!
7.Who do you think will win the AIB Camogie Senior club final?
Ardrahan I hope. It’s a big ask but luck has been with them so far so fingers crossed O Carroll will be coming West! 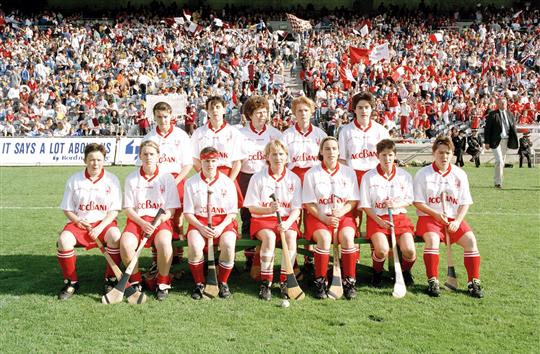 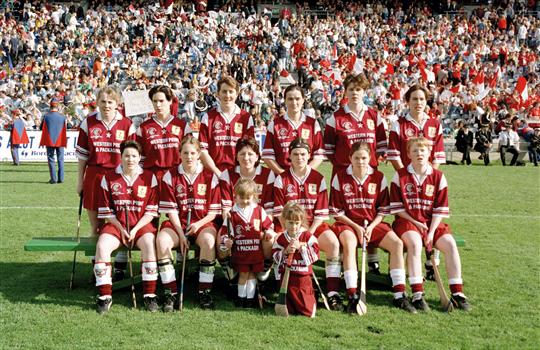