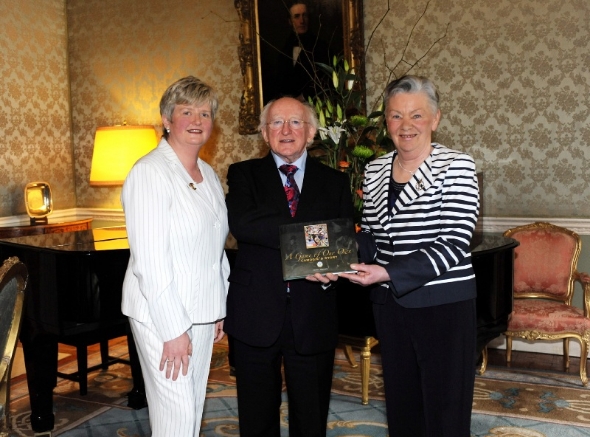 A Game of Our Own: Camogie’s Story presented at Aras an Uachtarain

The President of the Camogie Association Joan O’Flynn was part of a delegation which visited Áras an Uachtaráin on Friday, March 16th to present a copy of A Game of Our Own: Camogie’s Story to President Michael D. Higgins.

A Game of Our Own: Camogie’s Story was officially launched by the Camogie Association at Croke Park on December 15th 2011. The book charts the development of the Association from its foundation in 1904 through to the present day. It contains a rich array of photographs and fantastic archival material, stretching back over many decades.

The book will be officially launched by Connacht Camogie Council in Claregalway on March 23rd with special guest Professor Gearoid O’ Tuathaigh. A Mayoral Reception is also taking place in Cork City Hall on March 29th at which the Minister of State for Disability, Equality, Mental Health and Older People, Kathleen Lynch will attend.

Julie Watchorn-Brennan was inspired to take up camogie by her father, Jim Watchorn, a former hurler from Kilkenny. And now, daughter Maisy is following in the footsteps of Mum & Grandfather! The three generations took part in Birmingham’s St Patrick’s parade on Sunday, which had a sporting theme to celebrate the London 2012 Olympics. It was led by flag bearers from organisations such as the Gaelic Athletics Association in Birmingham, Birmingham Irish Rugby Club and Erin Go Bragh Hurling and Camogie teams.

Kilkenny woman Jane McEvoy will be appearing on screens soon in the latest series of the BBC’s The Apprentice, hosted by Alan Sugar. She will be competing against 15 other hopefuls to secure the prize of a £250,000 investment. McEvoy’s biography on the BBC site states that she played hockey for Leinster and camogie for Kilkenny. McEvoy and her husband run a food company in Tipperary called McEvoy Foods

Launch of Mum & Me in Down

In the splendid facilities at St John’s GAC, mums and dads enjoyed a great afternoon’s fun getting to grips with the fundamental techniques of camogie skills. Mum & Me is an initiative for parents who wish to learn and enjoy the skills of camogie with their children. Participants on Sunday’s course got ‘hands on’ experience to learn the vital terms commonly used in the coaching of the game; the parts of the caman; and the techniques of six basic skills of camogie along with drills and games to guarantee fun.

The attendees also got the opportunity to discuss how the programme could be successfully run in their own clubs which will have a range of benefits at all levels for the club and community. Thanks to Teresa Allen and Bonnie McGreevy, County representatives from the Ulster Coaching & Development Committee who facilitated the course and also to St John’s GAC for hosting the course.

Keep up to date with all of the happenings in Camogie by ‘liking’ our Facebook page
www.facebook.com/CamogieAssociation

Spread the word by asking all of your friends to like our page too!

The Irish Daily Star Leagues are in full swing. Keep up to date with all of the match results and reports with a dedicated player interview each Saturday in the Irish Daily Star while a full wrap up of the weekend is available in the Monday edition.

Dates for the Diary

The Camogie Association along with the Laois Camogie County Board are hosting a Puc Around Laois Camogie Day on Saturday 28th April in ALL Camogie clubs throughout Laois from 11am to 1pm. This event is open to all Laois Camogie clubs for any girl up to the age of twelve that wishes to Come and Try the game of Camogie. There will be an array of activities occurring in all of the clubs including a display of camogie skills, special guests, go games, blitzes, coaching and fun games for all the family. Anyone wishing to try out our game is welcome to attend, bring along your friends and family.

The Clubs hosting a Camogie Puc Around Open Day are listed below.

If you wish to try out Camogie in a fun and safe environment please feel free to attend the Puc Around Day in your nearest club, all equipment will be supplied to newcomers on the day. Bring your friends and your family, join in and help showcase our wonderful game of Camogie.

Presenters on the day included: 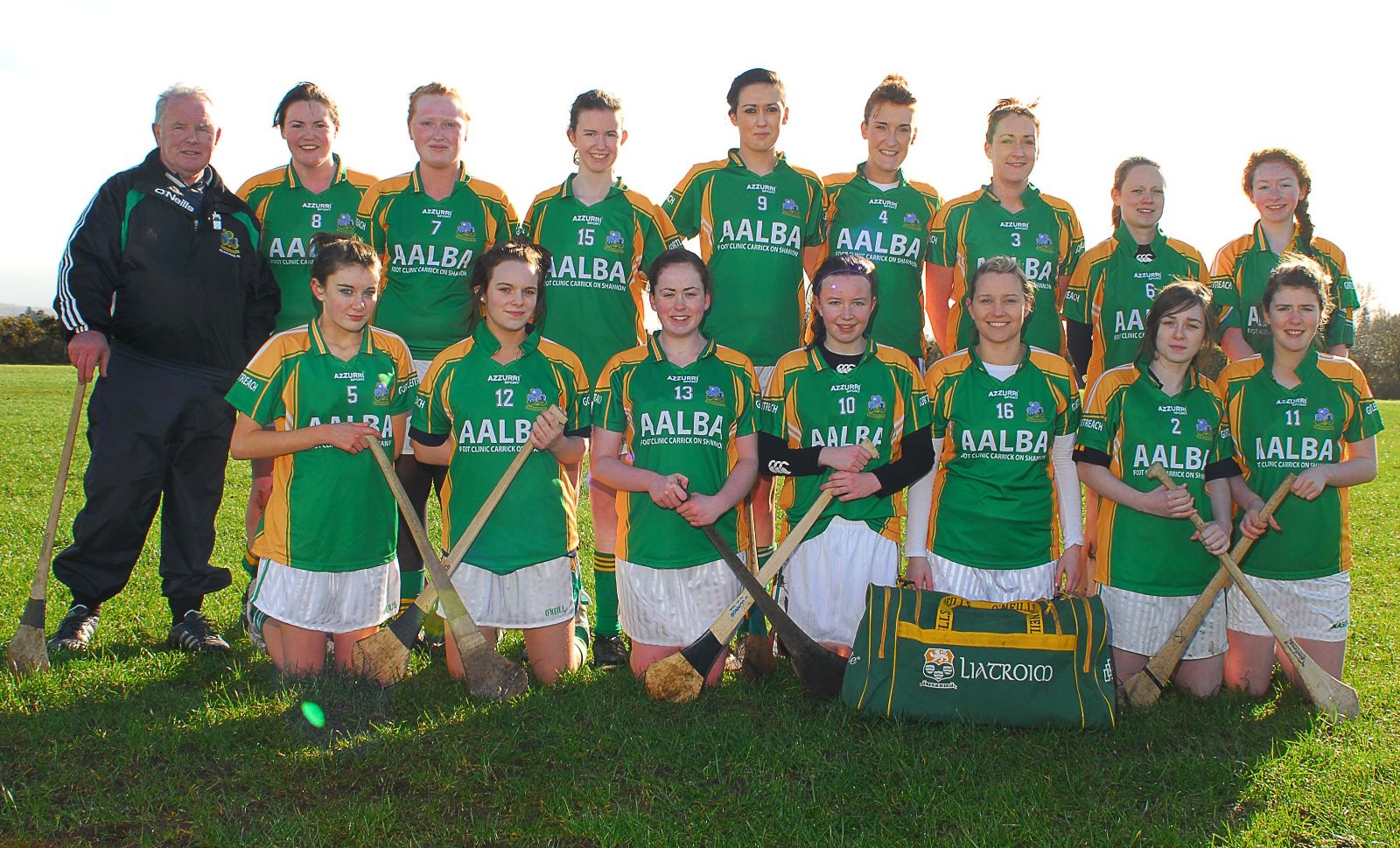 The Camogie Association celebrated a bumper weekend at the All Ireland Club Finals. On Saturday afternoon St Judes played host to the Legends tournament with Cork running out winners and claiming the Biddy Phillips Cup after a titanic struggle against Tipperary in this year’s well- attended final. Gortletteragh Camogie Club and Clanmaurice of Kerry made their competitive debut before an appreciative audience at the Legends tournament on Saturday afternoon. The club which was formed following a number of Camogie taster sessions in the Gortletteragh area in November of last year, has made huge strides in the past number of months. Following their competitive outing the team also attended the All Ireland Club Finals on Sunday afternoon.

Back to off field action, the presentation of the Camogie Association & RTÉ Mick Dunne Awards took place on Saturday night at Croke Park stadium as the 2011 recipients were presented with their awards. The 2011 RTÉ Mick Dunne Memorial Awards recipients are: PRO of the Year, Bríd McNamara (Clare); Photograph of the Year Professional Category, Caroline Quinn; Photograph of the Year Amateur Category, John Merry (Armagh); Published Work Cavan Camogie Board, A History of Cavan Camogie 1909 -2009. 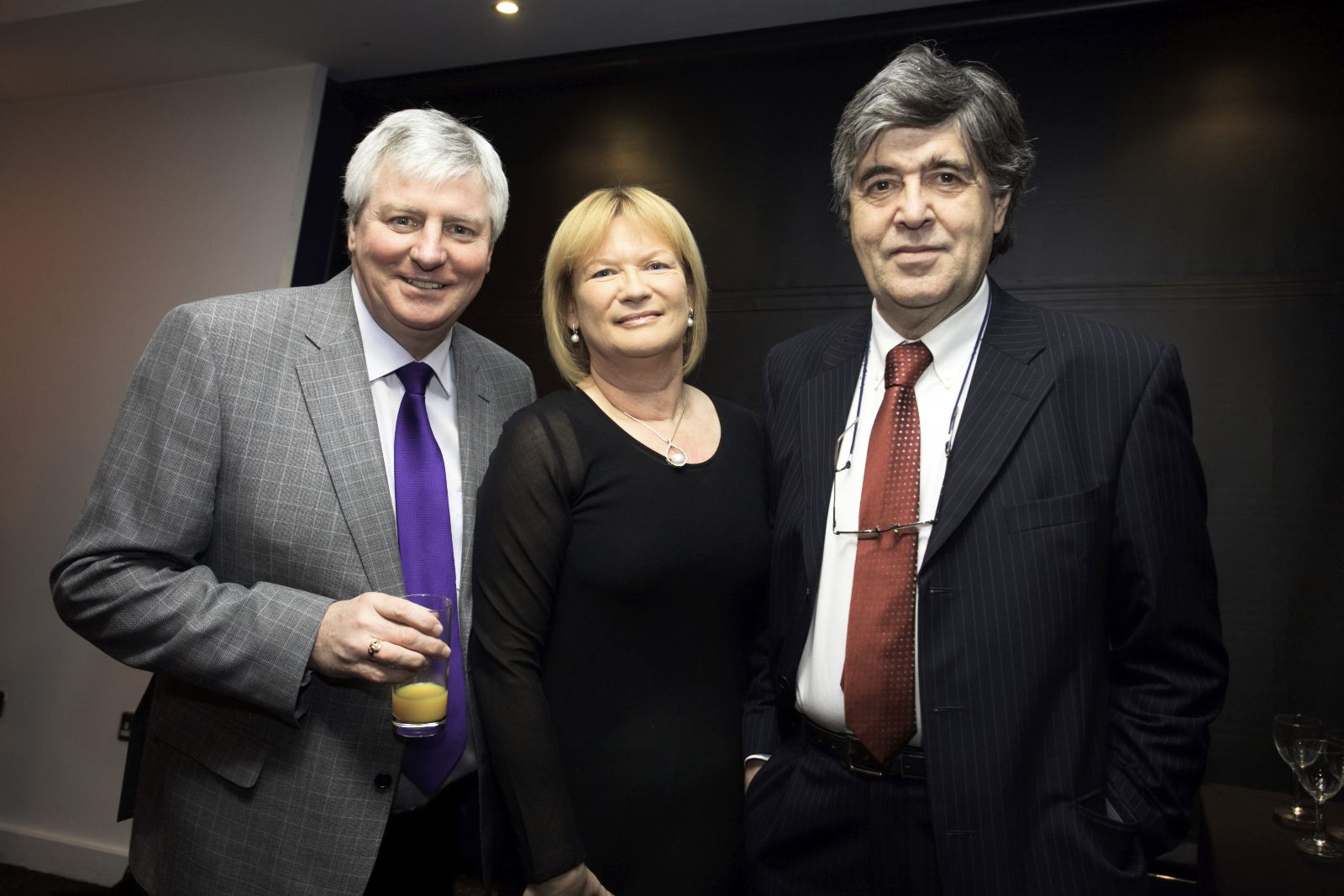 The 2011 Camogie Association Media Awards recipients are: Match Programme, Armagh Camogie Board; Local Radio Station, WLRFM (Waterford Local Radio); Provincial Newspaper, Roscommon Herald; Website, Dublin Camogie Board. On Sunday afternoon, the Volunteers of the Year were honoured at a lunch preceding the All Ireland Club Finals. Each recipient had been nominated by their county as a person who had made an outstanding contribution to Camogie. Then the focus shifted to the on field action as Eoghan Rua of Derry saw off the stiff challenge of Ardrahan while Oulart the Ballagh captured an elusive Club All Ireland title at the expense of Drom & Inch.

Finally, a special thanks to this year’s Mini Games participants: Eoghan Rua, Ardrahan, Oulart the Ballagh and Drom & Inch. While a huge congratulations to Scoil Mhuire Community School, Clane and Presentation Secondary School, Thurles on their Caman & Run titles.

On Friday February 17th, coaches and co-ordinators of County U14 & U15 Schools of Excellence and Development Squads attended an Information Evening in Mallow GAA Club. Aoife Lane, Lecturer in Exercise and Health Studies in Waterford Institute of Technology delivered an excellent presentation on ‘Dealing with and Motivating the Teenage Camogie Player’. Fiona O’Driscoll, former Cork Camogie Manager & holder of 6 Senior Camogie All Irelands took a practical session on the various Drills, Games & Techniques in relation to Coaching the Tackle.

Each club in attendance received an Information Pack and a Club Development Planning Questionnaire which should be returned to Tipperary Development Officer Pat Sheridan by March 30th.

On Feb 22nd Director of Camogie Development Mary O’Connor delivered an excellent Drills Galore Workshop which focussed on the Teenage Player in Doora/Barefield GAA Club. A similar Workshop for coaches in South Tipperary was held in Cashel GAA Club and delivered by Munster RDO Deirdre Murphy. Both evenings were very well attended and enhanced by the excellent facilities and hospitality of the host clubs.

Workshops for coaches of players aged 4-9 years old were held recently in Corofin & Tulla, Clare by Munster RDO Deirdre Murphy. These workshops focussed on developing childrens’ fundamental motor movements and skills through fun games and drills as well as tips and techniques for coaching the basic skills of the game of camogie.

All coaches received copies of the Camogie Player Pathway and handouts on the workshop content as they prepare to hit the playing fields with their eager young charges.