McGrath major makes it day to remember for Galway

McGrath major makes it day to remember for Galway

On the day that the first Galway team to ever win the O’Duffy Cup was honoured, the Tribeswomen returned to the top of the tree for the fourth time, when just outstaying the same opposition 1-15 to 1-12, that fell victim to the county’s trailblazers in 1996.

It was Siobhán McGrath, (pictured above left celebrating with player of the match Aoife Donohue), who scored the crucial goal when Sarsfields ended Slaughtneil’s dominance as All-Ireland club champions in 2020 and the flying forward came up with the defining major once again.

It came as Galway rescued what looked a perilous situation when Katrina Mackey sent a thunderbolt to the roof of their net in the 49th minute.

That made it 1-11 to 0-11 but from that juncture forward, Galway outscored the Munster crew by 1-4 to 0-1 and when one considers that they began the game with four points inside minutes, it was those bursts that proved definitive.

Cathal Murray’s side had already reduced the margin to one when McGrath finished delicately beyond the advancing Amy Lee in the 56th minute, after the excellent Ailish O’Reilly had broken the line and provided the consummate pass.

Orla Cronin, who was magnificent after being cleared to play in the early hours of the morning by the DRA, made it a one-point game but as Cork poured forward, Galway forced some huge turnovers and capitalised on the space, McGrath’s sister Orlaith hitting two big points to ensure it was Galway’s day.

The availability or otherwise of Cronin dominated the build-up and the Enniskeane playmaker lined out with 26 on her back, skipper and the match winner against Kilkenny, Linda Collins making way.

For their part, Galway brought in Carrie Dolan to make her first appearance since suffering a serious knee injury in the opening round against Westmeath, with Niamh Hanniffy dropping to the bench and Donohue reprising the midfield partnership with Niamh Kilkenny that propelled Cathal Murray’s side to their last All-Ireland in 2019.

It was a game befitting an All-Ireland final with phenomenal quality in terms of physicality, skill and stamina and while it could have gone either way with a different bounce of a ball or the difference of a blocked pass here or there, it was difficult to argue against the eventual result given how Galway had led for most of the affair.

It was a frantic start but Galway had the better of it. Dolan drove over two frees and Siobhán McGrath hit the first of her two opening-period points. O’Reilly cut in from the left to fire over from 40m soon after and it was a dream opening. 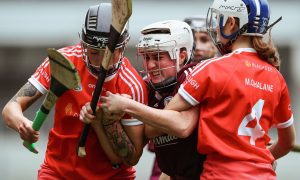 Gradually, Cork chiselled their way back into it, with great thanks to their midfield pairing of Ashling Thompson and Hannah Looney, the latter in particularly taking the battle to the opposition and close to the best player in red throughout the nigh-on 70 minutes.

Thompson ran onto a break from a Lee puckout to get the Rebels off the mark without breaking stride. McGrath replied before Sarah Healy was forced into an tremendous save from Mackey, after Cronin had drawn the cover.

Cronin hit a brilliant score soon after, the first of three consecutive points for Cork, the other two quite superb efforts from Looney.

Galway’s defenders had to make a number of interceptions with the Leesiders creating overlaps, one from Dervla Higgins – herself released to play after being sent off in error in the semi-final – from Amy O’Connor almost assuredly preventing a goal.

O’Connor was looking lively and she clipped a nice point, while Cronin was very evident in general play too, a testament to the strength of her mentality after her week.

Her shooting from placed balls was not so good though and she shot four first-half wides form frees. One was a straightforward attempt to equalise and it was punished as Kilkenny hit the target at the other end.

Scores from Cronin (free) and Mackey, after Cronin had somehow stolen possession, brought Cork level for the first time but an inspirational score by Donohue on the run from wide on the right gave Galway the edge at the break, 0-9 to 0-8.

The third quarter was a real arm wrestle with very little scoring. It wasn’t from the lack of opportunities – there were plenty – but both sets of defences shone, Libby Coppinger and Shauna Healy just two that came up with some massive plays. And when it was necessary to take a yellow card, they did that too.

Cronin punished a foul on O’Connor and repeated that trick after Dolan had slotted from a free to leave a point between them at the water break, 0-11 to 0-10, though it had taken a miraculous block from Looney to deny Dolan a goal just before that.

Cronin arced over a beauty from the right, after excellent work by the tireless Saoirse McCarthy and the teams were level.

Collins had been introduced five minutes after the restart and was again a reliable outlet with her assured handling. The captain came up with a massive play to set up Mackey’s goal, winning a ball she had no right to, carrying and then delivering the perfectly weighted handpass.

Mackey still had a bit to do coming in from the right but the Douglas forward unleashed a howitzer that gave Sarah Healy absolutely no chance.

Croke Park shook but crucially, Galway did not. Dolan converted a free with her last act of the game before being withdrawn, having made a vital contribution after so long on the treatment table, and O’Reilly took over the placed ball duties, just finding the inside side of the post soon after.

And it was the Oranmore-Maree attacker who provided the vital assist for the match-deciding score, giving McGrath that split-second she needed to transfer sliotar to hurley to angle a shot to the net.

Cork had contributed splendidly to a wonderful occasion, and surely one of the highest-standard finals in the history of camogie.

But it was Galway who took the spoils.