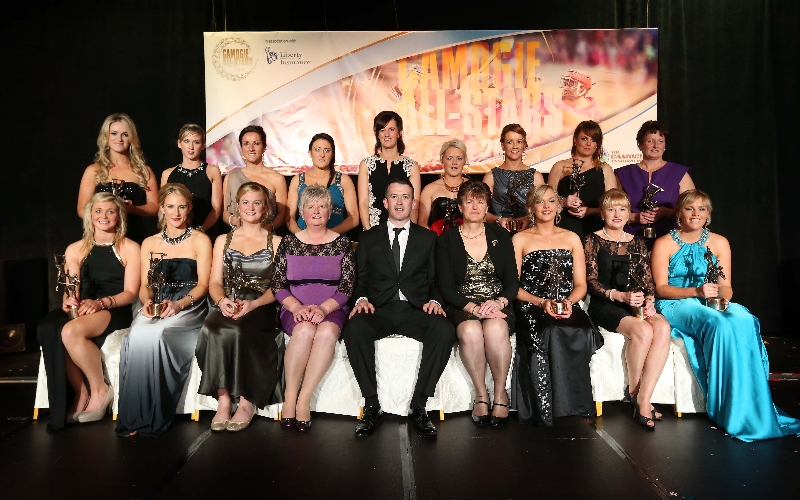 Galway and Kilkenny dominate the 2013 Camogie All Star team

Galway Manager Tony Ward received the Manager of the Year award having led Galway to two All Ireland titles (Senior & Intermediate) in September.

Kilkenny’s Mairead Power and Edwina Keane in defence and wing and corner forwards Katie Power and Shelly Farrell represented the 2013 finalists in this season’s line-up.

Offaly’s Elaine Dermody collects her county’s first senior All Star award. The Drumcullen club player has been chosen at full-forward. Chloe Morey of Clare is named at wing-back and collects her first and the county’s second ever award.

Jennifer O’Leary of Cork was presented with her seventh All Star award at midfield. It caps a tremendous career for the midfielder who recently announced her inter-county retirement from Cork. Kate Kelly of Wexford was named at wing forward and also collected her seventh All Star award. Kelly and O’Leary along with Gemma O’Connor of Cork now hold the highest number of All Stars, since their inception in 2004.

Speaking at the event President of the Camogie Association Aileen Lawlor said:

“This year’s awards ceremony capped another fantastic season for the Camogie Association. It is a tremendous honour to present the 10th Annual Camogie All Star awards and the event has grown since its inception in 2004. Next year marks the 110th anniversary of the Association and it will be a fantastic milestone which we are looking forward to celebrating very much throughout the year.

The All Stars are a significant event for the Association and for players and supporters alike as they publicly acknowledge the contributions of individual players based on their performances throughout the year. We are proud to acknowledge the wonderful achievements of these young women, who are strong ambassadors for the game of camogie.

It is a privilege to present the All Star, Soaring Star and Intermediate Soaring Stars and I want to congratulate each and every player this evening, who has been considered for an award and presented with one. I also extend my congratulations to Tony Ward on receiving the Manager of the Year accolade.

Finally, I would like to thank our All Stars associate sponsors Liberty Insurance. This year was the first year of the Liberty Insurance championship and we are looking forward to building even further on that in the years ahead and strengthening our partnership.”

"Liberty Insurance is delighted to be involved in celebrating the 2013 Camogie All Star Awards. Our first year as sponsor of the Senior, Intermediate and Junior Camogie Championships has coincided with one of the most memorable and scintillating seasons in many years, and I'd like to personally congratulate all of the nominees and winners here this evening". 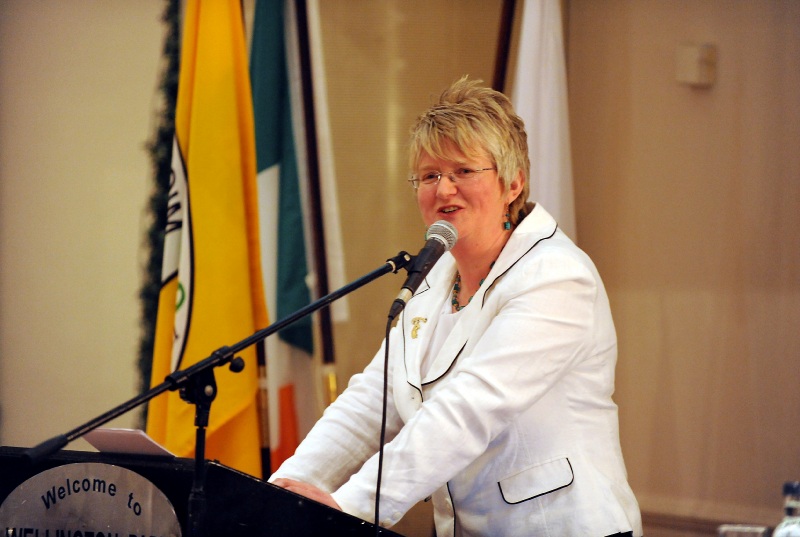 Appointment of Joan O Flynn as CEO of the Camogie Association

Joan O’Flynn has been appointed as the new Ard Stiúrthóír (CEO) of the Camogie Association. The Cork native becomes the Association’s third full-time Ard Stiúrthóír following Sheila Wallace and Sinéad O’Connor. O’Flynn takes over from Mary O’Connor who was Acting Ard Stiúrthóír for the past fifteen months and will now resume her role as Director of Camogie Development.

“We are delighted to confirm the appointment of Joan O’Flynn as our new Ard Stiúrthóir and I look forward to working with her. She has served camogie with distinction over many years and I know she will bring the same passion and energy to her new role. I would also like to thank Mary O’Connor for her great work and commitment for the past year and more.”

Joan O’Flynn is a former President of the Camogie Association. She was educated at St Mary’s Midleton, U.C.C and U.C.D, graduating with a Master’s Degree in Equality Studies. She has previously worked for Combat Poverty and with the Department of Community, Equality and Gaeltacht Affairs. 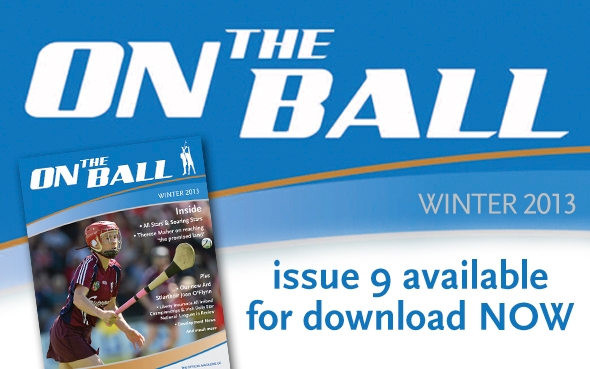 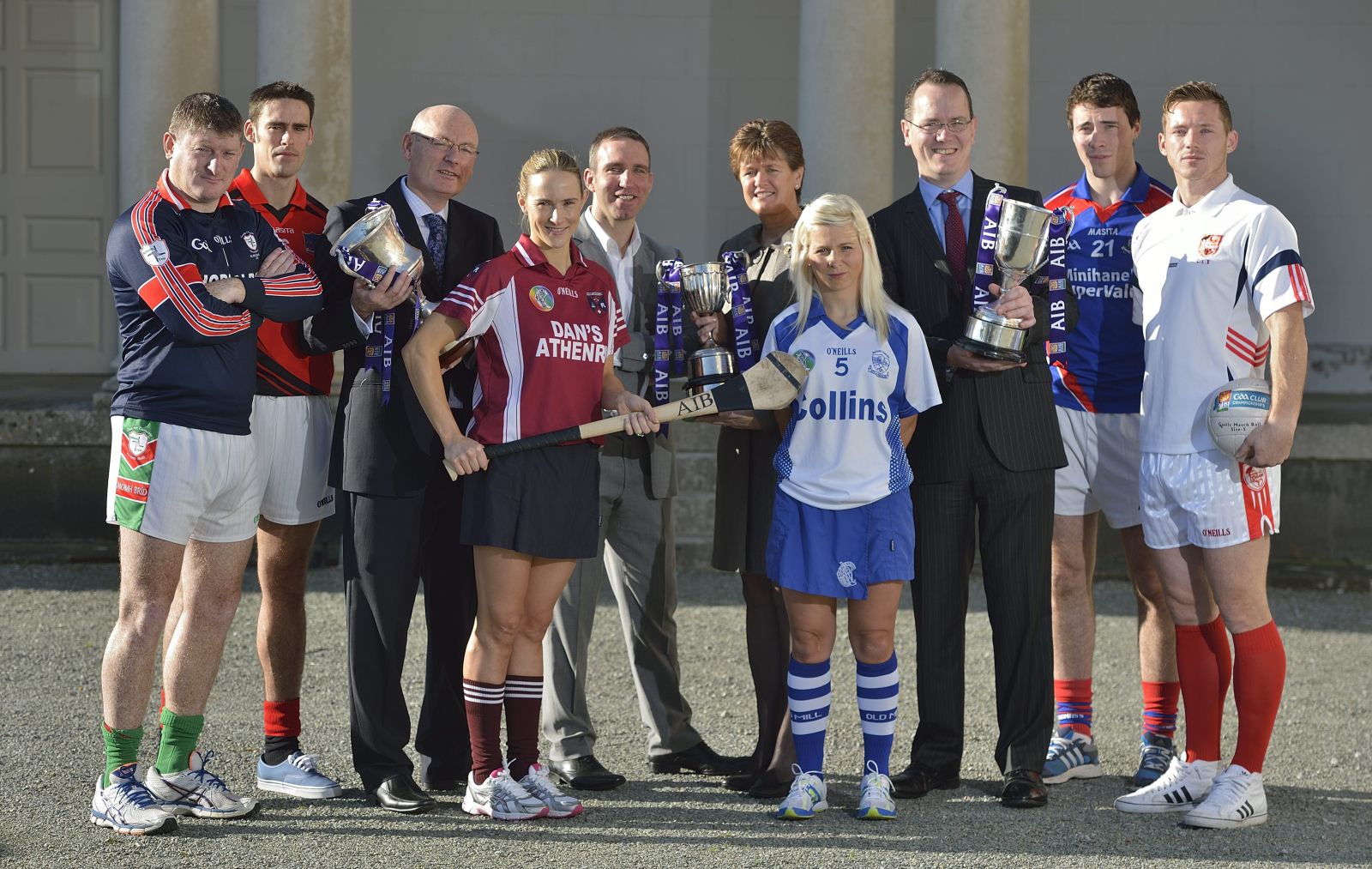 AIB GAA/Camogie Club Championships – The toughest of them all

AIB announces its sponsorship of the Camogie Club Championship
The AIB GAA/Camogie Club Championship launched on Tuesday October 15th is the toughest competition of them all. Clubs are faced with a tough county championship against local rivals; progressing through the Provincial rounds; All-Ireland quarter and semi-finals and ultimately a final in Croke Park. There is no ’back-door’ from the Provincial championships onwards and much of the competition is played in tough conditions over the winter months. It’s the ‘Toughest of them all’. Just ask the players.

“I’ve been lucky enough to win All Ireland title with Milford and the Club Championships presents a very different challenge to playing with your county. Everything starts at the club and it is really difficult to win an All-Ireland title, but it’s an amazing feeling and all the hard work is worth it in the end,” Milford and Cork’s Elaine O’Riordan said.

AIB officially announced its sponsorship of the Camogie Club Championship and Denis O'Callaghan, Head of AIB Branch banking, emphasised the importance of this new partnership: “This year, AIB’s 22nd year partnering with the championships, sees us announce our new sponsorship of the Camogie Club Championships. This sponsorship is very important for AIB as we recognise the proud history of Camogie, one of the most skilful sports in the world and we are looking forward to a successful partnership with The Camogie Association.

“Our sponsorship now includes Senior, Junior & Intermediate Championships across both hurling and football and the new Camogie partnership is a great addition to this portfolio. We are proud to be a partner of the Club Championship as it is one of the most competitive and toughest competitions to win in sport. Everything starts at the club and the passion and commitment from the players and supporters is exceptional and something we are very proud to be associated with.”

President of the Camogie Association, Aileen Lawlor, is looking forward to partnership with AIB:

“The Camogie Association are delighted with the new partnership with AIB who have been proud sponsors of the GAA for 22 years and now are sponsoring the Club All Ireland Camogie Championships.

“Club is the grassroots of our Association – this is where the player is first introduced to Gaelic games. This is where the player develops the love of the game and proudly represents their club, parish and community. AIB cater for families in parishes and communities all over Ireland just as we in The Camogie Association caters for all children from a young age and well into their adult life in the community. We are delighted to announce this partnership, and we look forward to working alongside AIB over the next few years”. 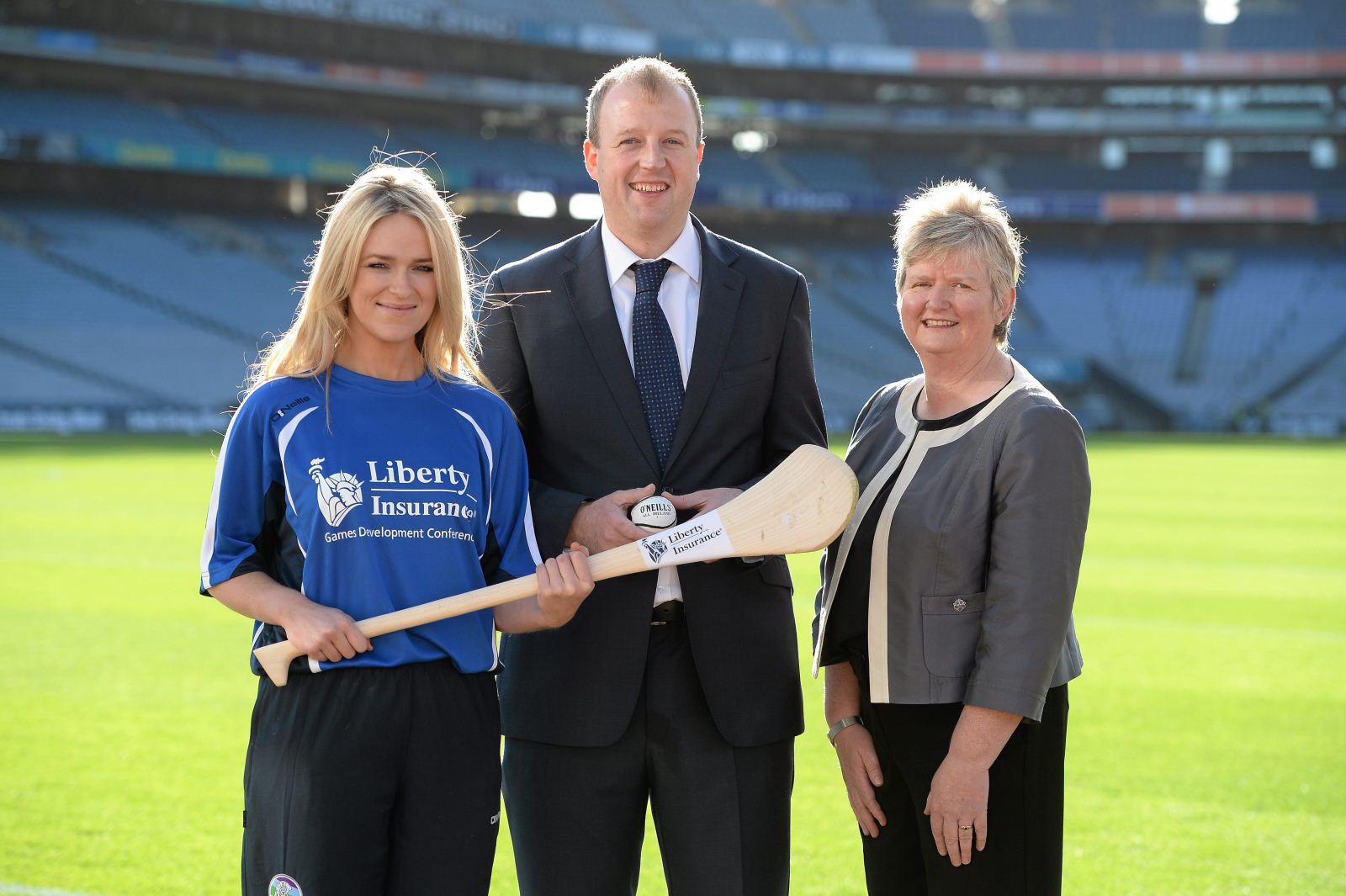 Liberty Insurance was announced as the new title sponsor of the GAA National Games Development Conference. Their support for the annual conference is part of a wider commitment and partnership with the GAA in the areas of coaching and responsible sport.

Some of the top names in Gaelic Games coaching will be involved in the Liberty Insurance GAA’s annual National Games Development Conference – “Inspiring Children: Fostering a Love of Gaelic Games” – which will take place on Friday and Saturday January 11th and 12th, 2014 in Croke Park. This is the 11th annual Conference, and aims to address issues related to the child player that are of most concern and interest to members of the GAA community.

Run as a partnership between all of the Gaelic Games Association, the Conference will offer the 700 delegates attending an opportunity to access talks relating to key coaching issues in hurling/camogie, Gaelic football/Ladies Gaelic football, Handball and Rounders which are specifically related to the child player.

A star studded line up of speakers will feature coaches from the world of Gaelic Games, players, teachers, coaches and international speakers, as well as speakers from all Gaelic games backgrounds, including Eamonn Ryan (Cork Ladies football team), Jody O’ Connor (Clare), Paudie Ó Néill (Dublin) and Joe Brolly (Derry) will present the final key note address at the conference.

“Go Games” which has proved revolutionary in the development of players across all Gaelic games will be a key focus of the Conference. A dedicated forum will discuss the evolution of games and how the Go Games are the ideal opportunity to introduce young players to Gaelic Games.

A special feature of the Conference will be the hosting of the first Games Development Research forum, which will feature a number of the leading young researchers who will present their findings related to Gaelic games. This will form the Friday night session of this two day event.

Launching the Conference, Uachtarán, Liam Ó Néill said: “The GAA Games Development Conference has developed a very loyal following amongst coaches across the Association. It is a must attend event for anyone with an interest in how we promote our activities and the ongoing development of our children.

“In the Irish sporting sphere this event is unrivalled, the range of speakers attending this year underlines the standard we have to come to expect from it year in, year out.

“That it takes on a different focus every year – this Conference focuses on the development of children – adds further to its allure and usefulness and I commend the team charged with organising what is a thought provoking and thoroughly engaging event on an annual basis.”

Speaking on behalf of Liberty Insurance at the launch, Annette Ní Dhathlaoi, Head of Marketing said, “We are delighted to build on our association with the GAA and Camogie Associations to become the title sponsor of the GAA National Games Development Conference.

“Liberty Insurance has a significant heritage in responsible coaching in the US, and we look forward to working closely with the Games Development committee in adding value to the continued development of all those involved with coaching within the wider GAA.”

For the second year Newstalk have come on board as official media partner to the conference.

The cost of attending is €50 and further information on registering to attend the Conference can be obtained by phone at 01-8658625, by emailing gamesdevelopment@gaa.ie or at www.learning.gaa.ie. 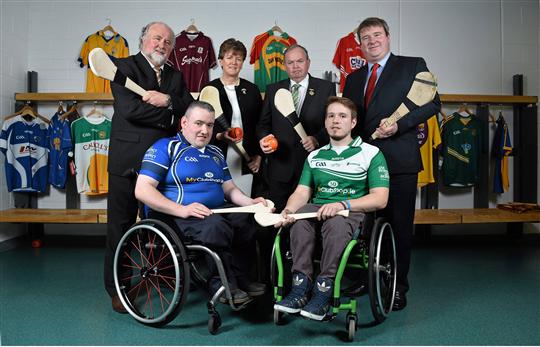 Senator Martin Conway said “CSO Census figures from 2011 shows that 13 per cent of the population or almost 600,000 people in Ireland have a disability.” He said further “that sport can be a valuable tool for bringing these people off the sidelines of social exclusion and back into the game and that attracting people with a disability into sport as participants , volunteers, coaches etc, may also have the ‘spill-over’ effect of bringing in parents, partners, siblings”

Camogie President Aileen Lawlor said: “Following on from our joint sponsorship agreement with Liberty Insurance, the M. Donnelly GAA Wheelchair Hurling Inter-Provincial Tournament is another great example of how we can bring our two codes closer together.

He said: "Our vision in the GAA is that everybody has the opportunity to be welcomed, to take part in our games and culture, to participate fully, to grow and develop and to be inspired to keep a lifelong engagement with our Association and that extends to both able-bodied and disabled players, alike”

"I wish all competing teams every success and I look forward to seeing some competitive action on the day and over the course of the competition".

For more information about the Inter-provincial Wheelchair Hurling Tournament contact Tony Watene on inclusion@gaa.ie or (01) 8363222.