USGAA announce the naming of National Championships after individuals who contributed to Gaelic Games in the US.

USGAA announce the naming of National Championships after individuals who contributed to Gaelic Games in the US.

USGAA continues a program to acknowledge the important contributions of many individuals to the growth of Gaelic Games in the US. In line with recent years, past members will be honored by the commemoration of different championship trophies with their names in recognition of their service to the organization.

“While Gaelic Games in the US has grown exponentially in the last 15 years, without the dedication and work of our past members, the foundations for that growth would not have existed”, said USGAA Chairperson Bernie Connaughton. “As we continue to develop and expand as an organization, it is only fitting that we recognize the importance of their contributions to our success.”

Mickey Cavanaugh hailed from County Mayo and emigrated to Philadelphia in the 1950’s, where he managed a number of bar-restaurants in the Philadelphia area with his brothers.

In 1959, the historic first meeting of the North American County Board took place in one of these bars. Along with others such as John O’Brien, Fr. Peter Quinn, Dan O’Kennedy, John Hehir and Jack Courtney, Mickey Cavanaugh was part of the formation of the first Committee of the NACB.

Initially working behind the scenes, and later as NACB Chairperson, Mickey led the drive to get all GAA clubs to join the NACB, overcoming many obstacles for the fledgling national GAA organization.

After serving as NACB Chair from 1960-63, and later as Honorary President, Mickey remained actie in the Philadelphia GAA scene until he returned to his native Mayo, where he operated a hotel for many years.

Originally from Castlebar, Co. Mayo, William (Bill) Garvey emigrated to the US in 1920 and became instrumental in the early growth of the North American Board.

After settling with his wife Margaret in Mendon, New York, Bill was a founding-member of the local Rochester Harps club in 1950. As its first Club President, Bill became a leading figure in the Midwest GAA league throughout the 1950’s.

In 1959, Bill became the first Treasurer of the newly formed North American Board, a role he held with distinction from 1959-1962.

Sean Gannon was born in Acres, Newport, County Mayo, where his love of Gaelic football was born. There he played for his local club, Burrishoole, featuring on the Mayo Minor team before emigrating to the U.S. in 1962.

Once in Cleveland, he joined the St. Pat’s football club, who he assisted in winning 4 North American Senior Championships in 5 years, a record at that time. In addition to playing for the St. Pat’s team, Sean was instrumental in spreading his passion for Gaelic Football to many young people, including his son, Sean, and three daughters who were on the first Cleveland Ladies’ team, Elizabeth, Siobhan and Mary. Numerous nephews, nieces, and grandchildren have found a passion for this game because of Sean.

Away from the meeting-rooms, Sean devoted countless weekends to cutting down trees and removing stumps, in order to secure the future of Gaelic Games in the Cleveland community, in the form of a pitch at the West Side Irish American Club. Prior to the advent of live-streaming of GAA games, Sean worked with Satellite Broadcasters to bring GAA games to the Irish Community in Cleveland.

In addition to being long time Chairman of St Pats, and serving on the Midwest Board, Sean was Chairman of the North American Board in the 80s and early 2000s, while also holding the position of Registrar in the 1990s.

Despite passing from chronic birth-related illnesses at the ages of 17-years and 26-years young, Stephen and Jason Breen were well known in the Philadelphia and North American GAA community.

Their father Sean was originally from Tyrone, and after settling in Philadelphia in the 1980’s, he was very involved with Philadelphia GAA and the Kevin Barry’s club in particular. Subsequently Sean became Chair of the Philadelphia Divisional Board, was a regular attendee at North American Conventions and Playoffs over many years, and devoted large amounts of his time to the development of the Limerick Field playing facility.

There is no doubt that were they running around today, Stephen and Jason Breen would be playing Gaelic Games, making proud parents of Sean and Kathleen.

“Each of these members served our Association in different but important ways.” said John O’Brien, one of the founding members of North American County Board in 1959. “Our goal in 1959 was to create a structure that brought all GAA people under the one umbrella. This then led to the emergence of events like this coming weekend’s USGAA Finals, where teams from each corner of the US compete for a National Championship.”

Founded in 1959, USGAA (previously North American County Board) is the Governing body of Gaelic Games in the US, outside of the area under the jurisdiction of the New York GAA Board.

With approximately 8,500 members at all codes, ages and levels, the pinnacle of the year is the UGAA Finals. This year’s showpiece event will see 122 teams play over 100 full-scale Championship games, as they compete for 22 National Titles across all 4 codes: Camogie, Football and Hurling.

To learn more about USGAA activities throughout the year, please visit: www.usgaa.org 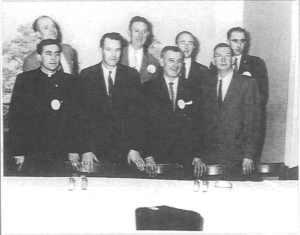