Latest
Clubs across Ireland are encouraged to apply for the GAA Healthy Club Project.
GAA and Camogie clubs already contribute greatly to the health and wellbeing of their members by providing opportunities to develop their physical, social, emotional, and psychological health.
This programme aims to assist clubs in this important work, help them identify areas where they would like to improve, and empower them to ensure that everyone who engages with their club benefits from the experience in a health-enhancing way.
The Community & Health team in Croke Park is looking to recruit at least one club from each county to join the 16 clubs that participated in Phase 1 (which ran from 2013 to 2015 pictured above).  Expressions of interest forms and full application details are available at:
http://www.gaa.ie/news/clubs-invited-apply-for-healthy-club-project-phase/
The deadline for applications is Friday, January 29, 2016.
Clubs that have previously taken part in this initiative reported increased membership, better member engagement with club activities, improvements in health promoting activities, strengthened links with the local community, and opening up new funding avenues.
Other development news includes:
·         Derry Club Forum coming soon
·         Camán Get a Grip as part of Gaisce Programme
·         20 teams take part in Derry Indoor Programme
·         Leinster League 2016
·         Coaches learn the Fundamentals- Antrim
Derry Club Forum coming soon 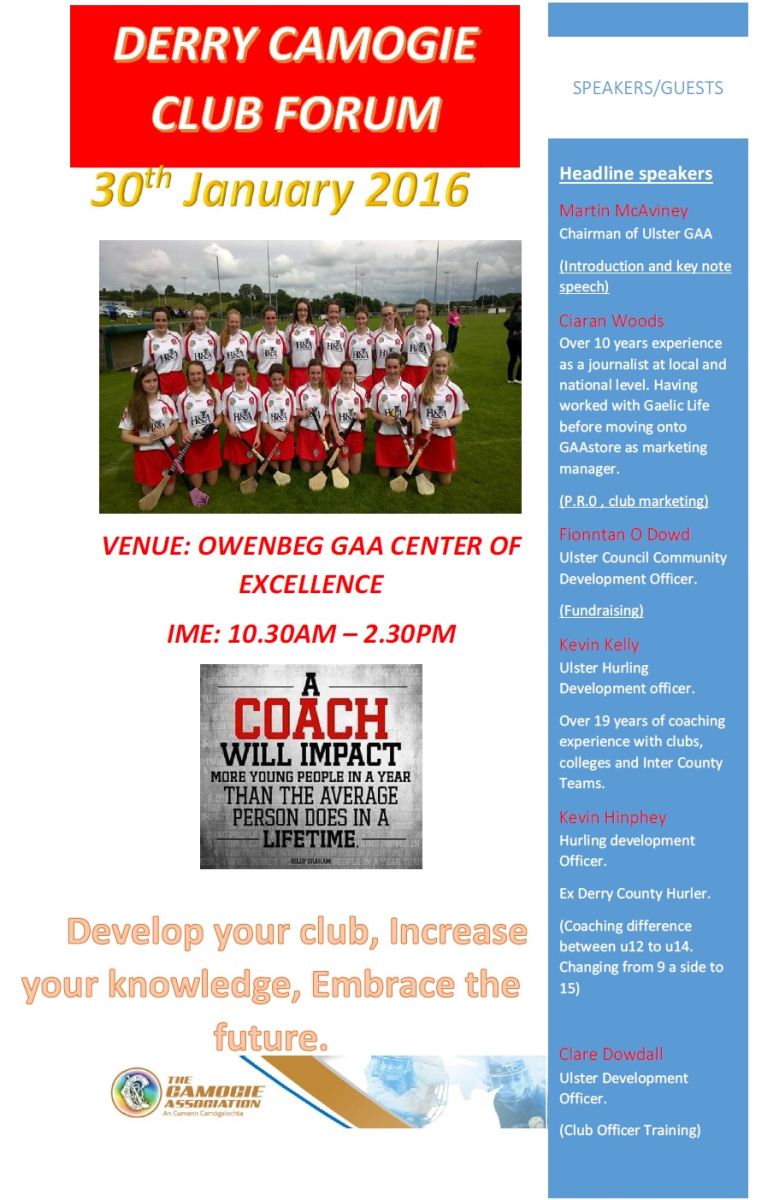 Camán Get a Grip as part of Gaisce Programme
A Camán Get a Grip Coaching Course took place in St.Mary’s Secondary school Charleville on Tuesday January 12th. Ross Corbett tutored on the course with 20 girls competing the course. The girls are linking up with the neighbouring primary school to coach camogie as part of their Gaisce Award. 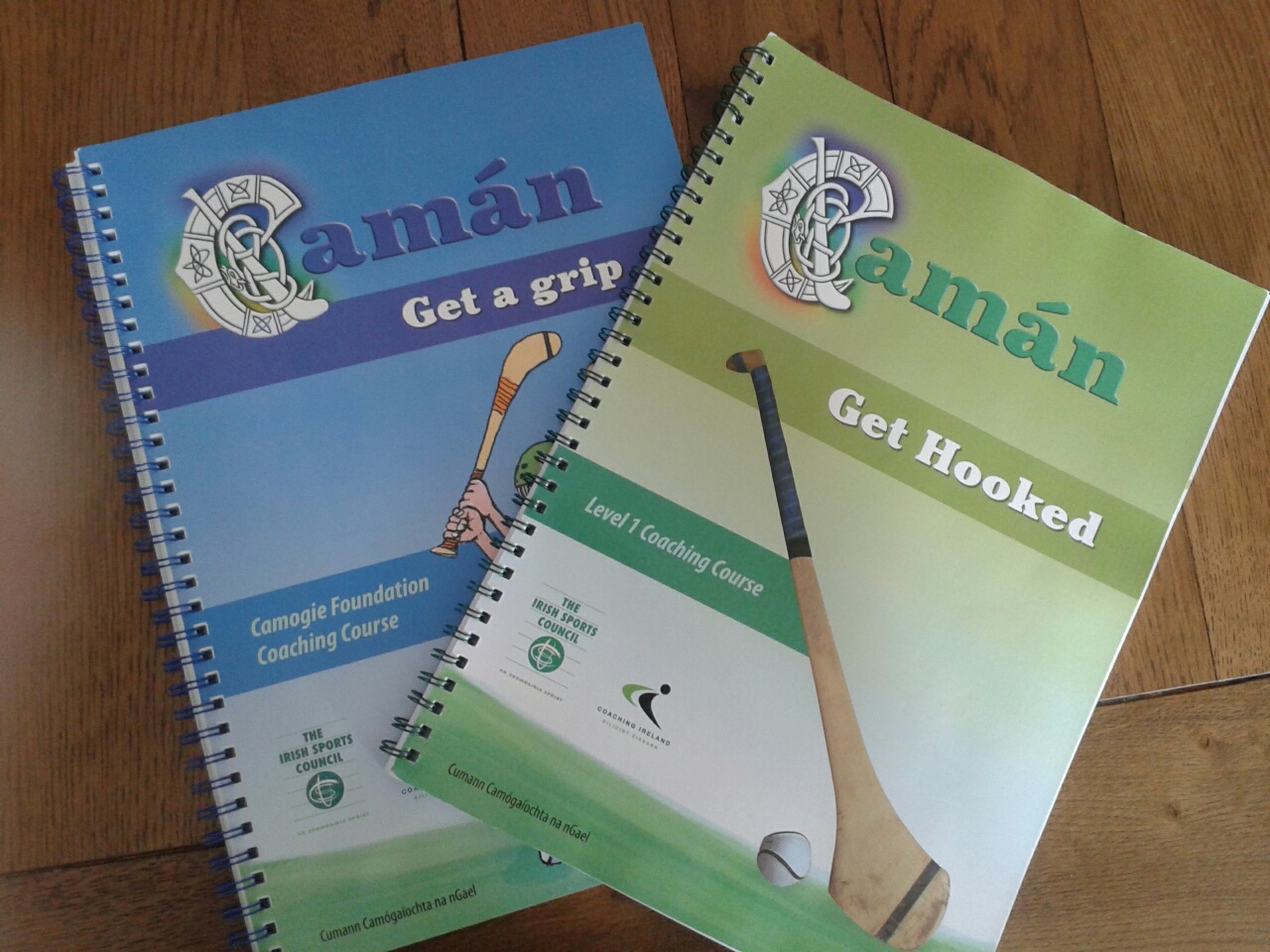 20 teams take part in Derry Indoor Programme
20 teams took part in the u8 and u10 Indoor blitz last weekend in Limavady and Meadowbank in Derry. 200 girls participated. Thanks to Caroline Wilson for co-ordinating the blitz that will continue over next few weeks. 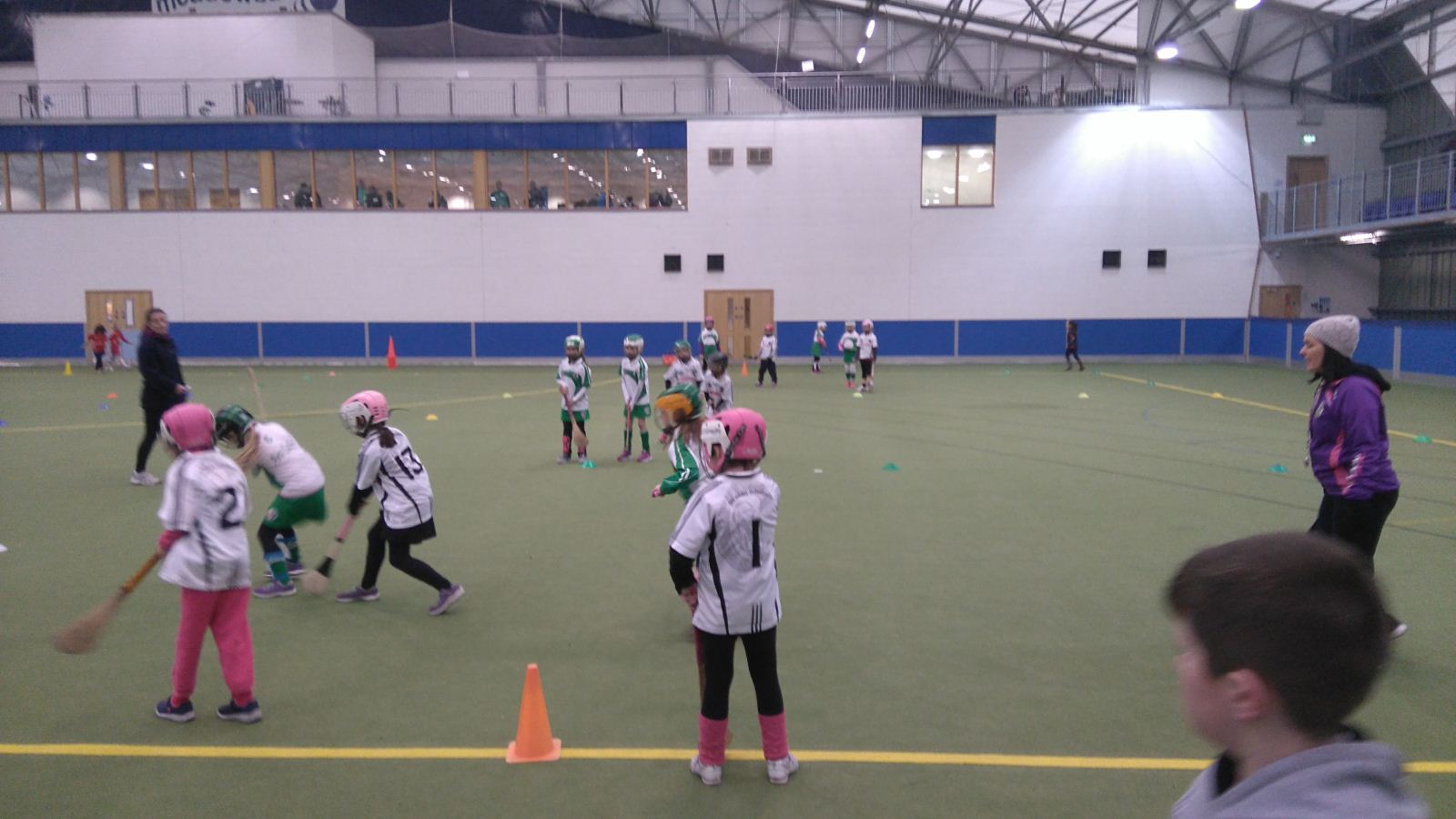 Derry Indoor Programme
Leinster League 2016
The Leinster League is a league for adult clubs in Leinster with the aim of giving clubs extra games across different counties in the province.
The league will take place from Mid-February to End of April.  All adult teams in Leinster are invited to enter with a number of grades available for clubs.
Please fill in the Application form and email to: eve.talbot@camogie.ie and return fee payable to address on form.
Closing Date: Tuesday January 26th.
For more information on this initiative contact Eve Talbot on e-mail above.
Coaches learn the Fundamentals- Antrim
19 coaches took part in a camogie Fundamental workshop on Saturday January 16th.
Six different clubs were represented at the Workshop with thanks to Grainne Connelly for organising the facilities. 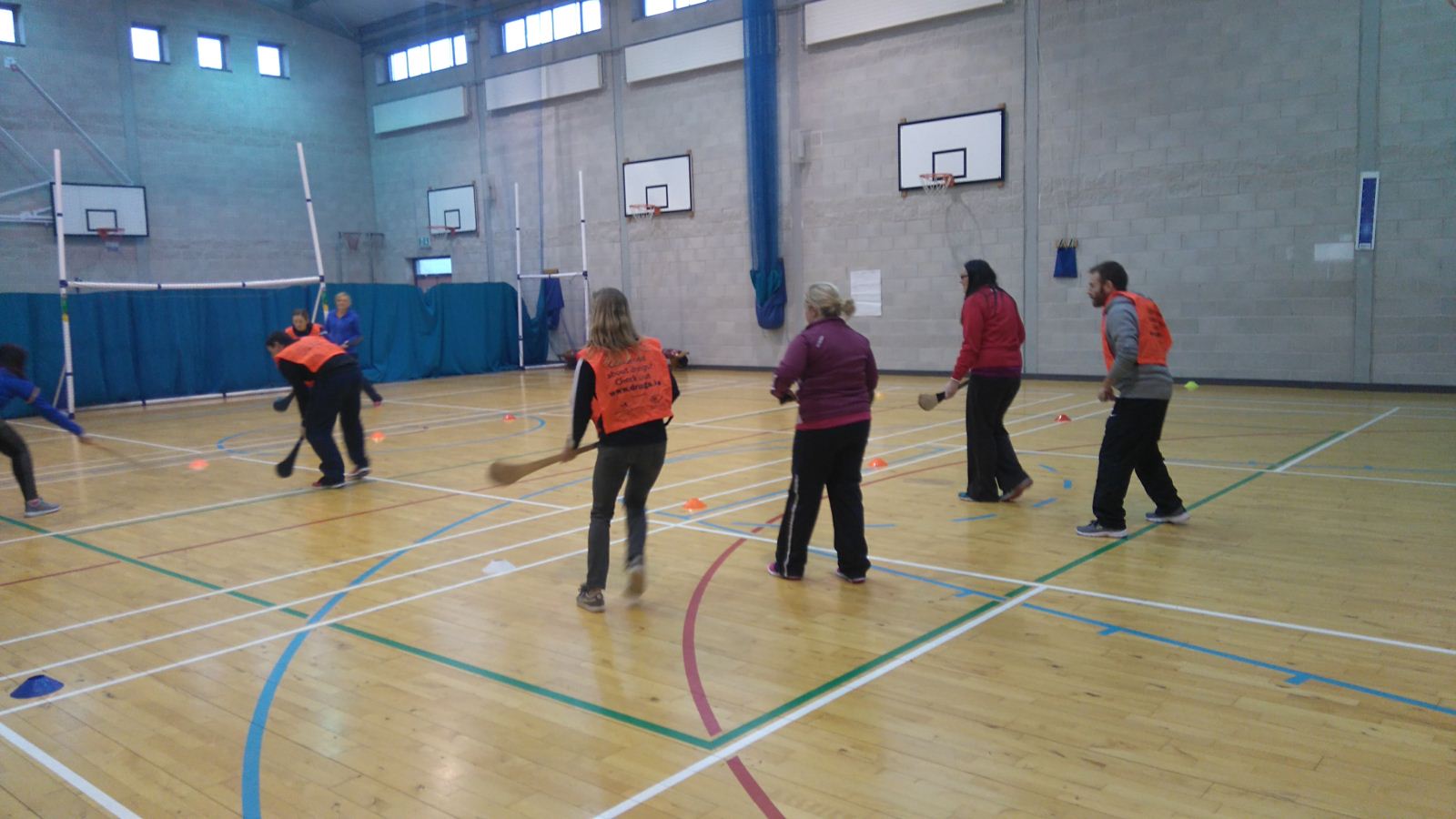 Action from the Fundamentals Workshop 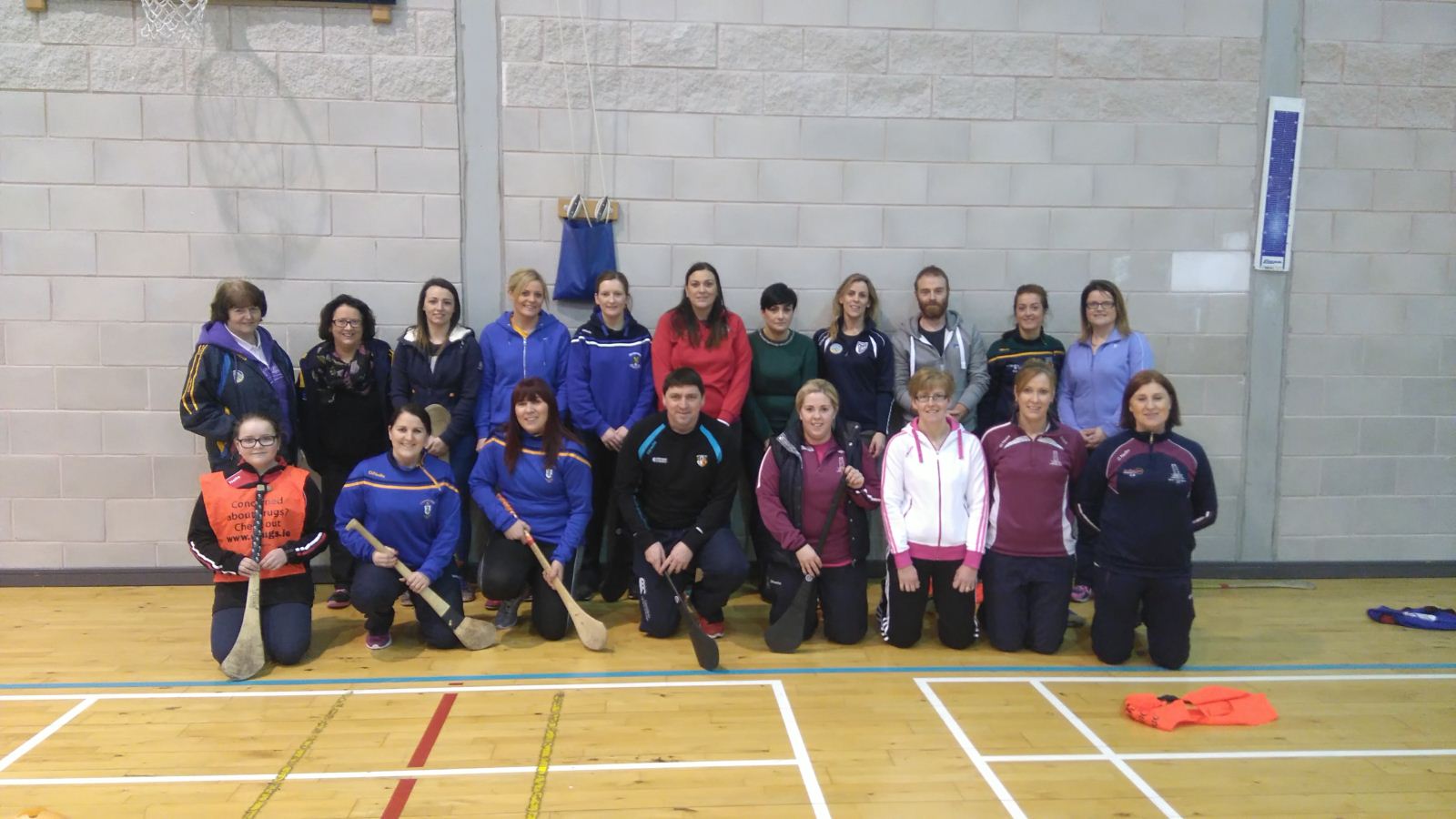 Coaches who took part in Workshop